The pyramid shaped maxillary sinus (or antrum of Highmore) is the largest of the paranasal sinuses, and drains into the nose. It is present at birth as rudimentary air cells, and develops throughout childhood.

Found in the body of the maxilla, this sinus has three recesses: an alveolar recess pointed inferiorly, bounded by the alveolar process of the maxilla; a zygomatic recess pointed laterally, bounded by the zygomatic bone; and an infraorbital recess pointed superiorly, bounded by the inferior orbital surface of the maxilla. The medial wall is composed primarily of cartilage. The ostia for drainage are located high on the medial wall and open into the semilunar hiatus of the lateral nasal cavity; because of the position of the ostia, gravity cannot drain the maxillary sinus contents when the head is erect. The sinus is lined with mucoperiosteum, with cilia that beat toward the ostia. This membrane is also referred to as the "Schneiderian Membrane", which is histologically a bilaminar membrane with ciliated columnar epithelial cells on the internal (or cavernous) side and periosteum on the osseous side. The size of the sinuses varies in different skulls, and even on the two sides of the same skull.

The infraorbital canal usually projects into the cavity as a well-marked ridge extending from the roof to the anterior wall; additional ridges are sometimes seen in the posterior wall of the cavity and are caused by the alveolar canals.

The mucous membranes receive their postganglionic parasympathetic nerve innervation for mucous secretion originating from the greater petrosal nerve (a branch of the facial nerve). The superior alveolar (anterior, middle, and posterior) nerves, branches of the maxillary nerve provide sensory innervation.

The maxillary sinus may drain into the mouth via an abnormal opening, an oroantral fistula, a particular risk after tooth extraction.

Its nasal wall, or base, presents, in the disarticulated bone, a large, irregular aperture, communicating with the nasal cavity.

In the articulated skull this aperture is much reduced in size by the following bones:

The sinus communicates through an opening into the semilunar hiatus on the lateral nasal wall. 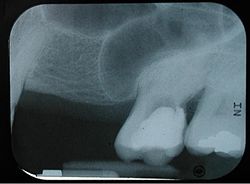 The maxillary sinus can normally be seen above the level of the premolar and molar teeth in the upper jaw. This dental x-ray film shows how, in the absence of the second premolar and first molar, the sinus became pneumatized and expanded towards the crest of the alveolar process (location at which the bone meets the gum tissue).

The floor is formed by the alveolar process of the maxilla, and, if the sinus is of an average size, is on a level with the floor of the nose; if the sinus is large it reaches below this level.

Projecting into the floor of the antrum are several conical processes, corresponding to the roots of the first and second molar teeth; in some cases the floor is perforated by the apices of the teeth.

Maxillary sinusitis is common due to the close anatomical relation of the frontal sinus, anterior ethmoidal air sinus and the maxillary teeth, allowing for easy spread of infection. Furthermore, the drainage orifice lies near the roof of the sinus, and so the maxillary sinus does not drain well, and infection develops more easily.

The treatment of acute maxillary sinusitis is usually prescription of a broad-spectrum cephalosporin antibiotic resistant to beta-lactamase, administered for 10 days.