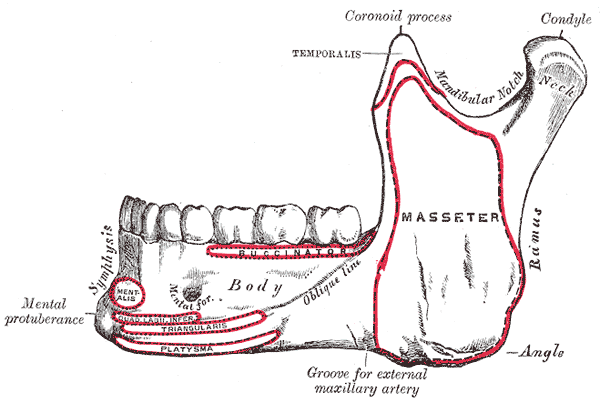 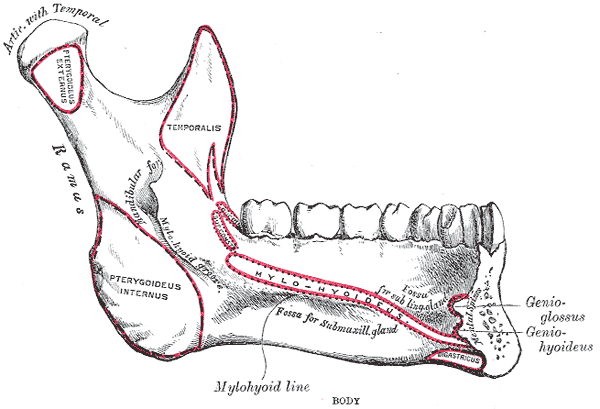 The external surface is marked in the median line by a faint ridge, indicating the symphysis or line of junction of the two pieces of which the bone is composed at an early period of life.

This ridge divides below and encloses a triangular eminence, the mental protuberance, the base of which is depressed in the center but raised on either side to form the mental tubercle.

On either side of the symphysis, just below the incisor teeth, is a depression, the incisive fossa, which gives origin to the and a small portion of the .

Below the second premolar tooth, on either side, midway between the upper and lower borders of the body, is the , for the passage of the and nerve.

Running backward and upward from each mental tubercle is a faint ridge, the oblique line, which is continuous with the anterior border of the ramus; it affords attachment to the (Quadratus labii inferioris) and (Triangularis); the is attached below it.

The internal surface is concave from side to side. Near the lower part of the symphysis is a pair of laterally placed spines, termed the mental spines, which give origin to the .

Immediately below these is a second pair of spines, or more frequently a median ridge or impression, for the origin of the .

In some cases the mental spines are fused to form a single eminence, in others they are absent and their position is indicated merely by an irregularity of the surface.

Above the mental spines a median foramen and furrow are sometimes seen; they mark the line of union of the halves of the bone.

Below the mental spines, on either side of the middle line, is an oval depression for the attachment of the anterior belly of the .

Extending upward and backward on either side from the lower part of the symphysis is the mylohyoid line, which gives origin to the ; the posterior part of this line, near the alveolar margin, gives attachment to a small part of the , and to the .

Above the anterior part of this line is a smooth triangular area against which the rests, and below the hinder part, an oval fossa for the .

The superior or alveolar border, wider behind than in front, is hollowed into cavities, for the reception of the teeth; these cavities are sixteen in number, and vary in depth and size according to the teeth which they contain. To the outer lip of the superior border, on either side, the is attached as far forward as the first molar tooth.

The inferior border is rounded, longer than the superior, and thicker in front than behind; at the point where it joins the lower border of the ramus a shallow groove; for the , may be present.