The human pharynx (plural: pharynges) is the part of the throat situated immediately posterior to (under) the mouth and nasal cavity, and anterior to the esophagus and larynx. The human pharynx is conventionally divided into three sections: the nasopharynx (epipharynx), the oropharynx (mesopharynx), and the laryngopharynx (hypopharynx). The pharynx is part of the digestive system and also the respiratory system; it is also important in vocalization.

The nasopharynx is the most cephalad portion of the pharynx. It extends from the base of the skull to the upper surface of the soft palate.[1] It includes the space between the internal nares and the soft palate and lies superior to the oral cavity. The pharyngeal tonsils, more commonly referred to as the adenoids, are lymphoid tissue structures located in the posterior wall of the nasopharynx. 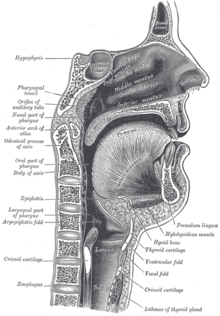 The nasopharynx, oropharynx, and laryngopharynx or larynx can be seen clearly in this sagittal section of the head and neck.

The anterior aspect of the nasopharynx communicates through the choanae with the nasal cavities. On its lateral walls are the pharyngeal ostia of the auditory tube, somewhat triangular in shape, and bounded behind by a firm prominence, the torus tubarius or cushion, caused by the medial end of the cartilage of the tube that elevates the mucous membrane. Two folds arise from the cartilaginous opening:

The oropharynx or mesopharynx lies behind the oral cavity, extending from the uvula to the level of the hyoid bone. It opens anteriorly, through the isthmus faucium, into the mouth, while in its lateral wall, between the two palatine arches[disambiguation needed

], is the palatine tonsil. The anterior wall consists of the base of the tongue and the epiglottic vallecula; the lateral wall is made up of the tonsil, tonsillar fossa, and tonsillar (faucial) pillars; the superior wall consists of the inferior surface of the soft palate and the uvula. Because both food and air pass through the pharynx, a flap of connective tissue called the epiglottis closes over the glottis when food is swallowed to prevent aspiration.The oropharynx is lined by non keratinised squamous stratified epithelium.

The laryngopharynx or hypopharynx (Latin: pars laryngea pharyngis) is the caudal part of the pharynx; it is the part of the throat that connects to the esophagus. It lies inferior to the epiglottis and extends to the location where this common pathway diverges into the respiratory (larynx) and digestive (esophagus) pathways. At that point, the laryngopharynx is continuous with the esophagus posteriorly. The esophagus conducts food and fluids to the stomach; air enters the larynx anteriorly. During swallowing, food has the "right of way", and air passage temporarily stops. Corresponding roughly to the area located between the 4th and 6th cervical vertebrae, the superior boundary of the laryngopharynx is at the level of the hyoid bone. The laryngopharynx includes three major sites: the pyriform sinus, postcricoid area, and the posterior pharyngeal wall. Like the oropharynx above it, the laryngopharynx serves as a passageway for food and air and is lined with a stratified squamous epithelium. It is innervated by the pharyngeal plexus.