The paired submandibular glands (submaxillary glands) are salivary glands located beneath the floor of the mouth. In humans, they account for 70% of the salivary volume and weigh about 15 grams. Unstimulated (at rest) in humans, the percentage contribution to whole saliva; ~25% Parotid, Submandibular and Sublingual ~ 67% and ~8% minor mucous glands. During stimulated secretion the parotid gland produces majority of the saliva.

Lying superior to the digastric muscles, each submandibular gland is divided into superficial and deep lobes, which are separated by the mylohyoid muscle:

Secretions are delivered into the Wharton's ducts on the deep portion after which they hook around the posterior edge of the mylohyoid muscle and proceed on the superior surface laterally. The ducts are then crossed by the lingual nerve, and ultimately drain into the sublingual caruncles on either side of the lingual frenulum along with the major sublingual duct (Bartholin). 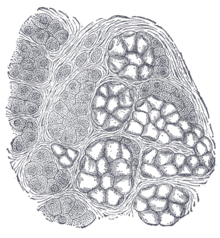 Lobes contain smaller lobules, which contain adenomeres, the secretory units of the gland. Each adenomere contains one or more acini, or alveoli, which are small clusters of cells that secrete their products into a duct. The acini of each adenomere are composed of either serous or mucous cells, with serous adenomeres predominating. Some mucous adenomeres may also be capped with a serous demilune, a layer of lysozyme-secreting serous cells resembling a half moon.

The submandibular gland's highly active acini account for approximately 70% of salivary volume. The parotid and sublingual glands account for the remaining 30%. 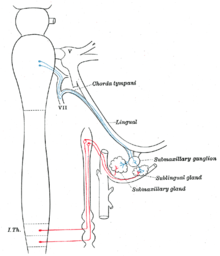 Parasympathetic and Sympathetic connections of the submaxillary and superior cervical ganglia.

The submandibular gland accounts for 80% of all salivary duct calculi, possibly due to the different nature of the saliva that it produces and that its duct is up-sloping.