The facial nerve is the seventh (VII) of twelve paired cranial nerves. It emerges from the brainstem between the pons and the medulla, and controls the muscles of facial expression, and functions in the conveyance of taste sensations from the anterior two-thirds of the tongue and oral cavity. It also supplies preganglionic parasympathetic fibers to several head and neck ganglia.

The motor part and sensory part of the facial nerve enters the petrous temporal bone into the internal auditory meatus (intimately close to the inner ear) then runs a tortuous course (including two tight turns) through the facial canal, emerges from the stylomastoid foramen and passes through the parotid gland, where it divides into five major branches. Though it passes through the parotid gland, it does not innervate the gland (This is the responsibility of cranial nerve IX, the glossopharyngeal nerve).

The facial nerve forms the geniculate ganglion prior to entering the facial canal. 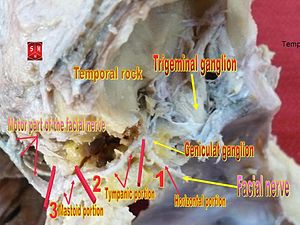 Outside skull (distal to stylomastoid foramen)

Intra operatively the facial nerve is recognised at 3 constant land marks:
1) At the tip of tragal cartilage where the nerve is 1cm deep and inferior
2) At the posterior belly of digastric by tracing this backwards to the tympanic plate the nerve can be found between these two structures
3) By locating the posterior facial vein at the inferior aspect of the gland where the marginal branch would be seen crossing it. 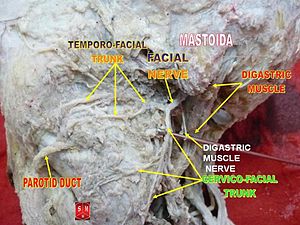 Its main function is motor control of most of the muscles of facial expression. It also innervates the posterior belly of the digastric muscle, the stylohyoid muscle, and the stapedius muscle of the middle ear. All of these muscles are striated muscles of branchiomeric origin developing from the 2nd pharyngeal arch.

The facial nerve also functions as the efferent limb of the corneal reflex.

In addition, it receives taste sensations from the anterior two-thirds of the tongue via the chorda tympani, taste sensation is sent to the gustatory portion of the solitary nucleus. General sensation from the anterior two-thirds of tongue are supplied by afferent fibers of the third division of the fifth cranial nerve (V-3). These sensory (V-3) and taste (VII) fibers travel together as the lingual nerve briefly before the chorda tympani leaves the lingual Nerve to enter the middle temporal fossa via the petrotympanic fissure. It thus joins the rest of the facial nerve in the internal acoustic meatus before synapsing in the solitary nucleus. The cell bodies of the Chorda tympani reside in the geniculate ganglion, and these parasympathetic fibers synapse at the submandibular ganglion, attached To the lingual nerve.

The facial nerve also supplies a small amount of afferent innervation to the oropharynx below the palatine tonsil. There is also a small amount of cutaneous sensation carried by the nervus intermedius from the skin in and around the auricle (earlobe).

Upon reaching the temporal bone, the nerve's path can be divided into the internal auditory canal, labrynthine segment, intratympanic segment, and descending or vertical segment. The labrynthine segment is the narrowest portion of this pathway and is described to be approximately 0.7mm in diameter. The descending segment is the area where the branches of the chorda tympani and nerve to the stapedius branch from the facial nerve. The facial nerve eventually exits via the stylomastoid foramen to enter into the parotid where it branches into it's peripheral segments.

People may suffer from acute facial nerve paralysis, which is usually manifested by facial paralysis. Bell's palsy is one type of idiopathic acute facial nerve paralysis, which is more accurately described as a multiple cranial nerve ganglionitis that involves the facial nerve, and most likely results from viral infection and also sometimes as a result of Lyme disease. Iatrogenic Bell's Palsy may also be as a result of an incorrectly placed dental local-anesthetic (Inferior alveolar nerve block). Although giving the appearance of a hemi-plegic stroke, effects dissipate with the drug.

Voluntary facial movements, such as wrinkling the brow, showing teeth, frowning, closing the eyes tightly (inability to do so is called lagophthalmos)[1] , pursing the lips and puffing out the cheeks, all test the facial nerve. There should be no noticeable asymmetry.

In an UMN lesion, called central seven, only the lower part of the face on the contralateral side will be affected, due to the bilateral control to the upper facial muscles (frontalis and orbicularis oculi).

Lower motor neuron lesions can result in a CNVII palsy (Bell's palsy is the term used to describe the idiopathic form of facial nerve palsy), manifested as both upper and lower facial weakness on the same side of the lesion.

Taste can be tested on the anterior 2/3 of the tongue. This can be tested with a swab dipped in a flavoured solution, or with electronic stimulation (similar to putting your tongue on a battery).

Corneal reflex. The afferent arc is mediated by the General Sensory afferents of the Trigeminal Nerve. The efferent arc occurs via the Facial Nerve. The reflex involves consensual blinking of both eyes in response to stimulation of one eye. This is due to the Facial Nerve's innervation of the muscles of facial expression, namely Orbicularis oculi, responsible for blinking. Thus, the corneal reflex effectively tests the proper functioning of both Cranial Nerves V and VII.