The otic ganglion is a small, oval shaped, flattened parasympathetic ganglion of a reddish-gray color, located immediately below the foramen ovale in the infratemporal fossa. It gives innervation to the parotid gland for salivation.

It is one of four parasympathetic ganglia of the head and neck. (The others are the submandibular ganglion, pterygopalatine ganglion, and ciliary ganglion).

It is occasionally absent.[1]

Filaments that pass through the ganglion without synapsing:

Its sympathetic postganglionic fibers consists of a filament from the plexus surrounding the middle meningeal artery.

A slender filament (sphenoidal) ascends from it to the nerve of the Pterygoid canal, and a small branch connects it with the chorda tympani.

It is connected by two or three short filaments with the nerve to the Pterygoideus internus, from which it may obtain a motor, and possibly a sensory root. 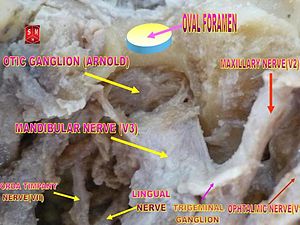 The former passes backward, lateral to the auditory tube; the latter arises from the ganglion, near the origin of the nerve to the Pterygoideus internus, and is directed forward.

The fibers of these nerves are, however, mainly derived from the nerve to the Pterygoideus internus.