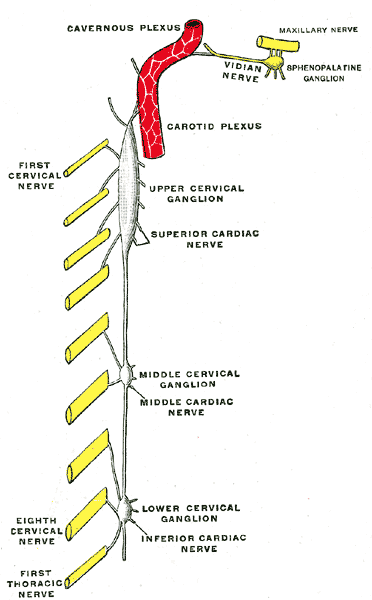 
Caption2 =
Innervates =
BranchFrom =
BranchTo =
MeshName =
MeshNumber =
DorlandsPre = n_05
DorlandsSuf = 12565306
The superior cardiac nerve arises by two or more branches from the , and occasionally receives a filament from the trunk between the first and second cervical ganglia.

The course of the nerves on the two sides then differ.

The right nerve, at the root of the neck, passes either in front of or behind the , and along the to the back of the arch of the aorta, where it joins the deep part of the .

It is connected with other branches of the sympathetic; about the middle of the neck it receives filaments from the external laryngeal nerve; lower down, one or two twigs from the ; and as it enters the thorax it is joined by a filament from the recurrent nerve.

Filaments from the nerve communicate with the thyroid branches from the .

The left nerve, in the thorax, runs in front of the left and across the left side of the , to the superficial part of the .