The maxillary nerve (CN V2) is one of the three branches of the trigeminal nerve, the fifth cranial nerve. It comprises the principal functions of sensation from the maxillary, nasal cavity, sinuses, the palate and subsequently that of the mid-face,[1] and is intermediate, both in position and size, between the ophthalmic nerve and the mandibular nerve. Its function is the transmission of sensory fibers from the maxillary teeth, the skin between the palpebral fissure and the mouth, and from the nasal cavity and sinuses.[2]

An illustration of the path of the Maxillary nerve.

Anterior to the trigeminal ganglion, the maxillary nerve passes through the cavernous sinus and exits the skull through the foramen rotundum. 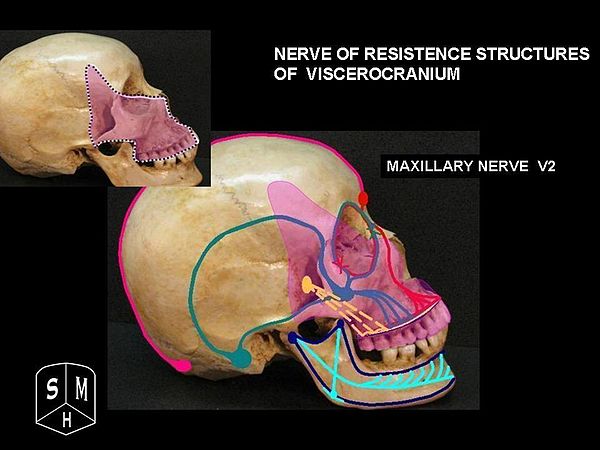 It begins at the middle of the trigeminal ganglion as a flattened plexiform band, and, passing horizontally forward, it leaves the skull through the foramen rotundum, where it becomes more cylindrical in form, and firmer in texture.

It then crosses the pterygopalatine fossa, inclines lateralward on the back of the maxilla, and enters the orbit through the inferior orbital fissure; it traverses the infraorbital groove and canal in the floor of the orbit, and appears upon the face at the infraorbital foramen. Here is it referred to as the infraorbital nerve, a terminal branch.

At its termination, the nerve lies beneath the quadratus labii superioris, and divides into a leash of branches which spread out upon the side of the nose, the lower eyelid, and the upper lip, joining with filaments of the facial nerve.

Its branches may be divided into four groups, depending upon where they branch off: in the cranium, in the pterygopalatine fossa, in the infraorbital canal, or on the face.

From the pterygopalatine fossa

In the infraorbital fissure