Human cranial nerves are nerves similar to those found in many other vertebrates. Cranial nerves XI and XII evolved in other species to amniotes (non-amphibian tetrapods), thus totaling twelve pairs. In some primitive cartilaginous fishes, such as the spiny dogfish or mud shark (Squalus acanthias), there is a terminal nerve numbered zero, since it exits the brain before the traditionally designated first cranial nerve. Because they exit from the brainstem as opposed to the spinal column, these are part of the central nervous system. 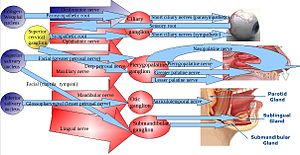 Main article: List of mnemonics for the cranial nerves

As the list is important to keep in mind during the examination of the nervous system, there are many mnemonic devices in circulation to help remember the names and order of the cranial nerves. Because the mind recalls rhymes well, the best mnemonics often use rhyming schemes.

A useful mnemonic for remembering which nerves are motor (M), sensory (S), or both (B) is, "Some Say Money Matters But My Brother Says Big Brains Matter Most". There are many more mnemonics from many sources, for example OLd OPie OCcasionally TRies TRIGonometry And Feels VEry GLOomy, VAGUe, And HYPOactive.[6]