The midbrain or mesencephalon (from the Greek mesos - middle, and enkephalos - brain[1]) is a portion of the central nervous system associated with vision, hearing, motor control, sleep/wake, arousal (alertness), and temperature regulation.[2]

Anatomically, it comprises the tectum (or corpora quadrigemina), tegmentum, the ventricular mesocoelia (or "iter"), and the cerebral peduncles, as well as several nuclei and fasciculi. Caudally the mesencephalon adjoins the pons (metencephalon) and rostrally it adjoins the diencephalon (Thalamus, hypothalamus, etc.). The midbrain is located below the cerebral cortex, and above the hindbrain placing it near the center of the brain.[3]

Throughout embryonic development, the cells within the midbrain continually multiply and compress the still-forming Aqueduct of Sylvius or cerebral aqueduct. Partial or total obstruction of the cerebral aqueduct during development can lead to congenital hydrocephalus.[5]

The mesencephalon is considered part of the brainstem. Its substantia nigra is closely associated with motor system pathways of the basal ganglia. The human mesencephalon is archipallian in origin, meaning its general architecture is shared with the most ancient of vertebrates. Dopamine produced in the substantia nigra plays a role in motivation and habituation of species from humans to the most elementary animals such as insects.

The cerebral peduncles are paired structures, present on the ventral side of cerebral aqueduct, and they further carry tegmentum on the dorsal side and cresta or pes on the ventral side, and both of them accommodate the corticospinal tract fibres, from the internal capsule (i.e. ascending + descending tracts = longitudinal tract.) the middle part of cerebral peduncles carry substantia nigra (also called "Black Matter") which is a type of basal nucleus. It is the only part of the brain that carries melanin pigment.

Anatomical features of cross-sections through the midbrain

The midbrain is usually sectioned at the level of the superior and inferior colliculi.

One mnemonic for remembering the structures of the midbrain involves visualizing the mesencephalic cross-section as an upside down bear face. The two red nuclei are the eyes of the bear and the cerebellar peduncles are the ears. 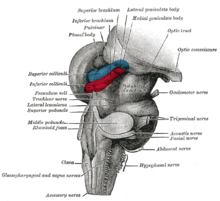