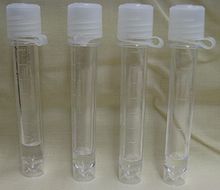 Cerebrospinal fluid (CSF), Liquor cerebrospinalis, is a clear, colorless, salty bodily fluid, that occupies the subarachnoid space and the ventricular system around and inside the brain and spinal cord. In essence, the brain "floats" in it.

The CSF occupies the space between the arachnoid mater (the middle layer of the brain cover, meninges), and the pia mater (the layer of the meninges closest to the brain). It constitutes the content of all intra-cerebral (inside the brain, cerebrum) ventricles, cisterns, and sulci (singular sulcus), as well as the central canal of the spinal cord.

It acts as a "cushion" or buffer for the cortex, providing a basic mechanical and immunological protection to the brain inside the skull.

It is produced in the choroid plexus.

CSF is produced in the brain by modified ependymal cells in the choroid plexus (approx. 50-70%), and the remainder is formed around blood vessels and along ventricular walls. It circulates from the lateral ventricles to the foramen of Monro (Interventricular foramen), third ventricle, aqueduct of Sylvius (Cerebral aqueduct), fourth ventricle, foramen of Magendie (Median aperture) and foramina of Luschka (Lateral apertures); subarachnoid space over brain and spinal cord. CSF is reabsorbed into venous sinus blood via arachnoid granulations.

It had been thought that CSF returns to the vascular system by entering the dural venous sinuses via the arachnoid granulations (or villi). However, some[1] have suggested that CSF flow along the cranial nerves and spinal nerve roots allow it into the lymphatic channels; this flow may play a substantial role in CSF reabsorbtion, in particular in the neonate, in which arachnoid granulations are sparsely distributed. The flow of CSF to the nasal submucosal lymphatic channels through the cribriform plate seems to be especially important.[2]

The CSF is produced at a rate of 500 ml/day. Since the brain can contain only 135 to 150 ml, large amounts are drained primarily into the blood through arachnoid granulations in the superior sagittal sinus. Thus the CSF turns over about 3.7 times a day. This continuous flow into the venous system dilutes the concentration of larger, lipoinsoluble molecules penetrating the brain and CSF.[5]

There are quantitative differences in the distributions of a number of proteins in the CSF. In general, globular proteins and albumin are in lower concentration in ventricular CSF compared to lumbar or cisternal fluid.[6] 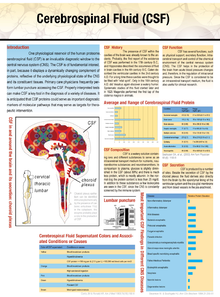 When CSF pressure is elevated, cerebral blood flow may be constricted. When disorders of CSF flow occur, they may therefore affect not only CSF movement but also craniospinal compliance and the intracranial blood flow, with subsequent neuronal and glial vulnerabilities. The venous system is also important in this equation. Infants and patients shunted as small children may have particularly unexpected relationships between pressure and ventricular size, possibly due in part to venous pressure dynamics. This may have significant treatment implications, but the underlying pathophysiology needs to be further explored.

CSF connections with the lymphatic system have been demonstrated in several mammalian systems. Preliminary data suggest that these CSF-lymph connections form around the time that the CSF secretory capacity of the choroid plexus is developing (in utero). There may be some relationship between CSF disorders, including hydrocephalus and impaired CSF lymphatic transport.

CSF can be tested for the diagnosis of a variety of neurological diseases.[9] It is usually obtained by a procedure called lumbar puncture. Removal of CSF during lumbar puncture can cause a severe headache after the fluid is removed, because the brain hangs on the vessels and nerve roots, and traction on them stimulates pain fibers. The pain can be relieved by intrathecal injection of sterile isotonic saline. Lumbar puncture is performed in an attempt to count the cells in the fluid and to detect the levels of protein and glucose. These parameters alone may be extremely beneficial in the diagnosis of subarachnoid hemorrhage and central nervous system infections (such as meningitis). Moreover, a CSF culture examination may yield the microorganism that has caused the infection. By using more sophisticated methods, such as the detection of the oligoclonal bands, an ongoing inflammatory condition (for example, multiple sclerosis) can be recognized. A beta-2 transferrin assay is highly specific and sensitive for the detection for, e.g., CSF leakage.

A 2010 study showed analysis of CSF for three protein biomarkers can indicate the presence of Alzheimer's disease. The three biomarkers are CSF amyloid beta 1-42, total CSF tau protein and P-Tau181P. In the study, the biomarker test showed good sensitivity, identifying 90% of persons with Alzheimer's disease, but poor specificity, as 36% of control subjects were positive for the biomarkers. The researchers suggested the low specificity may be explained by developing but not yet symptomatic disease in controls.[10][11]