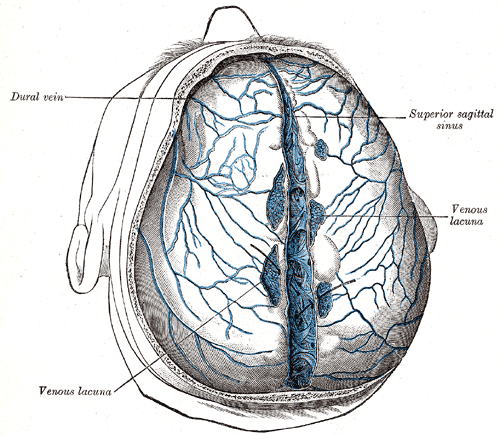 The sinus drains, along the top and back of the brain, to the , then to the (at the center of the head), at the . "See diagram (at right)": labeled above the brain as "SIN. SAGITALLIS SUP." (for Latin: "sinus sagittalis superior").

The superior sagittal sinus occupies the attached or convex margin of the .

Commencing at the , through which it receives a vein from the nasal cavity, it runs from anterior to posterior, grooving the inner surface of the frontal, the adjacent margins of the two , and the superior division of the cruciate eminence of the ; near the , it deviates to either side (usually the right), and is continued as the corresponding .

It is triangular in section, narrow in front, and gradually increases in size as it passes backward.

Its inner surface presents the openings of the , which run, for the most part, obliquely forward, and open chiefly at the back part of the sinus, their orifices being concealed by fibrous folds; numerous fibrous bands (chordæ Willisii) extend transversely across the inferior angle of the sinus; and, lastly, small openings communicate with irregularly shaped venous spaces (venous lacunæ) in the dura mater near the sinus.

There are usually three on either side of the sinus: a small frontal, a large parietal, and an occipital, intermediate in size between the other two.

Most of the cerebral veins from the outer surface of the hemisphere open into these lacunæ, and numerous arachnoid granulations (Pacchionian bodies) project into them from below.