Brain herniation, also known as cistern obliteration, is a deadly side effect of very high intracranial pressure that occurs when the brain shifts across structures within the skull. The brain can shift by such structures as the falx cerebri, the tentorium cerebelli, and even through the hole called the foramen magnum in the base of the skull (through which the spinal cord connects with the brain). Herniation can be caused by a number of factors that cause a mass effect and increase intracranial pressure (ICP): these include traumatic brain injury, stroke, or brain tumor.[1] Because herniation puts extreme pressure on parts of the brain and thereby cuts off the blood supply to various parts of the brain, it is often fatal. Therefore, extreme measures are taken in hospital settings to prevent the condition by reducing intracranial pressure. Herniation can also occur in the absence of high ICP when mass lesions such as hematomas occur at the borders of brain compartments.[2] 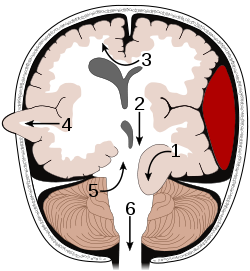 In uncal herniation, a common subtype of transtentorial herniation, the innermost part of the temporal lobe, the uncus, can be squeezed so much that it goes by the tentorium and puts pressure on the brainstem, most notably the midbrain.[5] The tentorium is a structure within the skull formed by the meningeal layer of the dura mater. Tissue may be stripped from the cerebral cortex in a process called decortication.[6]

The uncus can squeeze the third cranial nerve, which may affect the parasympathetic input to the eye on the side of the affected nerve, causing the pupil of the affected eye to dilate and fail to constrict in response to light as it should. Pupillary dilation often precedes the somatic motor effects of cranial nerve III compression, which present as deviation of the eye to a "down and out" position due to loss of innervation to all ocular motility muscles except for the lateral rectus (innervated by cranial nerve VI) and the superior oblique (innervated by cranial nerve IV). The symptoms occur in this order because the parasympathetic fibers surround the motor fibers of CNIII and are hence compressed first.

Another important finding is a false localizing sign, the so called Kernohan's notch, which results from compression of the contralateral cerebral crus containing descending corticospinal and some corticobulbar tract fibers. This leads to ipsilateral (same side as herniation) hemiparesis. Since the corticospinal tract predominately innervates flexor muscles, extension of the leg may also be seen. With increasing pressure and progression of the hernia there will be distortion of the brainstem leading to Duret hemorrhages (tearing of small vessels in the parenchyma) in the median and paramedian zones of the mesencephalon and pons. The rupture of these vessels leads to linear or flamed shaped hemorrhages. The disrupted brainstem can lead to decorticate posture, respiratory center depression and death. Other possibilities resulting from brain stem distortion include lethargy, slow heart rate, and pupil dilation.[6] Uncal herniation may advance to central herniation.[4]

A complication of an uncal herniation is a Duret hemorrhage. This results in the midbrain and pons being compressed, possibly causing damage to the reticular formation. If untreated, death will ensue.

In central herniation, the diencephalon and parts of the temporal lobes of both of the cerebral hemispheres are squeezed through a notch in the tentorium cerebelli.[5][7] Transtentorial herniation can occur when the brain moves either up or down across the tentorium, called ascending and descending transtentorial herniation respectively; however descending herniation is much more common.[1] Downward herniation can stretch branches of the basilar artery (pontine arteries), causing them to tear and bleed, known as a Duret hemorrhage. The result is usually fatal.[7] Radiographically, downward herniation is characterized by obliteration of the suprasellar cistern from temporal lobe herniation into the tentorial hiatus with associated compression on the cerebral peduncles. Upwards herniation, on the other hand, can be radiographically characterized by obliteration of the quadrigeminal cistern. Intracranial hypotension syndrome has been known to mimic downwards transtentorial herniation.

In transcalvarial herniation, the brain squeezes through a fracture or a surgical site in the skull.[4] Also called "external herniation", this type of herniation may occur during craniectomy, surgery in which a flap of skull is removed, preventing the piece of skull from being replaced.[1]

In tonsillar herniation, also called downward cerebellar herniation,[4] or "coning", the cerebellar tonsils move downward through the foramen magnum possibly causing compression of the lower brainstem and upper cervical spinal cord as they pass through the foramen magnum.[5] Increased pressure on the brainstem can result in dysfunction of the centers in the brain responsible for controlling respiratory and cardiac function.

Tonsillar herniation of the cerebellum is also known as a Chiari Malformation (CM), or previously an Arnold Chiari Malformation (ACM). There are at least three types of Chiari malformation that are widely recognized, and they represent very different disease processes with different symptoms and prognosis. These conditions can be found in asymptomatic patients as an incidental finding, or can be so severe as to be life-threatening. This condition is now being diagnosed more frequently by radiologists, as more and more patients undergo MRI scans of their heads. Cerebellar ectopia is a term used by radiologists to describe cerebellar tonsils that are "low lying" but that do not meet the radiographic criteria for definition as a Chiari malformation. The currently accepted radiographic definition for a Chiari malformation is that cerebellar tonsils lie at least 5mm below the level of the foramen magnum. Some clinicians have reported that some patients appear to experience symptoms consistent with a Chiari malformation without radiographic evidence of tonsillar herniation. Sometimes these patients are described as having a 'Chiari [type] 0'.

There are many suspected causes of tonsillar herniation including: decreased or malformed posterior fossa (the lower, back part of the skull) not providing enough room for the cerebellum; hydrocephalus or abnormal CSF volume pushing the tonsils out. Connective tissue disorders, such as Ehlers Danlos Syndrome, can be associated. Grant

For further evaluation of tonsillar herniation, CINE flow studies are used. This type of MRI examines flow of CSF at the cranio-cervical joint. For persons experiencing symptoms with seemingly Max herniation, especially if the symptoms are better in the supine position and worse upon standing/upright, an upright MRI may be useful.[2]

Brain herniation frequently presents with abnormal posturing[2] a characteristic positioning of the limbs indicative of severe brain damage. These patients have a lowered level of consciousness, with Glasgow Coma Scores of three to five.[2] One or both pupils may be dilated and fail to constrict in response to light.[2] Vomiting can also occur due to compression of the vomiting center in the medulla oblongata. 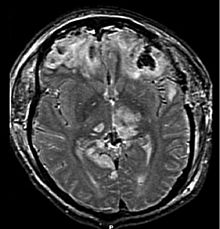 MRI showing damage due to herniation. This patient was left with residual disabilities including those involving movement and speech.[10]

Treatment involves removal of the etiologic mass and decompressive craniectomy. Brain herniation can cause severe disability or death. In fact, when herniation is visible on a CT scan, the prognosis for a meaningful recovery of neurological function is poor.[2] The patient may become paralyzed on the same side as the lesion causing the pressure, or damage to parts of the brain caused by herniation may cause paralysis on the side opposite the lesion.[7] Damage to the midbrain, which contains the reticular activating network that regulates consciousness will result in coma.[7] Damage to the cardio-respiratory centers in the medulla oblongata will cause respiratory arrest and (secondarily) cardiac arrest.[7] Current investigation is underway regarding the use of neuroprotective agents during the prolonged post-traumatic period of brain hypersensitivity associated with the syndrome.