Disruptions in sleep can be caused by a variety of issues, from teeth grinding (bruxism) to night terrors. When a person suffers from difficulty in sleeping with no obvious cause, it is referred to as insomnia.[1] In addition, sleep disorders may also cause sufferers to sleep excessively, a condition known as hypersomnia. Management of sleep disturbances that are secondary to mental, medical, or substance abuse disorders should focus on the underlying conditions.

The most common sleep disorders include:

Treatments for sleep disorders generally can be grouped into four categories:

None of these general approaches is sufficient for all patients with sleep disorders. Rather, the choice of a specific treatment depends on the patient's diagnosis, medical and psychiatric history, and preferences, as well as the expertise of the treating clinician. Often, behavioral/psychotherapeutic and pharmacological approaches are not incompatible and can effectively be combined to maximize therapeutic benefits. Management of sleep disturbances that are secondary to mental, medical, or substance abuse disorders should focus on the underlying conditions.

Medications and somatic treatments may provide the most rapid symptomatic relief from some sleep disturbances. Some disorders, such as narcolepsy, are best treated pharmacologically. Others, such as chronic and primary insomnia, may be more amenable to behavioral interventions, with more durable results.

Chronic sleep disorders in childhood, which affect some 70% of children with developmental or psychological disorders, are under-reported and under-treated. Sleep-phase disruption is also common among adolescents, whose school schedules are often incompatible with their natural circadian rhythm. Effective treatment begins with careful diagnosis using sleep diaries and perhaps sleep studies. Modifications in sleep hygiene may resolve the problem, but medical treatment is often warranted.[3]

Special equipment may be required for treatment of several disorders such as obstructive apnea, the circadian rhythm disorders and bruxism. In these cases, when severe, an acceptance of living with the disorder, however well managed, is often necessary.

Some sleep disorders have been found to compromise glucose metabolism.[4] 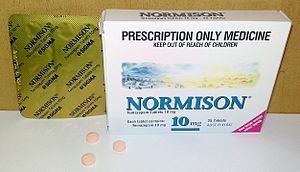 Normison (temazepam) is a benzodiazepine commonly prescribed for insomnia and other sleep disorders.[5]

Due to rapidly increasing knowledge about sleep in the 20th century, including the discovery of REM sleep and sleep apnea, the medical importance of sleep was recognized. The medical community began paying more attention than previously to primary sleep disorders, such as sleep apnea, as well as the role and quality of sleep in other conditions. By the 1970s in the USA, clinics and laboratories devoted to the study of sleep and sleep disorders had been founded, and a need for standards arose.

Sleep Medicine is now a recognized subspecialty within internal medicine, family medicine, pediatrics, otolaryngology, psychiatry and neurology in the United States. Certification in Sleep Medicine shows that the specialist:

"has demonstrated expertise in the diagnosis and management of clinical conditions that occur during sleep, that disturb sleep, or that are affected by disturbances in the wake-sleep cycle. This specialist is skilled in the analysis and interpretation of comprehensive polysomnography, and well-versed in emerging research and management of a sleep laboratory."[6]

Competence in sleep medicine requires an understanding of a myriad of very diverse disorders, many of which present with similar symptoms such as excessive daytime sleepiness, which, in the absence of volitional sleep deprivation, "is almost inevitably caused by an identifiable and treatable sleep disorder", such as sleep apnea, narcolepsy, idiopathic central nervous system (CNS) hypersomnia, Kleine-Levin syndrome, menstrual-related hypersomnia, idiopathic recurrent stupor, or circadian rhythm disturbances.[7] Another common complaint is insomnia, a set of symptoms which can have a great many different causes, physical and mental. Management in the varying situations differs greatly and cannot be undertaken without a correct diagnosis.

Sleep dentistry (bruxism, snoring and sleep apnea), while not recognized as one of the nine dental specialties, qualifies for board-certification by the American Board of Dental Sleep Medicine (ABDSM). The resulting Diplomate status is recognized by the American Academy of Sleep Medicine (AASM), and these dentists are organized in the Academy of Dental Sleep Medicine (USA).[8] The qualified dentists collaborate with sleep physicians at accredited sleep centers and can provide oral appliance therapy and upper airway surgery to treat or manage sleep-related breathing disorders.[9]

In the UK, knowledge of sleep medicine and possibilities for diagnosis and treatment seem to lag. Guardian.co.uk quotes the director of the Imperial College Healthcare Sleep Centre: "One problem is that there has been relatively little training in sleep medicine in this country – certainly there is no structured training for sleep physicians."[10] The Imperial College Healthcare site[11] shows attention to obstructive sleep apnea syndrome (OSA) and very few other sleep disorders.