Sleep paralysis is paralysis associated with sleep that may occur in healthy persons or may be associated with narcolepsy, cataplexy, and hypnagogic hallucinations. The pathophysiology of this condition is closely related to the normal hypotonia that occurs during REM sleep.[1] When considered to be a disease, isolated sleep paralysis is classified as MeSH D020188.[2] Some evidence suggests that it can also, in some cases, be a symptom of migraine.[3][4] 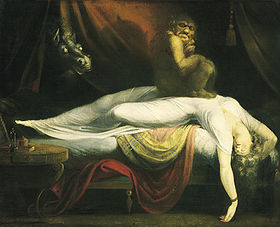 The Nightmare, by Henry Fuseli (1781) is thought to be one of the classic depictions of sleep paralysis perceived as a demonic visitation.

Physiologically, sleep paralysis is closely related to REM atonia, the paralysis that occurs as a natural part of REM (rapid eye movement) sleep. Sleep paralysis occurs either when falling asleep, or when awakening. When it occurs upon falling asleep, the person remains aware while the body shuts down for REM sleep, and it is called hypnagogic or predormital sleep paralysis. When it occurs upon awakening, the person becomes aware before the REM cycle is complete, and it is called hypnopompic or postdormital.[5] The paralysis can last from several seconds to several minutes, with some rare cases being hours, "by which the individual may experience panic symptoms"[6] (described below). As the correlation with REM sleep suggests, the paralysis is not entirely complete; use of EOG traces shows that eye movement is still possible during such episodes.[7] When there is an absence of narcolepsy, sleep paralysis is referred to as isolated sleep paralysis (ISP).[8]

In addition, the paralysis may be accompanied by terrifying hallucinations (hypnopompic or hypnagogic) and an acute sense of danger.[9] Sleep paralysis is particularly frightening to the individual because of the vividness of such hallucinations.[8] The hallucinatory element to sleep paralysis makes it even more likely that someone will interpret the experience as a dream, since completely fanciful or dream-like objects may appear in the room alongside one's normal vision. Some scientists have proposed this condition as an explanation for alien abductions and ghostly encounters.[10] A study by Susan Blackmore and Marcus Cox (the Blackmore-Cox study) of the University of the West of England supports the suggestion that reports of alien abductions are related to sleep paralysis rather than to temporal lobe lability.[11] Some authors have warned of the possible misconnection between child sexual abuse (CSA) and hypnagogic/pompic phenomena and have noted that some clients after having described such an event to a fortune teller or psychic that the psychic may have suggested CSA.[12][13]

Some reports read that various factors increase the likelihood of both paralysis and hallucinations. These include:

In The Terror That Comes in the Night, folklorist and behavioral scientist David J. Hufford argues that sleep paralysis is related to an anomalous experience known in Newfoundland as "the Old Hag." According to Hufford, the Old Hag is "an experience with stable contents which is widespread, dramatic, realistic, and bizarre," and elements of the phenomenon cannot be fully explained either by psychology or culture. His works have explored the connection between the Old Hag and parapsychology in what he labels the "experience-centered approach" to hauntings.[19][20]

Treatment starts with patient education about sleep stages and about the muscle atonia that is typically associated with REM sleep. It is recommended that patients be evaluated for narcolepsy if symptoms persist.[21]

Many perceptions associated with sleep paralysis (visceral buzzing, loud sounds, excited mental state,[22] presences, and the paralysis itself) also constitute a common phase in the early progression of episodes referred to as out of body experiences.[23] Mental focus varies between the two conditions; paralysis sufferers tend to fixate on reestablishing operation of the body, whereas subjects of out-of-body episodes are more occupied by perceived non-equivalence with the body.

The original definition of sleep paralysis was codified by Dr. Samuel Johnson in his A Dictionary of the English Language as "nightmare," a term that evolved into our modern definition. Such sleep paralysis was widely considered to be the work of demons and more specifically incubi, which were thought to sit on the chests of sleepers. In Old English the name for these beings was mare or mære (from a proto-Germanic *marōn, cf. Old Norse mara), hence comes the mare part in nightmare. The word might be etymologically cognate to Hellenic Marōn (in the Odyssey) and Sanskrit Māra.

In Swedish folklore, sleep paralysis is caused by a Mare, a supernatural creature related to the werewolf. The Mare is a damned woman, who is cursed and her body is carried mysteriously during sleep and without her noticing. In this state, she visits villagers to sit on their rib cages while they are asleep, causing them to experience nightmares. The Swedish film Marianne examines the folklore surrounding sleep paralysis.[24]

Folk belief in Newfoundland, South Carolina and Georgia describe the negative figure of the Hag who leaves her physical body at night, and sits on the chest of her victim. The victim usually wakes with a feeling of terror, has difficulty breathing because of a perceived heavy invisible weight on his or her chest, and is unable to move i.e., experiences sleep paralysis. This nightmare experience is described as being "hag-ridden" in the Gullah lore. The "Old Hag" was a nightmare spirit in British and also Anglophone North American folklore.

In Fiji, the experience is interpreted as "kana tevoro" being 'eaten' or possessed by a demon. In many cases the 'demon' can be the spirit of a recently dead relative who has come back for some unfinished business, or has come to communicate some important news to the living. Often persons sleeping near the afflicted person say "kania, kania" (eat! eat!) in an attempt to prolong the possession for a chance to converse with the dead relative or spirit and seek answers as to why he/she has come back. The person waking up from the experience is often asked to immediately curse or chase the spirit of the dead relative, which sometimes involves literally speaking to the spirit telling him/her to go away or using expletives.[citation needed]

In Nigeria, "ISP appears to be far more common and recurrent among people of African descent than among whites or Nigerian Africans",[6] and is often referred to within African communities as "the Devil on your back."[25][26][27]

In Turkey, and in many Islamic beliefs,[citation needed] Sleep Paralysis is called Karabasan, and is similar other stories of demonic visitation during sleep. A demon, commonly known as a djinn (cin in Turkish), comes to the victim's room, holds him or her down hard enough not to allow any kind of movement, and starts to strangle the person. Many people even say that they hear the voice of the djinn or of Satan. To get rid of the demonic creature, one needs to pray to God (Allah in Islamic beliefs) with certain lines from the Qur'an. If one does not pray soon enough, it is said that the demonic creature will strangle the person to death. Some women actually believe the creature raped them during the visitation due to waking up with pain around the area of their genitalia and with a headache.

Various forms of magic and spiritual possession were also advanced as causes. In nineteenth century Europe, the vagaries of diet were thought to be responsible. For example, in Charles Dickens's A Christmas Carol, Ebenezer Scrooge attributes the ghost he sees to "... an undigested bit of beef, a blot of mustard, a crumb of cheese, a fragment of an underdone potato..." In a similar vein, the Household Cyclopedia (1881) offers the following advice about nightmares:

"Great attention is to be paid to regularity and choice of diet. Intemperance of every kind is hurtful, but nothing is more productive of this disease than drinking bad wine. Of eatables those which are most prejudicial are all fat and greasy meats and pastry... Moderate exercise contributes in a superior degree to promote the digestion of food and prevent flatulence; those, however, who are necessarily confined to a sedentary occupation, should particularly avoid applying themselves to study or bodily labor immediately after eating... Going to bed before the usual hour is a frequent cause of night-mare, as it either occasions the patient to sleep too long or to lie long awake in the night. Passing a whole night or part of a night without rest likewise gives birth to the disease, as it occasions the patient, on the succeeding night, to sleep too soundly. Indulging in sleep too late in the morning, is an almost certain method to bring on the paroxysm, and the more frequently it returns, the greater strength it acquires; the propensity to sleep at this time is almost irresistible."[28]

Complete references to many cultures are given in the References section