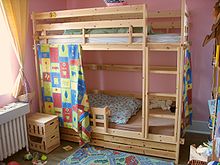 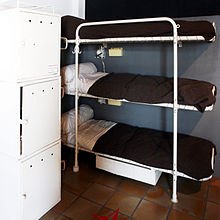 A bunk bed is a type of bed in which one bed frame is stacked on top of another. The nature of bunk beds allows two people to sleep in the same room while maximizing available floor space. This leads to them being used in places with limited floor space, such as on ships and in army garrisons or in places that wish to maximize bedspace such as: dormitories, summer camp cabins, hostels, children's rooms, prison cells, or university residence halls.

Bunk beds are normally supported by four poles or pillars, one at each corner of the bed. To get to the second bunk a ladder is used. The top bed is normally surrounded by a railing to prevent the sleeper from falling out, and some models also have a privacy curtain for the lower bunk. Because of the need for a ladder and the height of the bed, the top bunk of a bunkbed is not recommended for children under six years of age.[1] Ceiling fans are also not recommended in rooms with bunk beds.[citation needed]

The most common type is the standard bunk bed which has two same size mattresses stacked one directly over the other. A twin over full bunk bed is arranged as a standard except that the bottom mattress will be a full size and the upper will be a twin size. A futon bunk is also arranged like a standard bunk except the lower bunk will be a Western-style futon couch which converts into a bed rather than a standard mattress. Futon bunks can be used to save space in small apartments or rooms, because the lower bed converts to a couch for use during the daytime. In an L-shape bunk the bottom bed is oriented at a right angle to the top bed such that when viewed from above the beds form an L. This also creates a small alcove where a desk or bookshelf can be placed.

A loft bed denotes a bunk bed that has only the top bunk, creating an open space underneath that can be occupied by a chest, drawers, or even a work area.[2][3] This makes loft beds an efficient use of small spaces by utilizing the entire vertical area that would otherwise be left unused. Some loft beds even have stowable/trundle beds while retaining the capability to contain workstations and drawers. Some loft beds are more expensive than bunk beds due to built-in storage capacity and other features.

A triple Wretham loft bed is an arrangement involving a total of three bunks. These bunks are a combination of bed types, where a loft bed is perpendicularly attached to a bunk bed to form an L-shape.

A triple Wretham loft bed + a Cougan is an arrangement involving a total of FOUR bunks. Usually the bunks are stacked on top of each other, sometimes roof modifications are required in a home to accommodate these.

Bunk beds range in price from economy models made with metal, solid plastic or softwood frames in which the mattresses are supported by metal wire and spring suspension to expensive models made from hardwood which are outfitted with drawers, shelves, and other accessories. Some people make DIY bunk beds from wooden planks and fasteners, either from scratch or using plans or designs that they have acquired.

The top bunk of a bunk bed may be lined with safety rails to keep the user from rolling out and falling to the floor while sleeping. Beds that do not include rails may be retrofitted to include them.[4][5]