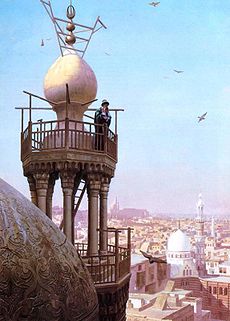 Jean-Léon Gérôme. A Muezzin Calling from the Top of a Minaret the Faithful to Prayer (1879) 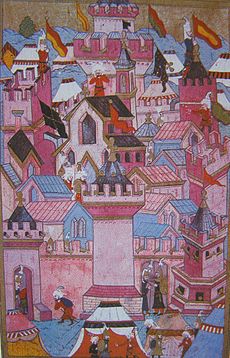 An Ottoman Muezzin proclaims the Adhan after their victory during the Siege of Esztergom (1543).

/muːˈɛzɪn/; Turkish: müezzin from Arabic: مؤذن‎, mu’aḏḏin), or muzim, is the chosen person at a mosque who leads the call to prayer (adhan) at Friday services and the five daily times for prayer (salat, Turkish namaz) from one of the mosque's minarets; in most modern mosques, electronic amplification aids the muezzin in his task.

The professional muezzin is chosen for his good character, voice and skills to serve at the mosque; he however is not considered a cleric, but in a position rather comparable to a Christian sexton. When calling to prayer, the muezzin faces the Qiblah, the direction of the Ka'bah in Mecca, while he cries out the adhan. During the worship service, the muezzin in some mosques stands on a special platform (called the müezzin mahfili in Turkish), which is opposite the imam's minbar and gives responses during the imam's sermon, the khutbah.

The institution of the muezzin has existed since the time of Muhammad. The first muezzin was Bilal ibn Ribah, who walked the streets to call the believers to come to prayer. Although many of the customs associated with the muezzin remained undecided at the time of Muhammad's death, including which direction one should choose for the calling, where it should be performed, and the use of trumpets, flags or lamps, all of these are elements of the muezzin's role during the adhan.

After minarets became customary at mosques, the office of muezzin in cities was sometimes given to a blind man, who could not see down into the inner courtyards of the citizen's houses and thus could not violate privacy.

The call of the muezzin is also considered an art form, reflected in the melodious chanting of the adhan. A recently released documentary, "Muezzin", by Austrian filmmaker Sebastian Brameshuber, shows Turkish muezzins competing in an annual nationwide call to prayer competition.

However, this may be about to change: The Minister of Religious Foundations in Egypt wishes to introduce a centralized muezzin by the end of the year. A single muezzin voice will be broadcast live on a radio channel simultaneously to all government mosques.