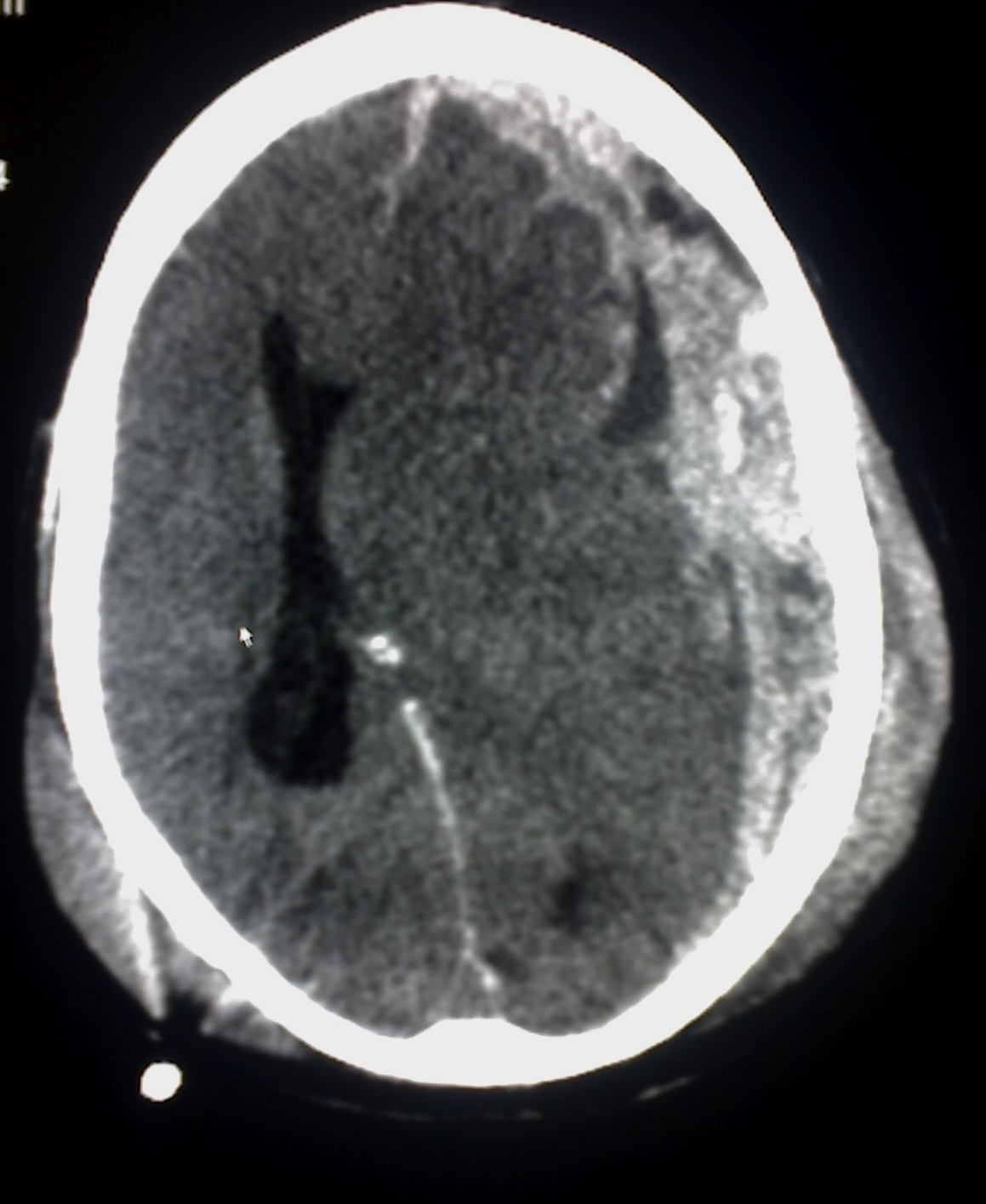 Caption =
DiseasesDB = 12614
ICD10 = ICD10|I|61|0|i|60, ICD10|S|06|5|s|00
ICD9 = ICD9|852.2 - traumatic; ICD9|432.1 - nontraumatic
ICDO =
OMIM =
MedlinePlus = 000713
eMedicineSubj = neuro
eMedicineTopic = 575
MeshID = D006408
A subdural (Subdural haematoma) (SDH) is a form of in which gathers between the dura (the outer protective covering of the ) and the arachnoid (the middle layer of the ). Unlike in , which are usually caused by tears in arteries, subdural bleeding usually results from tears in veins that cross the . This bleeding often separates the dura and the arachnoid layers. Subdural hemorrhages may cause an increase in (ICP), which can cause compression of and damage to delicate brain tissue. Acute subdural hematoma (ASDH) has a high mortality rate and is a severe . "

=Causes= Subdural hematomas are most often caused by , when fast changing velocities within the may stretch and tear small bridging s. Subdural hematomas due to head injury are described as traumatic. Much more common than s, subdural hemorrhages generally result from shearing injuries due to various rotational or linear forces.

Symptoms of subdural hemorrhage have a slower onset than those of s because the lower pressure veins bleed more slowly than arteries. Thus, signs and symptoms may show up within 24 hours but can be delayed as much as 2 weeks.

* A history of recent
* Loss of or fluctuating levels of consciousness
* Irritability
*
*
* (either constant or fluctuating)
*
*
*
* Weakness or
* or vomiting
* Personality changes
* Inability to speak or slurred speech
* , or difficulty walking
* Altered breathing patterns
* Blurred Vision
* , or abnormal movement of the eyes.

Most of the time, subdural hematomas occur around the tops and sides of the frontal and s. They also occur in the posterior , and near the and . Unlike s, which cannot expand past the sutures of the skull, subdural hematomas can expand along the inside of the skull, creating a convex shape that follows the curve of the brain, stopping only at the s like the tentorium and falx cerebri.

On a , subdural hematomas are crescent-shaped, with a concave surface away from the skull. Subdural blood can also be seen as a layering density along the . This can be a chronic, stable process, since the feeding system is low-pressure. In such cases, subtle signs of bleeding such as effacement of sulci or medial displacement of the junction between and may be apparent. A chronic bleed can be the same density as brain tissue (called to brain), meaning that it will show up on CT scan as the same shade as brain tissue, potentially obscuring the finding.

Subdural hematomas are divided into acute, subacute, and chronic, depending on their speed of onset. Acute subdural hematomas that are due to trauma are the most lethal of all head injuries and have a high if they are not rapidly treated with surgical decompression.

Acute bleeds develop after high speed acceleration or deceleration injuries and are increasingly severe with larger hematomas. They are most severe if associated with s. Though much faster than chronic subdural bleeds, acute subdural bleeding is usually venous and therefore slower than the usually arterial bleeding of an . Acute subdural bleeds have a high mortality rate, higher even than epidural hematomas and diffuse brain injuries, because the velocities necessary to cause them cause other severe injuries as well. [Vinas F.C. and Pilitsis J. 2006. [http://www.emedicine.com/med/topic2888.htm Penetrating Head Trauma] . Emedicine.com.] The mortality rate associated with acute subdural hematoma is around 60 to 80% [Dawodu S. 2004. [http://www.emedicine.com/pmr/topic212.htm "Traumatic brain injury: Definition, epidemiology, pathophysiology"] Emedicine.com. Retrieved on , .]

Chronic subdural bleeds develop over the period of days to weeks, often after minor head trauma, though such a cause is not identifiable in 50% of patients.

Collected blood from the subdural bleed may draw in water due to , causing it to expand, which may compress brain tissue and cause new bleeds by tearing other blood vessels. The collected blood may even develop its own membrane. [McCaffrey P. 2001. [http://www.csuchico.edu/~pmccaff/syllabi/SPPA336/336unit11.html "The neuroscience on the web series: CMSD 336 neuropathologies of language and cognition."] California State University, Chico. Retrieved on , . ]

In some subdural bleeds, the of the is torn, and (CSF) and blood both expand in the , increasing pressure.

Substances that cause vasoconstriction may be released from the collected material in a subdural hematoma, causing further under the site by restricting blood flow to the brain. When the brain is denied adequate blood flow, a known as the is unleashed, and may ultimately lead to brain cell death.

The body gradually reabsorbs the clot and replaces it with granulation tissue.

It is important that a patient receive medical assessment, including a complete neurological examination, after any head trauma. A or will usually detect significant subdural hematomas.

Treatment of a subdural hematoma depends on its size and rate of growth. Small subdural hematomas can be managed by careful monitoring until the body heals itself. Large or symptomatic hematomas require a , the surgical opening of the . A surgeon then opens the , removes the with suction or irrigation, and identifies and controls sites of . Postoperative complications include increased , brain , new or recurrent , , and . The artery must be repaired.