The dura mater /ˈdjʊərə ˈmeɪtər/, or dura, is the outermost of the three layers of the meninges surrounding the brain and spinal cord. It is derived from Mesoderm. The other two meningeal layers are the pia mater and the arachnoid mater. The dura surrounds the brain and the spinal cord and is responsible for keeping in the cerebrospinal fluid. The name "dura mater" is derived from the Latin "hard mother" or "tough mother",[1] (translation of Arabic umm al-dimagh as-safiqa[2]) and is also referred to by the term "pachymeninx" (plural "pachymeninges").[3] The dura has been described as "tough and inflexible" and "leather-like".[3]

The dura mater has several functions and layers. The dura mater is a sac (aka thecal sac) that envelops the arachnoid mater. It surrounds and supports the dural sinuses (also called dural venous sinuses, cerebral sinuses, or cranial sinuses) and carries blood from the brain toward the heart.

The dura mater has two layers, or lamellae: The superficial layer, which serves as the skull's inner periosteum, called the endocranium; and a deep layer, the actual dura mater. 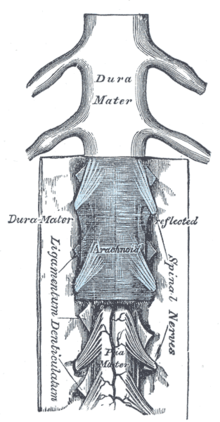 The dura separates into two layers at dural reflections (also known as dural folds), places where the inner dural layer is reflected as sheet-like protrusions into the cranial cavity. There are two main dural reflections:

The two layers of dura mater run together throughout most of the skull. Where they separate, the gap between them is called a dural venous sinus. These sinuses drain blood and cerebrospinal fluid from the brain and empty into the internal jugular vein.

They drain via the arachnoid villi, which are outgrowths of the arachnoid mater (the middle meningeal layer) that extend into the venous sinuses. These villi act as one-way valves.

In 2011, Scali et al., discovered a connection of soft tissue from the rectus capitis posterior major to the cervical dura mater. Various clinical manifestations may be linked to this anatomical relationship such as headaches, trigeminal neuralgia and other symptoms that involved the cervical dura (Spine 2011).[6] The rectus capitis posterior minor has a similar attachment as described by Hack et al. in 1995.

The dura-muscular, dura-ligamentous connections in the upper cervical spine and occipital areas may provide anatomic and physiologic answers to the cause of the cervicogenic headache. This proposal would further explain manipulation's efficacy in the treatment of cervicogenic headache.[7]

The middle meningeal artery supplies most of the blood for the dura mater, though the meningeal branches of the posterior and anterior ethmoidal artery also contribute.

The American Red Cross and some other agencies accepting blood donations consider dura mater transplants, along with receipt of pituitary-derived growth hormone, a risk factor due to concerns about Creutzfeldt-Jakob disease.[9]

Dural ectasia is the enlargement of the dura and is common in connective tissue disorders, such as Marfan Syndrome and Ehlers-Danlos Syndrome.

Spontaneous Cerebrospinal Fluid Leak is the fluid and pressure loss of spinal fluid due to holes in the dura mater.