The choroid plexus (from Greek khorion "membrane enclosing the fetus, afterbirth"; "plexus": Mod.L., lit. "braid, network") is a structure in the ventricles of the brain where cerebrospinal fluid (CSF) is produced. The choroid plexus consists of modified ependymal cells. 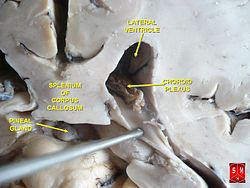 There is also choroid plexus in the fourth ventricle, in the section closest to the bottom half of the cerebellum.

Structure of the choroid plexus

The choroid plexus (CP) consists of many capillaries, separated from the ventricles by choroid epithelial cells. Liquid filters through these cells from blood to become cerebrospinal fluid. There is also much active transport of substances into, and out of, the CSF as it is made.

There are four choroid plexi in the brain, one in each of the ventricles. The CP consist of a layer of cuboidal epithelial cells surrounding a core of capillaries and loose connective tissue. The CP epithelial layer is continuous with the ependymal cell layer that lines the ventricles, but unlike the ependyma the CP epithelial layer has tight junctions in between the cells on the side facing the ventricle (apical surface). These tight junctions prevent the majority of substances from crossing the cell layer into the CSF; thus the CP acts as a blood-CSF barrier. The CP folds into many villi around each capillary, creating frond-like processes that project into the ventricles. The villi, along with a brush border of microvilli, greatly increases the surface area of the CP. CSF is formed as plasma is filtered from the blood through the epithelial cells. CP epithelial cells actively transport sodium, chloride and bicarbonate ions into the ventricles and water follows the resulting osmotic gradient.

In addition to CSF production, the CP act as a filtration system, removing metabolic waste, foreign substances, and excess neurotransmitters from the CSF. In this way the CP have a very important role in helping to maintain the delicate extracellular environment required by the brain to function optimally.

During embryological development, some fetuses may form choroid plexus cysts. These fluid-filled cysts can be detected by a level II ultrasound (18–20 weeks gestation). The finding is relatively common, with a prevalence of ~1%. Choroid plexus cysts (CPC) can be an isolated finding, which confers a 1-12% (variable based on population studied) risk of fetal aneuploidy. The risk of aneuploidy increases to 10.5-12% if other risk factors or ultrasound findings are noted. The idioma size, bilaterality, disappearance/progression of the CPC, and position of the CPC do not have any effect on the risk of aneuploidy. 44-50% of trisomy 18 cases will present with CPC, and 1.4% of trisomy 21 (Down syndrome) cases will present with CPC. ~75% of abnormal karyotypes (obtained by chorionic villus sampling or amniocentesis) associated with CPCs are trisomy 18, while the remainder are trisomy 21. [2]

CPCs typically disappear later during pregnancy, and are considered soft markers. They are likely harmless, and studies have shown that they have no effect on infant and early childhood development.[3]

Strazielle and Ghersi-Egea. "Choroid Plexus in the Central Nervous System: BIology and Physiopathology". 2000. Jouranal of Neuropathology and Experimental Neurology 59(7): 561-574.