The superior oblique muscle, or obliquus oculi superior, is a fusiform muscle originating in the upper, medial side of the orbit (i.e. from beside the nose) which abducts, depresses and internally rotates the eye. It is the only extraocular muscle innervated by the trochlear nerve (the fourth cranial nerve).

The extraocular muscles rotate the eyeball around vertical, horizontal and antero-posterior axes. Extraocular muscles other than the medial rectus and lateral rectus have more than one action due to the angle they make with the optical axis of the eye while inserting into the eyeball. The superior and inferior oblique muscles make an angle of 51 degrees with the optical axis. The primary (main) action of the superior oblique muscle is intorsion (internal rotation), the secondary action is depression (primarily in the adducted position) and the tertiary action is abduction (lateral rotation). The actions are remembered by the mnemonic 'SO-LID' [1]

The depressing action of superior oblique (making the eye look down towards the mouth) is most effective when the eye is in an adducted position. This is because as the eye is abducted (looks laterally), the contribution made by superior oblique to depression of the eye decreases, as the inferior rectus muscle causes this movement more directly and powerfully. The main muscle for abduction is the lateral rectus, so although superior oblique contributes to a downwards and lateral eye movement, testing this motion would not be specific enough as inferior and lateral recti muscles would also be tested. Therefore, during neurological examinations, the superior oblique is tested by having the patient look inwards and downwards, testing only the depressing action of the muscle. This is a source of confusion on the subject as although clinical testing asks the patient to adduct and depress the eye, anatomically the muscle depresses and abducts it.

The great importance of intorsion and extorsion produced by the two oblique muscles can only be understood when it is considered with regards to the other muscle actions present. The two obliques prevent the eye from rotating about its long axis (retina to pupil) when the superior and inferior rectus muscles contract. This is because the orbit does not face directly forwards- the centre-line of the orbit is a little over 20 degrees out from the mid-line. But because the eyes do face forwards, when acting alone, as well as making the eye look up, superior rectus causes it to rotate slightly about the long axis, so the top of the eye moves medially (intorsion). Similarly, in addition to making the eye look down, inferior rectus would cause the eye to rotate about the long axis so the top of the eye moves slightly laterally (extorsion), if acting alone. Clearly this is undesirable as our vision would rotate when we looked up and down. For this reason, these two rectus muscles work in conjunction with the two obliques. When acting alone, superior oblique causes intorsion, inferior oblique, extorsion. Hence, when inferior rectus contracts so we look down, superior oblique also contracts to prevent extorsion of the eye, and when superior rectus contracts so we look up, inferior oblique contracts to prevent intorsion, thus the undesired rotatory actions of the inferior and superior recti about the long axis of the eye are cancelled out. This keeps our vision horizontally level, irrespective of eye position in the orbit.[2] 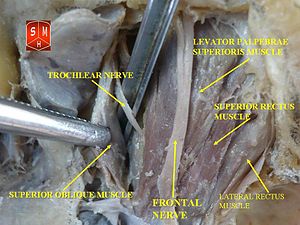 It arises immediately above the margin of the optic foramen, above and medial to the origin of the superior rectus, and, passing forward, ends in a rounded tendon, which plays in a fibrocartilaginous ring or pulley attached to the trochlear fovea of the frontal bone.

The contiguous surfaces of the tendon and ring are lined by a delicate mucous sheath, and enclosed in a thin fibrous investment.

The tendon is reflected backward, lateralward, and downward beneath the superior rectus to the lateral part of the bulb of the eye, and is inserted onto the scleral surface, behind the equator of the eyeball, the insertion of the muscle lying between the superior rectus and Rectus lateralis.

Superior oblique palsy is a common complication of closed head trauma. Restriction of superior oblique movement due to an inelastic tendon is found in Brown syndrome, leading to difficulty elevating the eye in the adducted position.

Superior oblique myokymia is an uncommon neurological condition caused by vascular compression of the trochlear nerve resulting in repeated, brief, involuntary episodes of movement of the eye.