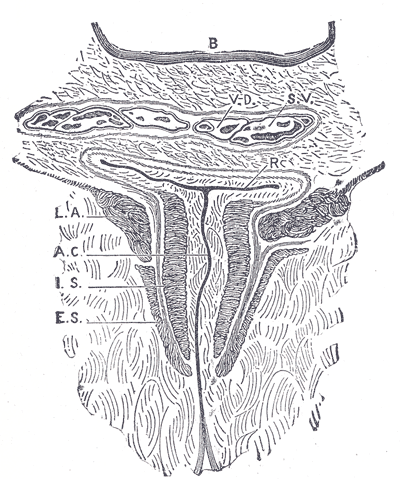 It measures about 8 to 10 cm in length, from its anterior to its posterior extremity, and is about 2.5 cm broad opposite the anus.

It consists of two strata, superficial and deep.

* The "superficial", constituting the main portion of the muscle, arises from a narrow tendinous band, the , which stretches from the tip of the to the posterior margin of the anus; it forms two flattened planes of muscular tissue, which encircle the anus and meet in front to be inserted into the , joining with the , the , and the .

* The "deeper" portion forms a complete sphincter to the . Its fibers surround the canal, closely applied to the , and in front blend with the other muscles at the central point of the .

In a considerable proportion of cases the fibers in front of the anus, and are continuous with the .

The upper edge of the muscle is ill-defined, since fibers are given off from it to join the .

The action of this muscle is peculiar.

(1) It is, like other muscles, always in a state of tonic contraction, and having no antagonistic muscle it keeps the and orifice closed.

(3) Taking its fixed point at the , it helps to fix the central point of the , so that the Bulbocavernosus may act from this fixed point.