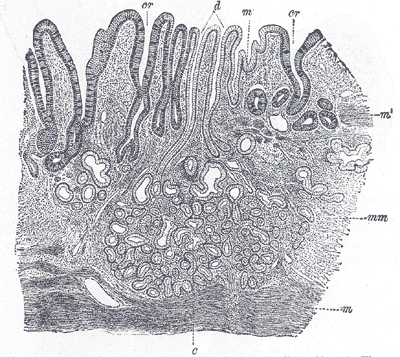 Caption2 = Section of mucous membrane of human stomach, near the cardiac orifice. X 45. c. Cardiac glands. d. Their ducts. cr. Gland similar to the intestinal glands, with goblet cells. mm. Mucous membrane. m. Muscularis mucosæ. m’. Muscular tissue within the mucous membrane.
Precursor =
System =
Artery =
Vein =
Nerve =
Lymph =
MeshName =
MeshNumber =
DorlandsPre = t_22
DorlandsSuf = 12831946
The gastric mucosa is the layer of the which contains the and the . In men it is about 1 mm thick and its surface is smooth, soft, and velvety. It consists of epithelium, lamina propria, and the muscularis mucosae.

In its fresh state, it is of a pinkish tinge at the end and of a red or reddish-brown color over the rest of its surface. In it is of a brighter hue, the vascular redness being more marked.

It is thin at the extremity, but thicker toward the pylorus. During the contracted state of the organ it is thrown into numerous plaits or , which, for the most part, have a longitudinal direction, and are most marked toward the pyloric end of the stomach, and along the . These folds are entirely obliterated when the organ becomes .

When examined with a lens, the inner surface of the mucous membrane presents a peculiar honeycomb appearance from being covered with funnel-like depressions or foveolae of a polygonal or hexagonal form, which vary from 0.12 to 0.25 mm. in diameter. These are the ducts of the , and at the bottom of each may be seen one or more minute orifices, the openings of the gland tubes. Gastric glands are simple or branched tubular glands that emerge on the deeper part of the gastric foveola, inside the gastric areas and outlined by the folds of the mucosa.

There are three types of glands: cardiac glands (in the proximal part of the stomach), oxyntic glands (the dominating type of gland), and pyloric glands.The cardiac glands mainly contain mucus producing cells.The bottom part of the oxyntic glands is dominated by zymogen (chief) cells that produce pepsinogen (an inactive precursor of the pepsin enzyme). Parietal cells, which secrete hydrochloric acid are scattered in the glands, with most of them in the middle part. The upper part of the glands consist of mucous neck cells; in this part the dividing cells are seen. The pyloric glands contain mucus-secreting cells.Several types of endocrine cells are found in all regions of the gastric mucosa. In the pyloric glands contain gastrin producing cells (G cells); this hormone stimulates acid production from the parietal cells. ECL (enterochromaffine-like) cells, found in the oxyntic glands release histamine, which also is a powerful stimulant of the acid secretion.The A cells produce , which mobilizes the hepatic , and the enterochromaffin cells that produce serotonin, which stimulates the contraction of the smooth muscles.