This article is about the human jawbone. For the other mandibles, see Mandible.

The mandible [pronunciation] (from Latin mandibula, "jawbone") or inferior maxillary bone forms the lower jaw and holds the lower teeth in place. The term "mandible" also refers to both the upper and lower sections of the beaks of birds; in this case the "lower mandible" corresponds to the mandible of humans, while the "upper mandible" is functionally equivalent to the human maxilla but mainly consists of the premaxillary bones. Conversely, in bony fish for example, the lower jaw may be termed "lower maxilla".

The mandible consists of: 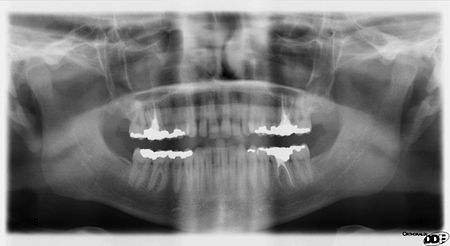 The mandible articulates with the two temporal bones at the temporomandibular joints. 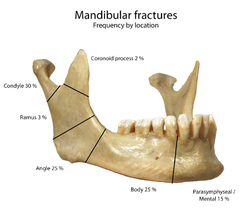 The mandible may be dislocated anteriorly (to the front) and inferiorly (downwards) but very rarely posteriorly (backwards).