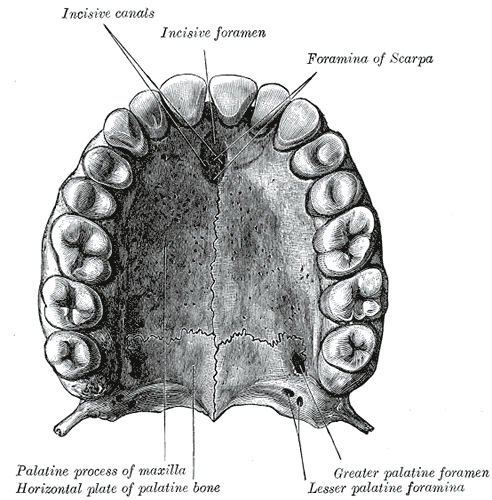 Caption = The and . (Palatine process labeled at bottom left.) 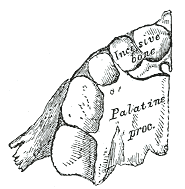 Caption2 = Inferior surface of at birth.
System =
Precursor =
MeshName =
MeshNumber =
DorlandsPre = p_34
DorlandsSuf = 12667562
The palatine process of the (palatal process), thick and strong, is horizontal and projects medialward from the nasal surface of the bone.

It forms a considerable part of the floor of the nose and the roof of the mouth and is much thicker in front than behind.

Its "inferior surface" is concave, rough and uneven, and forms, with the palatine process of the opposite bone, the anterior three-fourths of the .

It is perforated by numerous foramina for the passage of the nutrient vessels; is channelled at the back part of its lateral border by a groove, sometimes a canal, for the transmission of the and the from the ; and presents little depressions for the lodgement of the .

When the two maxillae are articulated, a funnel-shaped opening, the , is seen in the middle line, immediately behind the .

In this opening the orifices of two lateral canals are visible; they are named the or ; through each of them passes the terminal branch of the and the .

Occasionally two additional canals are present in the middle line; they are termed the , and when present transmit the , the left passing through the anterior, and the right through the .

On the under surface of the palatine process, a delicate linear suture, well seen in young skulls, may sometimes be noticed extending lateralward and forward on either side from the incisive foramen to the interval between the lateral incisor and the .

The small part in front of this suture constitutes the premaxilla ("os incisivum"), which in most vertebrates forms an independent bone; it includes the whole thickness of the , the corresponding part of the floor of the nose and the anterior nasal spine, and contains the sockets of the incisor teeth.

The "upper surface" of the palatine process is concave from side to side, smooth, and forms the greater part of the floor of the nasal cavity. It presents, close to its medial margin, the upper orifice of the incisive canal.

The "lateral border" of the process is incorporated with the rest of the bone.

The "medial border" is thicker in front than behind, and is raised above into a ridge, the , which, with the corresponding ridge of the opposite bone, forms a groove for the reception of the . The front part of this ridge rises to a considerable height, and is named the ; it is prolonged forward into a sharp process, which forms, together with a similar process of the opposite bone, the .

The "posterior border" is serrated for articulation with the horizontal part of the .