Caption = Anatomy of the anus and rectum 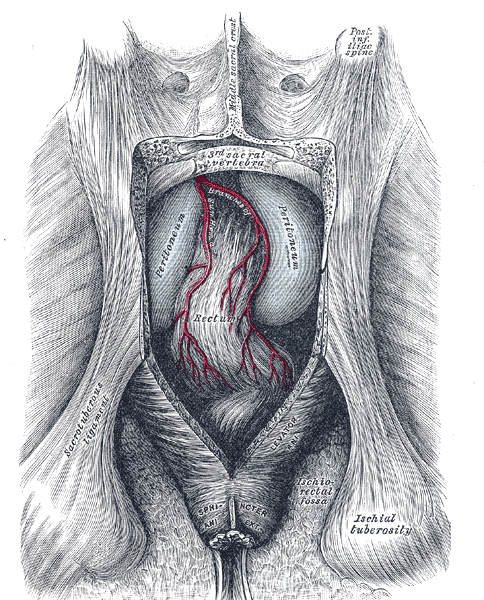 Caption2 = The posterior aspect of the rectum exposed by removing the lower part of the sacrum and the coccyx.
Precursor =
Artery = (1st two-thirds of rectum), (last third of rectum)
Vein = ,
Nerve = , [GeorgiaPhysiology|6/6ch2/s6ch2_30]
Lymph = , ,
MeshName = Rectum
MeshNumber = A03.556.124.526.767
DorlandsPre = r_05
DorlandsSuf = 12697487
The rectum (from the Latin "rectum intestinum", meaning "straight intestine") is the final straight portion of the in some s, and the gut in others, terminating in the . The human rectum is about 12 cm long. At its commencement its caliber is similar to that of the , but near its termination it is dilated, forming the .

The rectum intestinum acts as a temporary storage facility for feces. As the rectal walls expand due to the materials filling it from within, stretch receptors from the located in the rectal walls stimulate the desire to defecate. If the urge is not acted upon, the material in the rectum is often returned to the colon where more water is absorbed. If defecation is delayed for a prolonged period, and hardened feces results.

For the diagnosis of certain s, a may be done.

Suppositories may be inserted into the rectum as a for .

The endoscopic procedures and are performed to diagnose diseases such as .

Many pediatricians recommend that parents take and 's temperature in the rectum for two reasons:
* (1) Rectal temperature is the closest to core body temperature and in children that young, accuracy is critical.
* (2) Younger children are unable to cooperate when having their temperature taken by mouth (oral) which is recommended for children, ages 6 and above and for adults.

In recent years, the introduction of ear (tympanic) thermometers and changing attitudes on and have led some parents and doctors to discontinue taking rectal temperatures.

Due to the proximity of the anterior wall of the rectum to the in females or to the in males and the shared nerves thereof, rectal or penetration can result in . For further information on this aspect, see .