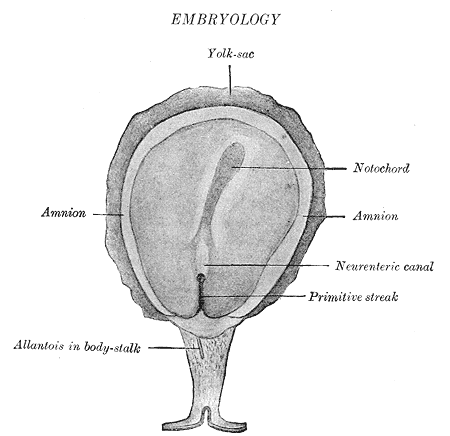 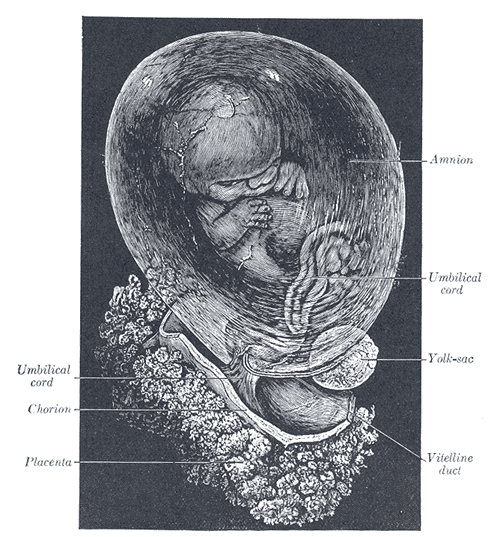 Caption2 = Human fetus, enclosed in the amnion.
System =
MeshName = Amnion
MeshNumber = A10.615.284.277
:"For the alien race in 's , see ."The amnion is a membranous sac that surrounds and protects the . It is developed in s, s, and s, which are hence called “Amniota”; but not in and , which are consequently termed “Anamniota”. The primary function of this is the protection of the embryo for its future development.

In the human embryo the earliest stages of the formation of the amnion have not been observed; in the youngest embryo which has been studied the amnion was already present as a closed sac, and appears in the inner cell-mass as a cavity. This cavity is roofed in by a single stratum of flattened, ectodermal cells, the amniotic ectoderm, and its floor consists of the prismatic ectoderm of the embryonic disk—the continuity between the roof and floor being established at the margin of the embryonic disk. Outside the amniotic ectoderm is a thin layer of , which is continuous with that of the and is connected by the body-stalk with the mesodermal lining of the chorion.

When first formed the amnion is in contact with the body of the embryo, but about the fourth or fifth week fluid (liquor amnii) begins to accumulate within it. This fluid increases in quantity and causes the amnion to expand and ultimately to adhere to the inner surface of the , so that the extra-embryonic part of the is obliterated. The liquor amnii increases in quantity up to the sixth or seventh month of pregnancy, after which it diminishes somewhat; at the end of pregnancy it amounts to about 1 liter.

The amniotic fluid allows the free movements of the fetus during the later stages of pregnancy, and also protects it by diminishing the risk of injury from without. It contains less than two percent solids, consisting of urea and other extractives, inorganic salts, a small amount of , and frequently a trace of . That some of the liquor amnii is swallowed by the fetus is proved by the fact that epidermal debris and hairs have been found among the contents of the fetal alimentary canal.

In reptiles, birds, and many mammals

In reptiles, birds, and many mammals the amnion is developed in the following manner

At the point of constriction where the primitive digestive tube of the embryo joins the a reflection or folding upward of the somatopleure takes place.

This, the amniotic fold, first makes its appearance at the cephalic extremity, and subsequently at the caudal end and sides of the embryo, and gradually rising more and more, its different parts meet and fuse over the dorsal aspect of the embryo, and enclose a cavity, the .

After the fusion of the edges of the amniotic fold, the two layers of the fold become completely separated, the inner forming the amnion, the outer the false amnion or serosa.

The space between the amnion and the serosa constitutes the extra-embryonic celom, and for a time communicates with the embryonic celom. The Amnion then is transported across the mesoderm to relieve further protection from such harmful chemicals as, zytoisn, poitan and the most dangerous of all, the exploatan.