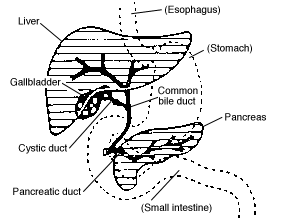 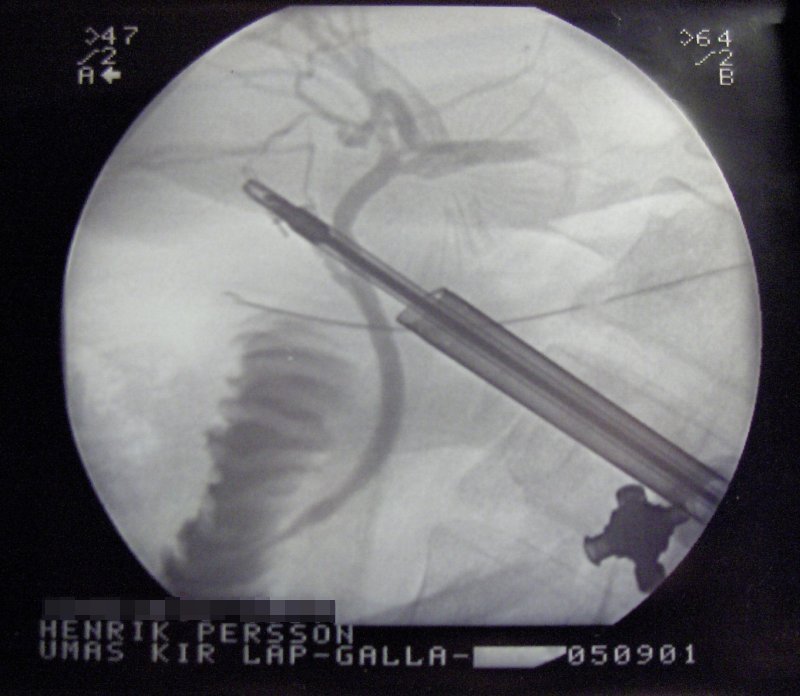 Caption2 = An intraoperative cholangiogram, which is an X-Ray of the bile ducts during a laprascopic cholecystectomy
System =
Artery =
Vein =
Nerve =
Lymph =
MeshName =
MeshNumber =
DorlandsPre = d_29
DorlandsSuf = 12313926

A bile duct is any of a number of long tube-like structures that carry .

Bile, required for the of food, is excreted by the into passages that carry bile toward the , which joins with the (carrying bile to and from the ) to form the , which opens into the .

The biliary tree (see below) is the whole network of various sized ducts branching through the liver.

Blockage of the bile duct by a , gallstones, or scarring from injury prevents the bile from being transported to the intestine and the active ingredient in the bile () instead accumulates in the . This condition is called and the and become yellow from the bilirubin in the blood. This condition also causes severe itchiness from the bilirubin deposited in the tissues. In certain types of jaundice, the urine will be noticeably darker, and the stools will be much paler than usual. This is caused by the bilirubin all going to the bloodstream and being filtered into the urine by the kidneys, instead of some being lost in the stools through the ampulla of Vater.

is commonly caused by conditions such as , which causes blockage of the bile duct passing through the cancerous portion of the pancreas; , cancer of the bile ducts; blockage by a stone in patients with s; and from scarring after injury to the bile duct during gallbladder removal.