Paisley or Paisley pattern is a droplet-shaped vegetable motif of Indian, Pakistani and Persian origin. The pattern is sometimes called "Persian pickles" by American traditionalists, especially quiltmakers,[1] or "Welsh pears" in Welsh textiles as far back as 1888.[2]

Resembling a twisted teardrop, the kidney-shaped paisley is Iranian and Indian in origin, but its western name derives from the town of Paisley, in central Scotland.[3]

In Tamil the design is known as mankolam and has long been used in India. It resembles a mango and has sometimes been associated with Hinduism.[4][5]

In Persian the design is known as boteh jegheh and it has been used in Iran since the Sassanid Dynasty.

Some design scholars call the distinctive shape boteh and believe it is the convergence of a stylized floral spray and a cypress tree: a Zoroastrian symbol of life and eternity.[citation needed] A floral motif called buteh,[6] which originated in the Sassanid Dynasty (200–650 AD) and later in the Safavid Dynasty of Persia (from 1501 to 1736), was a major textile pattern in Iran during the Qajar Dynasty and Pahlavi Dynasty. In these periods, the pattern was used to decorate royal regalia, crowns, and court garments, as well as textiles used by the general population. According to Azerbaijani historians, the design comes from ancient times of Zoroastrianism as an expression of essence of that religion and it became subsequently a decor element which is widely used in Azerbaijani culture and architecture.[7]

The pattern is still popular in Iran and South and Central Asian countries. It is woven using gold or silver threads on silk or other high quality textiles for gifts, for weddings and special occasions. In Iran and Uzbekistan its use goes beyond clothing – paintings, jewelry, frescoes, curtains, tablecloths, quilts, carpets, garden landscaping, and pottery also sport the buta design. In Uzbekistan the most frequent item that can be found featuring the design is the traditional headdress doppi.[citation needed]

The modern French words for paisley are boteh and palme, the latter being a reference to the palm tree, which, along with the pine and the cypress, is one of the traditional botanical motifs thought to have influenced the shape of the paisley element as it is now known.[8][not in citation given]

In Punjab, this pattern is referred to as an "Ambi". Ambi is derived from the word Amb which means mango in Punjabi.[citation needed] 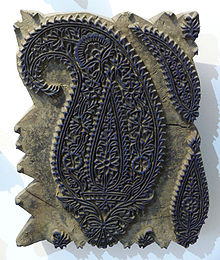 Imports from the East India Company in the first half of the 17th century made paisley and other Indian patterns popular, and the Company was unable to import enough to meet the demand. It was popular in the European Baltic states between 1700 and 1800 and was thought to be used as a protective charm to ward off evil demons. However, in modern culture, the youth of these countries have used it as a symbol of rebellion.

Local manufacturers in Marseilles began to mass-produce the patterns via early textile printing processes at 1640. England, circa 1670, and Holland, in 1678, soon followed. This, in turn, provided Europe's weavers with more competition than they could bear, and the production and import of printed paisley was forbidden in France by royal decree from 1686 to 1759. However, enforcement near the end of that period was lax, and France had its own printed textile manufacturing industry in place as early at 1746 in some locales. Paisley was not the only design produced by French textile printers; the demand for paisley which created the industry there also made possible production of native patterns such as toile de Jouy.[9]

In the 19th Century European production of paisley increased, particularly in the Scottish town from which the pattern takes its modern name. Soldiers returning from the colonies brought home cashmere wool shawls from India, and the East India Company imported more. The design was copied from the costly silk and wool Kashmir shawls and adapted first for use on handlooms, and, after 1820,[10] on Jacquard looms.

From roughly 1800 to 1850, the weavers of the town of Paisley in Renfrewshire, Scotland, became the foremost producers of these shawls. Unique additions to their handlooms and Jacquard looms permitted them to work in five colors when most weavers were producing paisley using only two.[10] The design became known as the Paisley pattern. By 1860, Paisley could produce shawls with fifteen colors, which was still only a quarter of the colors in the multi-color paisleys then still being imported from Kashmir.[10]

In addition to the loom-woven fabric, Paisley became a major site for the manufacture of printed cotton and wool in the 19th Century, according to the Scotland's Paisley Museum and Art Gallery.[11] The paisley pattern was being printed, rather than woven, onto other textiles, including cotton squares which were the precursors of the modern bandanna. Being able to purchase printed paisley rather than woven paisley brought the price of the costly pattern down and added to its popularity. The key places of manufacture for printed paisley were Britain and the Alsace region of France.[12] 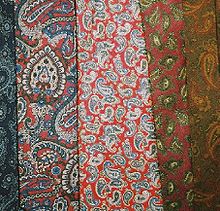 Authors Hal Rubenstein and Jim Mullen published a book in 1995 titled Paisley Goes With Nothing: A Man's Guide to Style, ISBN 0-385-47712-0. Paisley was particularly popular during the Summer of Love, heavily identified with psychedelic style and the interest in Indian spirituality and culture brought about by the pilgrimage of The Beatles to India in 1968. Also, Fender Guitars made a Pink Paisley version of their Telecaster guitar, by sticking paisley wallpaper onto the guitar bodies. The modern recording artist Prince paid tribute to the rock and roll history of paisley when he created the Paisley Park Records recording label and established Paisley Park Studios, both named after his 1985 song "Paisley Park".

Azerbaijan's bright uniform and colorful paisley trousers was one of the highlights of 2010 Winter Olympics.[13] According to many designers, paisley pants brought new trend to world's olympic fashion market.[14] Another publication noted that "Azerbaijan has no chance of winning at the Winter Olympics, however, the country had already left its mark on the games".[15][16]