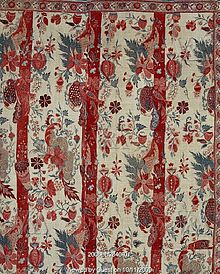 Chintz is glazed calico cloth printed with flowers and other patterns in different colours. Unglazed calico is called "cretonne". The word Calico is derived from the name of the Indian city Calicut (Kozhikkode in native Malayalam) to which it had a manufacturing association.

Chintz was originally a woodblock printed, painted or stained calico produced in India from 1600 to 1800 and popular for bed covers, quilts and draperies. Around 1600, Portuguese and Dutch traders were bringing examples of Indian chintz into Europe. These early fabrics were extremely expensive and rare. By 1680 more than a million pieces of chintz were being imported into England per year, and a similar quantity was going to France and Holland. With imported chintz becoming so popular with Europeans during the late 17th century, French and English mills grew concerned, as they could not make chintz. In 1686 the French declared a ban on all chintz imports. In 1720 England's Parliament enacted a law that forbade "the Use and Warings in Apparel of imported chintz, and also its use or Wear in or about any Bed, Chair, Cushion or other Household furniture".

Even though chintz was outlawed, there were loopholes in the legislation. The Court of Versailles was outside the law and fashionable young courtiers continued wearing chintz. In 1734, French naval officer, M. de Beaulieu, who was stationed in Pondicherry, India, sent home letters along with actual samples of chintz fabric during each stage of the process to a chemist friend detailing the dyeing process of cotton chintz. His letters and samples can be seen today in the Musee' Nationale d'Histore Naturelle in Paris.

In 1742, another Frenchman, Father Coeurdoux also supplied details of the chintz making process, while he was trying to convert the Indians to Catholicism. In 1759 the ban against chintz was lifted. By this time French and English mills were able to produce chintz.

Europeans at first produced reproductions of Indian designs, and later added original patterns. A well-known make was toile de Jouy, which was manufactured in Jouy, France, between 1700 and 1843.

Modern chintz usually consists of bright overall floral patterns printed on a light background but there are some popular patterns on black backgrounds as well.

In contemporary language the word "chintz" and "chintzy" can be used to refer to clothing or furnishings which are vulgar or florid in appearance.