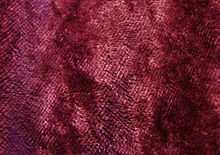 A cloth with a nap.

Starting around the 14th century, the word referred originally to the roughness of woven cloth before it was sheared.[1][2] When cloth, especially woollen cloth, is woven, the surface of the cloth is not smooth, and this roughness is the nap. Generally the cloth is then 'sheared' to create an even surface, and the nap is thus removed.

Since the 15th century, the term nap generally refers to a special pile given to the cloth.[2] The term pile refers to raised fibres that are there on purpose, rather than as a by product of producing the cloth.[3] In this case, the nap is woven into the cloth, often by weaving loops into the fabric, which can then be cut or left intact. Carpets, rugs, velvet, velour, and velveteen, are made by interlacing a secondary yarn through woven cloth, creating a nap or pile.

In the finishing process of manufacturing textiles, after the cloth is woven, it goes through processes such as washing, fulling, raising the nap, and trimming the nap. After the nap is trimmed, the fabric is considered finished. The raising process, which draws out the ends of the fibres, is done on both woollen and cotton fabric.[4] Flannelette is a cotton fabric that goes through this process. There are ways to 'raise the nap', most of which involve wire brushes such as raising cards. Originally, dried teasel pods were used[5] and were still preferred for use on woollen cloth for a long time.[4] Woollen fabrics, which must be damp when raising the nap, are then dried and stretched before the nap is trimmed or sheared. Cotton cloth goes straight to the shearing process, where the nap gets trimmed to ensure that all the raised fibres are the same length.[4]