Ramie (Boehmeria nivea) is a flowering plant in the nettle family Urticaceae, native to eastern Asia. It is a herbaceous perennial growing to 1–2.5 m tall;[1] the leaves are heart-shaped, 7–15 cm long and 6–12 cm broad, and white on the underside with dense small hairs—this gives it a silvery appearance; unlike nettles, the hairs do not sting. The true ramie or China Grass also called Chinese plant or white ramie is the Chinese cultivated plant. A second type, is known as green ramie or rhea and is believed to have originated in the Malay Peninsula. This type has smaller leaves which are green on the underside, and it appears to be better suited to tropical conditions.[1] 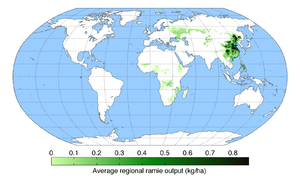 Ramie is one of the oldest fiber crops, having been used for at least six thousand years, and is principally used for fabric production. It is a bast fiber, and the part used is the bark (phloem) of the vegetative stalks. Ramie is normally harvested two to three times a year but under good growing conditions can be harvested up to six times per year.[2] Unlike other bast crops, ramie requires chemical processing to de-gum the fiber.

Harvesting is done just before or soon after the beginning of flowering. It is done at this time because at this stage there is a decline in plant growth and the maximum fiber content is achieved.[2] Stems are harvested by either cutting just above the lateral roots or else bending the stem. This will enable the core to be broken and the cortex can be stripped from the plant in situ.[2]

The extraction of the fiber occurs in three stages. First the cortex or bark is removed; this can be done by hand or by machine. This process is called de-cortication. Second the cortex is scraped to remove most of the outer bark, the parenchyma in the bast layer and some of the gums and pectins. Finally the residual cortex material is washed, dried, and de-gummed to extract the spinnable fiber.[2]

Ramie has been around for so long that it was even used in mummy cloths in Egypt during the period 5000–3300 BC and has been grown in China for many centuries. In the study of the "Lazarus" mummy, three types of textiles were found. The outermost cloth was heavy and coarsely woven; the innermost was the lightest and most tightly woven. The outer cloth appeared to be ramie (which Wiseman notes "contains non-fibrous material that is toxic to bacteria and fungi"—in other words, an ideal textile for mummymaking). Farmers in ancient China are also known to have used the fiber to weave clothing.

Ramie was used to produce an open weave fabric called mechera, used for shirts and dressing gowns suitable for warm climates. The French painter Raoul Dufy designed in the early 20th century patterns for prints on mechera used by the French shirtmaker Charvet.[3]

Brazil began production in the late 1930s with production peaking in 1971. Since then, production has steadily declined as a result of competition with alternative crops, such as soybeans and the important synthetic fibers.[1]

Ramie is one of the strongest natural fibers. It exhibits even greater strength when wet. Ramie fiber is known especially for its ability to hold shape, reduce wrinkling, and introduce a silky lustre to the fabric appearance. It is not as durable as other fibers, and so is usually used as a blend with other fibers such as cotton or wool. It is similar to flax in absorbency, density and microscopic appearance. However it will not dye as well as cotton. Because of its high molecular crystallinity, ramie is stiff and brittle and will break if folded repeatedly in the same place; it lacks resiliency and is low in elasticity and elongation potential.[4]

Despite its strength, ramie has had limited acceptance for textile use. The fiber's extraction and cleaning are expensive, chiefly because of the several steps—involving scraping, pounding, heating, washing, or exposure to chemicals. Some or all are needed to separate the raw fiber from the adhesive gums or resins in which it is ensheathed. Spinning the fiber is made difficult by its brittle quality and low elasticity; and weaving is complicated by the hairy surface of the yarn, resulting from lack of cohesion between the fibers. The greater utilization of ramie depends upon the development of improved processing methods.

Ramie is used to make such products as industrial sewing thread, packing materials, fishing nets, and filter cloths. It is also made into fabrics for household furnishings (upholstery, canvas) and clothing, frequently in blends with other textile fibers (for instance when used in admixture with wool, shrinkage is reported to be greatly reduced when compared with pure wool.) Shorter fibers and waste are used in paper manufacture. Ramie ribbon is used in fine bookbinding as a substitute for traditional linen tape.

For the 2010 Prius, Toyota began using a new range of plant-derived ecological bioplastics made from the cellulose in wood or grass instead of petroleum. One of the two principal crops used is ramie.

Ramie is also used as an ornamental plant in eastern Asia.

China leads in the production of ramie and exports mainly to Japan and Europe. Other producers include Japan, Taiwan, the Philippines, and Brazil.[7] Only a small percentage of the ramie produced is available on the international market. Japan, Germany, France and the UK are the main importers, the remaining supply is used domestically.[2]