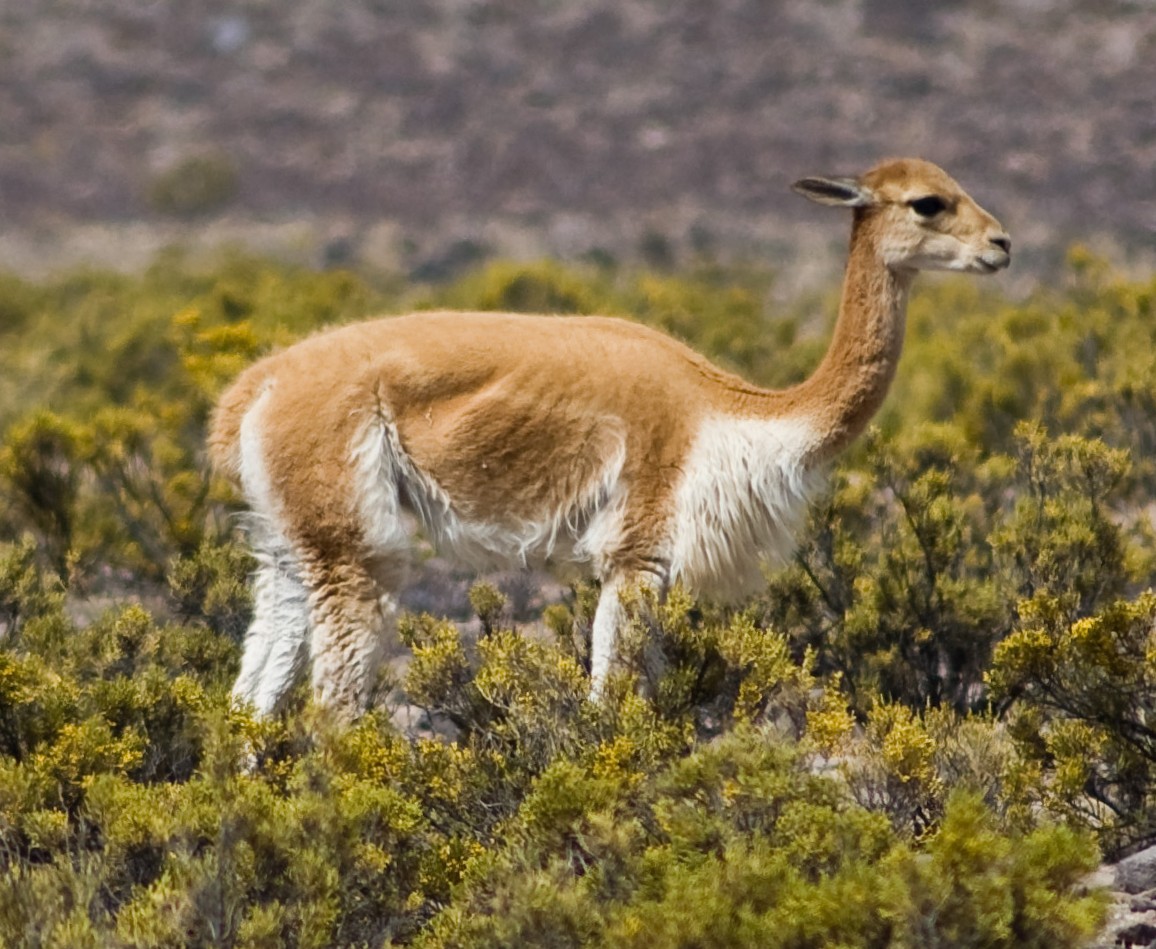 image_width = 250px
regnum = ia
phylum = Chordata
classis = ia
ordo =
familia =
genus = "Vicugna"
species = "V. vicugna"
binomial = "Vicugna vicugna"
binomial_authority = (Molina, 1782)The vicuña ("Vicugna vicugna") is one of two wild s, along with the , which live in the high alpineous areas of the Andes. It is a relative of the and the . Vicuñas produce small amounts of extremely fine wool, which is very expensive because the animal can only be shorn every 3 years. When knitted together, the product of the vicuña's fur is very soft and warm. It is understood that the raised vicuñas for their wool, and that it was against the law for any but royalty to wear vicuña garments.

Both under the rule of the Inca and today, vicuñas have been protected by law. Before being declared endangered in 1974, only about 6,000 animals were left. Today, the vicuña have recovered to about 125,000 but organizations such as the and the U.S. still consider it endangered.

The vicuña is considered more delicate and graceful than the , and smaller. Although their coats may look thin, they are made up of insulating hairs that are softer and warmer than any other animal.Fact|date=May 2008 Its long, woolly coat is tawny brown on the back while the hair on the throat and chest is white and quite long. The head is slightly shorter than the guanaco's and the ears are slightly longer. The length of head and body ranges from 1.45 to 1.60 m (about 5 ft); shoulder height from 75 to 85 cm (around 3 ft); weight from 35 to 65 kg (under 150 lb).

In order to prevent poaching there is a round up every year, and all vicuñas with fur longer than 2-1/2 centimeters are shorn.

Vicuñas live exclusively in South America, primarily in the central Andes. They are most commonly found in , , , and northwest . Peru has the largest number. Bolivia has a great number of wild vicuñas in the southwestern side of the country.

Vicuñas live in the and in the regions at an altitude of 4,000 to 5,500 meters. There are many places they live but one usual place where they can be found is in the grassy plains of the Andes Mountains. In these areas, only nutrient-poor, tough bunch grasses and "" grow. The sun's rays are able to penetrate the thin atmosphere producing relatively warm temperatures during the day; however, the temperatures drop down to freezing at night. The vicuña's thick but soft coat is a special adaptation which traps layers of warm air close to its body so it can tolerate the freezing temperatures there neck or long

The behavior of the vicuña is similar to that of the . Vicuñas are very shy animals and are easily aroused by intruders, due among other things to their extraordinary hearing. Like the guanaco, it will frequently lick calcareous stones and rocks, which are rich in salt, and it will also drink salt water. Its diet consists mainly of low grasses which grow in clumps on the ground.

Vicuñas live in family-based groups made up of a male, and 5 to 15 females and their young. Each group has its own territory of about 18 km², which can fluctuate depending on the availability of food.

usually occurs in March-April, and after a period of about 11 months the female gives birth to a single cria which is nursed for about 10 months; the cria becomes independent at about 12 to 18 months. Young males will form bachelor groups and the young females search for a sorority to join. Along with preventing intraspecific competition, this also prevents inbreeding which can cause a population bottleneck in endangered species as observed with .

Until recently it was thought that the vicuña was not domesticated, and that both the llama and the alpaca were both descendants of the guanaco, a very closely related animal. But recent DNA research has shown that the alpaca may well have vicuña parentage. Today the vicuña is mainly wild, but the local people still perform special rituals with these creatures, including a fertilty ritual.

The fiber is popular due to its warmth. Its warming properties come from the tiny scales that are on the hollow air filled fibers. It causes them to interlock and trap insulating air. At the same time, it is finer than any other wool in the world but since it is sensitive to chemical treatment, the wool is usually left in its natural color.

However, the vicuña will only produce about one pound of wool a year and gathering it required a certain process during the time of the Incas. Vicuña fibers were annually gathered through communal efforts called "chacu". Here, hundreds of thousands of people would herd hundreds of thousands of vicuña into previously laid funnel traps. The animals would be sheared and then released and was only done every four years. The vicuña was believed to be the reincarnation of a beautiful young maiden who received a coat of pure gold once she consented to the advances of an old, ugly king. Because of this, it was against the law for anyone to kill a vicuña or wear its fleece, except for royalty.

From the period of Spanish Conquest to 1974, there was unrestricted hunting of the vicuña and reducing its numbers to only 6,000 in the 1960s. As a result, the species was declared endangered in 1974 and its status prohibited the trade of vicuña fiber. In Andean Bolivia the was founded in 1977 partly as a sanctuary for the species. Their numbers grew to 125,000 in , , , and . Since this was a ready “cash crop” for community members, the countries relaxed regulations on vicuña fiber in 1993 enabling its trade once again. Although the recovery is somewhat comforting, these animals are still classified as vulnerable by the and endangered by the .

At present, the Peruvian government has a labeling system that identifies all garments that have been created through a government sanctioned "chacu". This guarantees that the animal was captured, sheared alive, returned to the wild, and cannot be sheared again for another two years. The program also ensures that a large portion of the profits return to the villagers. However, annually up to 50,000 pounds of vicuña wool are exported as a result of illegal activities. Because of this, some countries have banned the importation of the fiber in order to save the animal. And although it is possible to commercially produce wool from domesticated vicuñas, it is difficult because they tend to escape.

Current prices for vicuña yarns and fabrics can range from $1,800 to $3,000 per yard. Vicuña fiber can be used for apparel (such as socks, sweaters, accessories, shawls, coats, and suits) and home fashion (such as blankets and throws). A scarf costs around $1500 while a man's coat can cost up to $20,000.