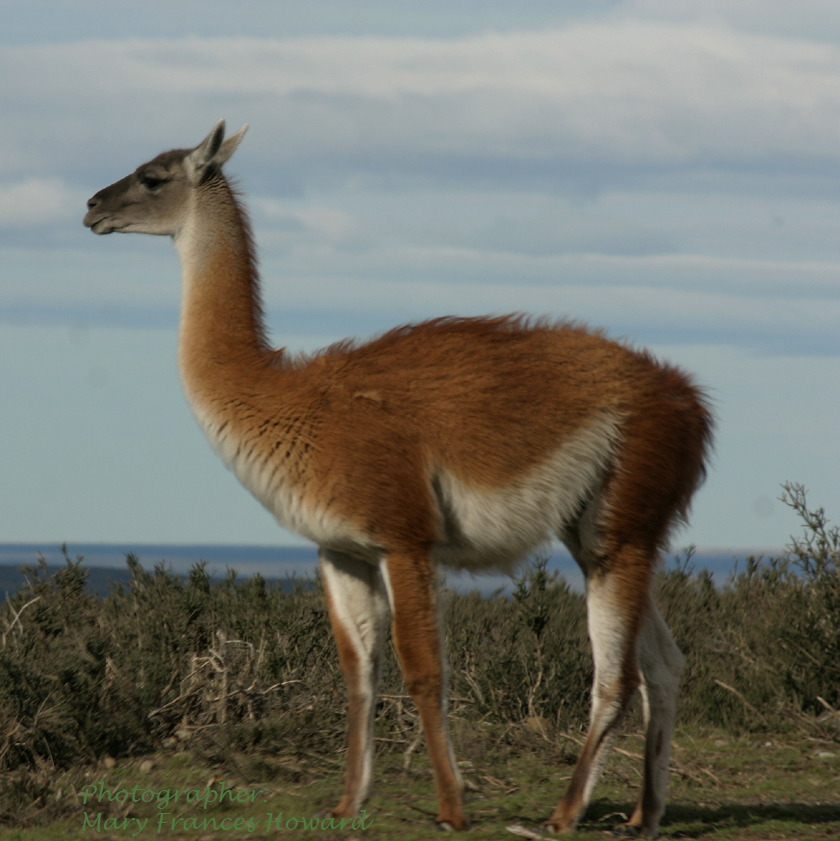 The guanaco ("Lama guanicoe") is a animal native to that stands between 107 and 122 centimeters (3.5 and 4 feet) at the shoulder and weighs about 90 kg (200 lb). The colour varies very little, ranging from a light brown to dark cinnamon and shading to white underneath. Guanacos have grey faces and small straight ears. They are extremely striking with their large, alert brown eyes, streamlined form, and energetic pace. They are particularly ideal for keeping in large groups in open parklands.

The guanaco is native to the arid, mountainous regions of . Guanaco are found in the of , , , , and . In Chile and Argentina they are more numerous in Patagonian regions, in places like the , and in fact has an overpopulation of guanacos. Bolivian Indians have been known to raise guanacos to help them regain their population stability. A guanaco's average life span is 20-25 years.

Current estimates place their numbers at 500,000.

Guanacos live in herds composed of females, their young and a dominant male. Bachelor males form a separate herd. While female groups tend to remain small, often containing no more than ten adults, bachelor herds may have as many as 50 animals present. When they feel threatened, guanacos alert the herd to flee with a high-pitched bleating call. The male will usually run behind the herd in order to defend them. They can run with a speed of 56 km (35 mi) per hour, often over steep and rocky terrain. They are also excellent swimmers. [ [http://animal.discovery.com/guides/mammals/habitat/aridland/guanaco.html Discovery Animal Guides - Guanacos] ] [ [http://www.nal.usda.gov/awic/pubs/llama.htm#top "Information Resources on the South American Camelids: llamas, alpacas, guanacos, and vicunas 1967-2003" ] ]

Guanacos are the largest mammal found in South America. They have only one natural predator, the or puma. Guanacos will often spit when threatened. [ [http://kids.nationalgeographic.com/Animals/CreatureFeature/Guanaco National Geographic] ]

Mating season occurs between November and February, during which males often fight violently to establish dominance and breeding rights. To protect their necks from harm, they have developed thicker skin on their neck, a trait still found in their domestic counterparts, the llama, vicuña, and alpaca . ns use the necks of these animals to make s, flattening and pounding the skin to be used for the soles. After this long process of condensation and compression, the skin becomes very hard. If it is not done properly it can absorb small amounts of water and become slippery to walk on.

Eleven months later, a single calf, or chulengo, is born. Calves are able to walk immediately after birth. Male calves are chased off from the herd at approximately one year of age.

Guanacos are often found at high altitudes, up to 3,962 meters (13,000 feet) above sea level. In order to survive the low oxygen levels found at these high altitudes, a teaspoon of a guanaco's blood contains approximately 68 million red blood cell - 4 times that of a human.

Guanaco fiber is particularly prized for its soft warm feel and is found in luxury fabric. The guanaco's soft wool is second only to that of the vicuña. The pelts, particularly from the calves, are sometimes used as a substitute for red fox pelts because its texture is difficult to differentiate. Like their domestic descendant, the , the guanaco is double coated with a coarse and soft undercoat, which is approximately 16-18 µ in and is finer than the best cashmere. [cite web
url=http://www.llama.org/llama_fiber.htm
work=International Llama Association
title=Llama Fiber
date=
author=Beula Williams]