Scars are areas of fibrous tissue (fibrosis) that replace normal skin after injury. A scar results from the biological process of wound repair in the skin and other tissues of the body. Thus, scarring is a natural part of the healing process. With the exception of very minor lesions, every wound (e.g. after accident, disease, or surgery) results in some degree of scarring. An exception to this is animals with regeneration, which do not form scars and the tissue will grow back exactly as before.

Sherratt et al, explain that scar tissue is the same protein (collagen) as the tissue that it replaces,[1] but the fiber composition of the protein is different; he explains that instead of a random basketweave formation of the collagen fibers found in normal tissue,[1] in fibrosis the collagen cross-links and forms a pronounced alignment in a single direction.[1] This collagen scar tissue alignment is usually of inferior functional quality to the normal collagen randomised alignment. For example, scars in the skin are less resistant to ultraviolet radiation, and sweat glands and hair follicles do not grow back within scar tissue. A myocardial infarction, commonly known as a heart attack, causes scar formation in the heart muscle, which leads to loss of muscular power and possibly heart failure. However, there are some tissues (e.g. bone) that can heal without any structural or functional deterioration.

First attested in English in late 14th century, the word scar derives from Old French escharre, from Late Latin eschara,[2] which is the latinisation of the Greek ἐσχάρα (eskhara), meaning "hearth, fire-place", but in medicine "scab, eschar on a wound caused by burning or otherwise".[3][4]

There are several different kinds of scarring, each caused by differing amounts of collagen over expression. One of the most common types is hypertrophic and keloid scarring,[5] both of which experience excessive stiff collagen bundled growth over extending the tissue, blocking off regeneration of tissues. Another form is atrophic scarring (sunken scarring), which also has an over expression of collagen blocking of regeneration, this scar type is sunken, the collagen bundles do not over extend the tissue. Stretch marks (striae) are regarded as scars to some. 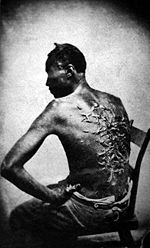 Keloid scarring on the back of an enslaved African; those with darker skin pigmentations are more prone to the development of keloids.

Keloid scars are a more serious form of scarring, because they can carry on growing indefinitely into a large, tumorous (although benign) neoplasm.[5]

Hypertrophic scars are often distinguished from keloid scars by their lack of growth outside the original wound area, but this commonly taught distinction can lead to confusion.[5] All keloid scars are hypertrophic[5] but "only a small percentage of large scars" are keloid.[5] Phenotypic differences exist between keloid scars and hypertrophic scars.[5] Keloid scars can occur on anyone, but they are most common in dark-skinned people.[6] Keloid scars can be caused by surgery, an accident, by acne or, sometimes, from body piercings. In some people, keloid scars form spontaneously. Although they can be a cosmetic problem, keloid scars are only inert masses of collagen and therefore completely harmless and non-cancerous. However, they can be itchy or painful in some individuals. They tend to be most common on the shoulders and chest. Hypertrophic scars and its subset Keloid tend to be more common in wounds closed by secondary intention.[7]

An atrophic scar takes the form of a sunken recess in the skin, which has a pitted appearance. These are caused when underlying structures supporting the skin, such as fat or muscle, are lost. This type of scarring is often associated with acne,[8][9] chickenpox, other diseases (especially staphylococcus [or MRSA] infection), surgery or accidents.

Stretch marks (technically called striae) are also a form of scarring. These are caused when the skin is stretched rapidly (for instance during pregnancy,[10] significant weight gain or adolescent growth spurts),[11] or when skin is put under tension during the healing process, (usually near joints). This type of scar usually improves in appearance after a few years.[10] 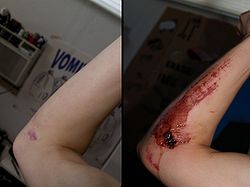 Hypertrophic scarring one year after Road rash on the left, and the original wound on the right.

The scar is a result of the body's repair mechanism after injury on many tissues.

Any injury does not become a scar until the wound has completely healed; this can take many months, or years in the worst pathological cases like keloids. To begin to patch the defect a clot is created; the clot is the beginning process that results in a provisional matrix. In the process the first layer is a provisional matrix and is not scar. Over time the wounded body tissue then over-expresses collagen inside the provisional matrix to create a collagen matrix. This collagen over expression continues and cross-links the fiber arrangement inside the collagen matrix, making the collagen dense. This densely-packed collagen, morphing into an inelastic whitish collagen[14] scar wall, blocks off cell communication and regeneration and as a result, the new tissue that is generated will have a different texture and quality than the surrounding non-wounded tissue. This prolonged collagen-producing process results in a fortuna scar.

The scarring is created by fibroblast proliferation,[14] a process that begins with a reaction to the clot.[15]

The myofibroblast are absent in the first trimester in the embryonic stage which heals scar free;[23] in small incisional or excision wounds less than 2mm that also heal without scarring;[23] and in adult non wounded tissues were the fibroblast in itself is arrested ; however the myofibroblast is found massively in adult wound healing which heals with scar.[21]

As well as the fibroblast proliferation[14] there is prolonged inflammation.

Redness that often follows an injury to the skin is not a scar, and is generally not permanent (see wound healing). The time it takes for this redness to dissipate may, however, range from a few days to, in some serious and rare cases, a few years.[citation needed]

Scars form differently based on the location of the injury on the body and the age of the person who was injured.[citation needed]

Skin Scars: Skin scars occur when the dermis (the deep, thick layer of skin) is damaged. Most skin scars are flat and leave a trace of the original injury that caused them.[citation needed]

Wounds that heal by secondary intention tend to scar worse than wounds closed by primary intention.[7]

Early and effective treatment of acne scarring can prevent severe acne and the scarring that often follows[26] High melanin levels and either African or Asian ancestry may make adverse scarring more noticeable.[27] As of 2004[update] no prescription drugs for the treatment or prevention of scars were available.[28]

Chemical peels are chemicals which destroy the epidermis in a controlled manner, leading to exfoliation and the alleviation of certain skin conditions including superficial acne scars.[29] Various chemicals can be used depending upon the depth of the peel and caution should be used, particularly for dark-skinned individuals and also including individuals susceptible to keloid formation or those with active infections.[30]

Filler injections of Collagen or ArteFill can be used to raise atrophic scars to the level of surrounding skin.[31] Risks vary based upon the filler used, and can include temporary improvement, further disfigurement, and allergic reaction.[32]

Dermabrasion involves the removal of the surface of the skin with specialist equipment and usually involves a local anaesthetic.

Non-ablative lasers such as the 585 nm Pulsed dye laser, 1064 nm and 1320 nm Nd:YAG, or the 1540 nm Er:Glass are used as the standard laser therapy for hypertrophic scars and keloids.[33] This therapy smooths the skin by heating up and redistributing collagen while avoiding damage to the epidermis via contact cooling. Multiple sessions are usually required for a significant reduction in redness and improvement in the texture and pliability of hypertrophic scars and keloids.

Low-dose, superficial radiotherapy is sometimes used to prevent recurrence of severe keloid and hypertrophic scarring. It is thought to be effective despite a lack of clinical trials, but only used in extreme cases due to the perceived risk of long-term side effects.[35]

Silicone scar treatments are commonly used in preventing scar formation and improving existing scar appearance.[36] The effectiveness and safety of silicone sheeting for the treatment and prevention of scars is supported by an abundance of clinical studies.

There have been more controlled clinical trials performed on the treatment of scars using Silicone Gel Sheeting than most other methods.1

Silicone gel sheeting is the only non-invasive option for which evidence-based recommendations have been made for both scar treatment and prevention.

“Overall, the success rate (somewhat improved to greatly improved) for the treatment of hypertrophic and keloid scars is high (95%).”6

Semiocclusive silicone based ointments [37] are used to speed healing and reduce the appearance of scars and likely work in a similar manner as silicone scar sheets.

Pressure dressings are commonly used in managing burn and hypertrophic scars, although supporting evidence is lacking.[38] These involve elastic materials or gauze which apply pressure to the area. For large scars and particularly large burns, pressure garments may be worn. It is believed that they work by applying constant pressure to surface blood vessels and eventually causing scars to flatten and become softer.[citation needed] Retrospective and ultrasonic studies since the 1960s have supported their use, but the only randomized clinical trial found no statistically significant difference in wound healing.[38] Care providers commonly report improvements, however, and pressure therapy has been effective in treating ear keloids.[38] The general acceptance of the treatment as effective may prevent it from being further studied in clinical trials.[38]

A long term course of steroid injections under medical supervision, into the scar may help flatten and soften the appearance of keloid or hypertrophic scars.[39]

Scarring caused by acne (left), and photo 1 day after scar revision surgery. Area around sutures is still swollen from surgery

Scar revision is a process of cutting the scar tissue out. After the excision, the new wound is usually closed up in order to heal by primary intention, instead of secondary intention. Deeper cuts need a multi-layered closure to heal optimally, otherwise depressed or dented scars can result.[41]

Research shows the use of vitamin E and onion extract (sold under Mederma) as treatments for scars is ineffective.[38] Vitamin E causes contact dermatitis in up to 33% of users and in some cases it may worsen scar appearance.[40] Vitamin C and some of its esters also fade the dark pigment associated with some scars.[42]

The permanence of scarring has led to its intentional use as a form of body art within some cultures and subcultures (see scarification). These forms of ritual and non-ritual scarring practices can be found in many groups and cultures around the world.

An intradermal injection of Transforming Growth Factor Beta 3 (TGFβ3) is being tested. The results of three trials already completed were published in the Lancet along with an editorial commentary.[43]

A study implicated the protein Ribosomal s6 kinase (RSK) in the formation of scar tissue and found that the introduction of a chemical to counteract RSK could halt the formation of Cirrhosis. This treatment also has the potential to reduce or even prevent altogether other types of scarring.[44]

A research group in South Africa has a combination approach using a microporous tape in addition to Bulbine frutescens for hydration and Centella asiatica for collagen conversion.[47] A small study has shown an improved appearance of scars.[48]