Scarification
This article is about a body modification method. For the process which encourages germination in plants, see Scarification (botany). 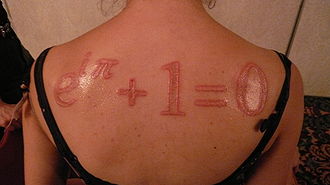 Scarifying involves scratching, etching, burning, or superficially cutting designs, pictures, or words into the skin as a permanent body modification.[1]

In the process of body scarification, scars are formed by cutting or branding the skin. Scarification is sometimes called cicatrization (from the French equivalent).

Scarification is usually more visible on darker skinned people than tattoos. Endorphins can be released in the scarification process that can induce a euphoric state. There are also aesthetic, religious, and social reasons for scarification. Additionally, although infection may be a risk with most forms of scarification, they do not involve the usage of tattoo ink.

Scarification is not a precise practice; variables, such as skin type, cut depth, and how the wound is treated while healing, make the outcome unpredictable. A method that works on one person may not work on another. The scars tend to spread as they heal, so outcome design is usually simple, the details being lost during healing. 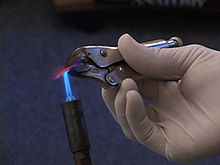 Human branding is one type of scarification. It is similar in nature to livestock branding.

Strike branding
Similar to the process used to brand livestock, [2] a piece of metal is heated and pressed onto the skin for the brand. Historically it was used to claim ownership of slaves or to punish criminals, but as a form of body art, strike branding is less preferable to other types because it is not precise and tends to spread greatly on healing, and is not advisable for curved areas of the body. More successful is the multi-strike brand, done piece by piece rather than all at once. For example, to get a V-shaped brand, two lines would be burned separately by a straight piece of metal, rather than by a V-shaped piece of metal.
Cautery branding
This is a less common form of branding that uses a thermal cautery tool with a heated wire tip to cause the burns.
Laser branding
"Laser" branding is a marketing term coined by Steve Haworth, who pioneered its use in body modification. The technical term is "electrocautery branding". Though it is technically possible to use a medical laser for scarification, this term refers not an actual laser, but rather an electrosurgical/electrocautery unit which uses electricity to cut and cauterize the skin, similar to the way an arc welder works. Electric sparks jump from the hand-held pen of the device to the skin, vaporizing it. This is a more precise form of scarification, because it is possible to greatly regulate the depth and nature of the damage being done to the skin. Whereas with traditional direct branding, heat is transferred to the tissues surrounding the brand, burning and damaging them, electrocautery branding vaporizes the skin so precisely and so quickly that little to no heat or damage to the surrounding skin is caused. This means that pain and healing time after the scarification is complete is greatly lessened.
Cold branding
This rare method of branding is the same thing as strike branding, except that the metal branding tool is subjected to extreme cold (such as liquid nitrogen) rather than extreme heat. This method will cause the hair on the brand to grow back white and will not cause keloiding. 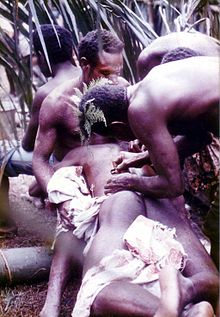 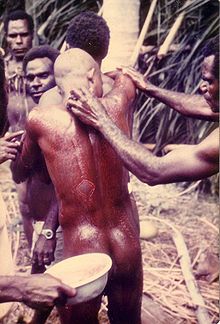 Cutting of the skin for cosmetic purposes is not to be confused with self-harm, which is also referred to by the euphemism "cutting." There may be cases of self-mutilation and self-scarification for non-cosmetic reasons. Lines are cut with surgical blades. Techniques include:

Ink rubbing
tattoo ink (or another sterile coloring agent) is rubbed into a fresh cut. Most of the ink remains in the skin as the cut heals, and will have the same basic effect as a tattoo. As with tattoos, it is important not to pick the scabs as this will pull out the ink. The general public often interprets ink-rubbings as poorly done tattoos.
Skin removal/skinning
Cutting in single lines produces relatively thin scars, and skin removal is a way to get a larger area of scar tissue. The outlines of the area of skin to be removed will be cut, and then the skin to be removed will be peeled away. Scars from this method often have an inconsistent texture.
Packing
This method is uncommon in the West, but has traditionally been used in Africa. A cut is made diagonally and an inert material such as clay or ash is packed into the wound; massive hypertrophic scars are formed during healing as the wound pushes out the substance that had been inserted into the wound. Cigar ash is used in the United States for more raised and purple scars; people may also use ashes of deceased persons[citation needed].
Hatching
similar in appearance to flesh removal this method of scarification relies on using a sterile surgical scalpel to cut into the skin. Where a larger area is required to be scarred you cut with a hatching technique similar to the sketching technique. This method is easier to perform than flesh removal and can be done with one hand which could be beneficial in some situations. While this technique can take longer for larger pieces it is useful for smaller, more detailed designs and enables shading to be used.

Scars can be formed by removing layers of skin through abrasion. This can be achieved using an inkless tattooing device, or any object that can remove skin through friction (such as sandpaper).

Chemical scarification uses corrosive chemicals to remove skin and induce scarring. The effects of this method are typically similar to other, simpler forms of scarification; as a result there has been little research undertaken on this method.

The common practice on healing a scarification wound is use of irritation.

Irritation
Generally, the longer for a wound to heal, the more pronounced the scar will be. Thus, in order to have pronounced scars, the wound may be kept open for a protracted time. This is by abrading scabs and irritating the wound with chemical or natural irritants such as toothpaste or citrus juice. Some practitioners use tincture of iodine which has been proven to cause more visible scarring (this is why it's no longer used for treating minor wounds). With this method, a wound may take months to heal.
Keloids
Keloids are raised scars. Keloiding can be a result of genetics, skin color (darker skin types are more prone to keloiding), or irritation. Keloids are often sought for a visual, 3-D effect and for tactile effects.

Touch-ups
If a scarification does not heal to yield a prescribed outcome, secondary scarifications may be conducted.

An alternative view is described by the acronym LITHA, meaning Leave It The Hell Alone. In body modification this is often considered the best way to reduce the risk of infection and the pain of healing.[citation needed]

Scarification produces harm and trauma to the skin; thus it is considered by many to be not safe. Infection is a concern.[3] Not only do the materials for inducing the wounds need to be sanitary, but the wound needs to be kept clean, using antibacterial solutions or soaps often, and having good hygiene in general.[4] It is not uncommon, especially if the wound is being irritated, for a local infection to develop around the wound. The scarification worker needs to have detailed knowledge of the anatomy of human skin, in order to prevent tools cutting too deep, burning too hot, or burning for too long. Scarification is not nearly as popular as tattooing, so it is harder to find workers experienced in scarification. Precautions are made for brandings, such as wearing masks, because it is possible for diseases to be passed from the skin into the air when the skin is burning, that can lead to death from the tool they use.