Body modification (or body alteration) is the deliberate altering of the human body for any non-medical reason, such as aesthetics, sexual enhancement, a rite of passage, religious reasons, to display group membership or affiliation, to create body art, shock value, or self expression.[1] In its most broad definition it includes plastic surgery, socially acceptable decoration (e.g., common ear piercing in many societies), and religious rights of passage (e.g., circumcision in a number of cultures), as well as the modern primitive movement.

In contrast to the explicit ornaments, the following procedures are primarily not meant to be exposed per se, but rather function to augment another part of the body, like the skin in a subdermal implant. 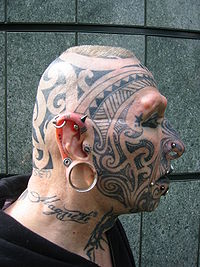 Some sources of controversy stem from the notion of attempting to artificially beautify the natural form of the body, often leading to charges of disfigurement and mutilation. Extreme forms of body modification are occasionally viewed as symptomatic of body dysmorphic disorder, other mental illnesses, or as an expression of unchecked vanity.[21] Unlicensed surgery (i.e. the plastic surgery field) performed outside of a medical environment can often be life-threatening, and is illegal in most countries and states.

"Disfigurement" and "mutilation" (regardless of any appreciation this always applies objectively whenever a bodily function is gravely diminished or lost, as with castration) are terms used by opponents of body modification to describe certain types of modifications, especially non-consensual ones. Those terms are used fairly uncontroversially to describe the victims of torture, who have endured damage to ears, eyes, feet, genitalia, hands, noses, teeth, and/or tongues, including amputation, burning, flagellation, piercing, skinning, and wheeling[citation needed]. "Genital mutilation" is also used somewhat more controversially to describe certain kinds of socially proscribed modifications to the genitals, such as circumcision, female circumcision, castration, and surgeries performed to conform the genitals of individuals with intersex conditions to those of typical males or females[citation needed].