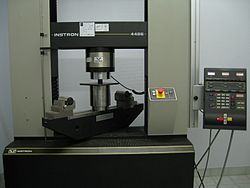 Compression has many implications in materials science, physics and structural engineering, for compression yields noticeable amounts of stress and tension.

By inducing compression, mechanical properties such as compressive strength or modulus of elasticity, can be measured. Scientists and engineers may utilize compression machines to measure the resistance of materials and structures to compression.

Compression machines range from very small table top systems to ones with over 53 MN capacity.[1]

In internal combustion engines it is a necessary condition of economy to compress the explosive mixture before it is ignited: in the Otto cycle, for instance, the second stroke of the piston effects the compression of the charge which has been drawn into the cylinder by the first forward stroke.

The term is applied to the arrangement by which the exhaust valve of a steam engine is made to close, shutting a portion of the exhaust steam in the cylinder, before the stroke of the piston is quite complete. This steam being compressed as the stroke is completed, a cushion is formed against which the piston does work while its velocity is being rapidly reduced, and thus the stresses in the mechanism due to the inertia of the reciprocating parts are lessened. This compression, moreover, obviates the shock which would otherwise be caused by the admission of the fresh steam for the return stroke.