Cirrhosis (pronounced /sɪˈroʊsɪs/) is a consequence of chronic liver disease characterized by replacement of liver tissue by fibrosis, scar tissue and regenerative nodules (lumps that occur as a result of a process in which damaged tissue is regenerated),[1][2][3] leading to loss of liver function. Cirrhosis is most commonly caused by alcoholism, hepatitis B and C, and fatty liver disease, but has many other possible causes. Some cases are idiopathic, i.e., of unknown cause.

Ascites (fluid retention in the abdominal cavity) is the most common complication of cirrhosis, and is associated with a poor quality of life, increased risk of infection, and a poor long-term outcome. Other potentially life-threatening complications are hepatic encephalopathy (confusion and coma) and bleeding from esophageal varices. Cirrhosis is generally irreversible, and treatment usually focuses on preventing progression and complications. In advanced stages of cirrhosis the only option is a liver transplant.

The word "cirrhosis" derives from Greek κιρρός [kirrhós] meaning yellowish, tawny (the orange-yellow colour of the diseased liver) + Eng. med. suff. -osis. While the clinical entity was known before, it was René Laennec who gave it the name "cirrhosis" in his 1819 work in which he also describes the stethoscope.[4]

Some of the following signs and symptoms may occur in the presence of cirrhosis or as a result of the complications of cirrhosis. Many are nonspecific and may occur in other diseases and do not necessarily point to cirrhosis. Likewise, the absence of any does not rule out the possibility of cirrhosis.

As the disease progresses, complications may develop. In some people, these may be the first signs of the disease.

Cirrhosis has many possible causes; sometimes more than one cause is present in the same patient. In the Western World, chronic alcoholism and hepatitis C are the most common causes.

The liver plays a vital role in synthesis of proteins (e.g., albumin, clotting factors and complement), detoxification and storage (e.g., vitamin A). In addition, it participates in the metabolism of lipids and carbohydrates.

Cirrhosis is often preceded by hepatitis and fatty liver (steatosis), independent of the cause. If the cause is removed at this stage, the changes are still fully reversible.

The pathological hallmark of cirrhosis is the development of scar tissue that replaces normal parenchyma, blocking the portal flow of blood through the organ and disturbing normal function. Recent research shows the pivotal role of the stellate cell, a cell type that normally stores vitamin A, in the development of cirrhosis. Damage to the hepatic parenchyma leads to activation of the stellate cell, which becomes contractile (called myofibroblast) and obstructs blood flow in the circulation. In addition, it secretes TGF-β1, which leads to a fibrotic response and proliferation of connective tissue. Furthermore, it secretes TIMP 1 and 2, naturally occurring inhibitors of matrix metalloproteinases, which prevents them from breaking down fibrotic material in the extracellular matrix.[9]

The fibrous tissue bands (septa) separate hepatocyte nodules, which eventually replace the entire liver architecture, leading to decreased blood flow throughout. The spleen becomes congested, which leads to hypersplenism and increased sequestration of platelets. Portal hypertension is responsible for most severe complications of cirrhosis.

The gold standard for diagnosis of cirrhosis is a liver biopsy, through a percutaneous, transjugular, laparoscopic, or fine-needle approach. A biopsy is not necessary if the clinical, laboratory, and radiologic data suggests cirrhosis. Furthermore, there is a small but significant risk to liver biopsy, and cirrhosis itself predisposes for complications due to liver biopsy.[10]

The following findings are typical in cirrhosis:

There is now a validated and patented combination of 6 of these markers as non-invasive biomarker of fibrosis (and so of cirrhosis) : FibroTest.[11]

Other laboratory studies performed in newly diagnosed cirrhosis may include: 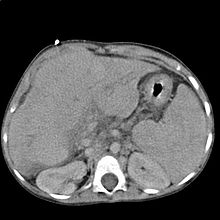 Liver cirrhosis as seen on an axial CT of the abdomen.

Ultrasound is routinely used in the evaluation of cirrhosis, where it may show a small and nodular liver in advanced cirrhosis along with increased echogenicity with irregular appearing areas. Ultrasound may also screen for hepatocellular carcinoma, portal hypertension and Budd-Chiari syndrome (by assessing flow in the hepatic vein).

A new type of device, the FibroScan (transient elastography), uses elastic waves to determine liver stiffness which theoretically can be converted into a liver score based on the METAVIR scale. The FibroScan produces an ultrasound image of the liver (from 20–80 mm) along with a pressure reading (in kPa.) The test is much faster than a biopsy (usually last 2.5–5 minutes) and is completely painless. It shows reasonable correlation with the severity of cirrhosis.[12]

Gastroscopy (endoscopic examination of the esophagus, stomach and duodenum) is performed in patients with established cirrhosis to exclude the possibility of esophageal varices. If these are found, prophylactic local therapy may be applied (sclerotherapy or banding) and beta blocker treatment may be commenced.

Macroscopically, the liver is initially enlarged, but with progression of the disease, it becomes smaller. Its surface is irregular, the consistency is firm and the color is often yellow (if associates steatosis). Depending on the size of the nodules there are three macroscopic types: micronodular, macronodular and mixed cirrhosis. In micronodular form (Laennec's cirrhosis or portal cirrhosis) regenerating nodules are under 3 mm. In macronodular cirrhosis (post-necrotic cirrhosis), the nodules are larger than 3 mm. The mixed cirrhosis consists in a variety of nodules with different sizes.

However, cirrhosis is defined by its pathological features on microscopy: (1) the presence of regenerating nodules of hepatocytes and (2) the presence of fibrosis, or the deposition of connective tissue between these nodules. The pattern of fibrosis seen can depend upon the underlying insult that led to cirrhosis; fibrosis can also proliferate even if the underlying process that caused it has resolved or ceased. The fibrosis in cirrhosis can lead to destruction of other normal tissues in the liver: including the sinusoids, the space of Disse, and other vascular structures, which leads to altered resistance to blood flow in the liver and portal hypertension.[13]

As cirrhosis can be caused by many different entities which injure the liver in different ways, different cause-specific patterns of cirrhosis, and other cause-specific abnormalities can be seen in cirrhosis. For example, in chronic hepatitis B, there is infiltration of the liver parenchyma with lymphocytes;[13] in cardiac cirrhosis there are erythrocytes and a greater amount of fibrosis in the tissue surrounding the hepatic veins;[14] in primary biliary cirrhosis, there is fibrosis around the bile duct, the presence of granulomas and pooling of bile;[15] and in alcoholic cirrhosis, there is infiltration of the liver with neutrophils.[13]

The severity of cirrhosis is commonly classified with the Child-Pugh score. This score uses bilirubin, albumin, INR, presence and severity of ascites and encephalopathy to classify patients in class A, B or C; class A has a favourable prognosis, while class C is at high risk of death. It was devised in 1964 by Child and Turcotte and modified in 1973 by Pugh et al..[16]

The hepatic venous pressure gradient, i.e., the difference in venous pressure between afferent and efferent blood to the liver, also determines severity of cirrhosis, although hard to measure. A value of 16 mm or more means a greatly increased risk of dying.[17]

Generally, liver damage from cirrhosis cannot be reversed, but treatment could stop or delay further progression and reduce complications. A healthy diet is encouraged, as cirrhosis may be an energy-consuming process. Close follow-up is often necessary. Antibiotics will be prescribed for infections, and various medications can help with itching. Laxatives, such as lactulose, decrease risk of constipation; their role in preventing encephalopathy is limited.

Alcoholic cirrhosis caused by alcohol abuse is treated by abstaining from alcohol. Treatment for hepatitis-related cirrhosis involves medications used to treat the different types of hepatitis, such as interferon for viral hepatitis and corticosteroids for autoimmune hepatitis. Cirrhosis caused by Wilson's disease, in which copper builds up in organs, is treated with chelation therapy (e.g., penicillamine) to remove the copper.

Regardless of underlying cause of cirrhosis, alcohol and paracetamol, as well as other potentially damaging substances, are discouraged. Vaccination of susceptible patients should be considered for Hepatitis A and Hepatitis B.

If complications cannot be controlled or when the liver ceases functioning, liver transplantation is necessary. Survival from liver transplantation has been improving over the 1990s, and the five-year survival rate is now around 80%, depending largely on the severity of disease and other medical problems in the recipient.[18] In the United States, the MELD score is used to prioritize patients for transplantation.[19] Transplantation necessitates the use of immune suppressants (cyclosporine or tacrolimus).

In patients with previously stable cirrhosis, decompensation may occur due to various causes, such as constipation, infection (of any source), increased alcohol intake, medication, bleeding from esophageal varices or dehydration. It may take the form of any of the complications of cirrhosis listed above.

Patients with decompensated cirrhosis generally require admission to hospital, with close monitoring of the fluid balance, mental status, and emphasis on adequate nutrition and medical treatment - often with diuretics, antibiotics, laxatives and/or enemas, thiamine and occasionally steroids, acetylcysteine and pentoxifylline. Administration of saline is generally avoided as it would add to the already high total body sodium content that typically occurs in cirrhosis.

Salt restriction is often necessary, as cirrhosis leads to accumulation of salt (sodium retention). Diuretics may be necessary to suppress ascites.

For portal hypertension, propranolol is a commonly used agent to lower blood pressure over the portal system. In severe complications from portal hypertension, transjugular intrahepatic portosystemic shunting is occasionally indicated to relieve pressure on the portal vein. As this can worsen encephalopathy, it is reserved for those at low risk of encephalopathy, and is generally regarded only as a bridge to liver transplantation or as a palliative measure.

High-protein food increases the nitrogen balance, and would theoretically increase encephalopathy; in the past, this was therefore eliminated as much as possible from the diet. Recent studies show that this assumption was incorrect, and high-protein foods are even encouraged to maintain adequate nutrition.[20]

The hepatorenal syndrome is defined as a urine sodium less than 10 mmol/L and a serum creatinine > 1.5 mg/dl (or 24 hourcreatinine clearance less than 40 ml/min) after a trial of volume expansion without diuretics.[21]

Cirrhotic patients with ascites are at risk of spontaneous bacterial peritonitis.

Cirrhosis and chronic liver disease were the 10th leading cause of death for men and the 12th for women in the United States in 2001, killing about 27,000 people each year.[23] Also, the cost of cirrhosis in terms of human suffering, hospital costs, and lost productivity is high.

Established cirrhosis has a 10-year mortality of 34-66%, largely dependent on the cause of the cirrhosis; alcoholic cirrhosis has a worse prognosis than primary biliary cirrhosis and cirrhosis due to hepatitis. The risk of death due to all causes is increased twelvefold; if one excludes the direct consequences of the liver disease, there is still a fivefold increased risk of death in all disease categories.[24]

Little is known on modulators of cirrhosis risk, apart from other diseases that cause liver injury (such as the combination of alcoholic liver disease and chronic viral hepatitis, which may act synergistically in leading to cirrhosis). Studies have recently suggested that coffee consumption may protect against cirrhosis, especially alcoholic cirrhosis.[25]