Alcohol intoxication (also known as drunkenness or inebriation) is a physiological state that occurs when a person or animal has a high level of ethanol (alcohol) in his/her blood.

Also known as 'being heathered' Toxicologists use the term “alcohol intoxication” to discriminate between alcohol and other toxins.

Acute alcohol intoxication results from a very high level of alcohol in the blood. This term is used by health care providers, often in emergencies. 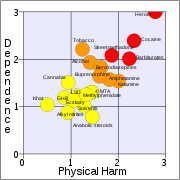 Development of a rational scale to assess the harm of drugs of potential misuse, The Lancet, 2007

Alcohol is metabolized by a normal liver at that rate of about one ounce (one "highball", a normal beer, a regular sized glass of wine) every 90 minutes.[citation needed] An "abnormal" liver with conditions such as hepatitis, cirrhosis, gall bladder disease, and cancer will have a slower rate of metabolism.

Ethanol is metabolised to acetaldehyde by alcohol dehydrogenase (ADH), which is found in many tissues, including the gastric mucosa. Acetaldehyde is metabolised to acetate by acetaldehyde dehydrogenase (ALDH), which is predominantly found in liver mitochondria. Acetate is used by the muscle cells to produce acetyl-CoA using the enzyme acetyl-CoA synthetase, and the acetyl-CoA is then used in the citric acid cycle.[1] It takes roughly 90 minutes for a healthy liver to metabolize a single ounce, approximately one hour per standard unit.

Ethanol's acute effects are largely due to its nature as a central nervous system depressant, and are dependent on blood alcohol concentrations:

As drinking increases, people become sleepy, or fall into a stupor. After a very high level of consumption, the respiratory system becomes depressed and the person will stop breathing. The most important thing for friends who witness someone "passing out" from too much alcohol is to get them emergency medical treatment. Comatose patients may aspirate their vomit (resulting in vomitus in the lungs, which may cause "drowning" and later pneumonia if survived). CNS depression and impaired motor co-ordination along with poor judgement increases the likelihood of accidental injury occurring.[2] It is estimated that about one third of alcohol-related deaths are due to accidents (32%), and another 14% are from intentional injury.[3]

In addition to respiratory failure and accidents caused by effects on the central nervous system, alcohol causes significant metabolic derangements. Hypoglycaemia occurs due to ethanol's inhibition of gluconeogenesis, especially in children, and may cause lactic acidosis, ketoacidosis and acute renal failure. Metabolic acidosis is compounded by respiratory failure. Patients may also present with hypothermia.

In the past alcohol was believed to be a non-specific pharmacological agent, affecting many neurotransmitter systems in the brain.[4] However, molecular pharmacology studies have shown that alcohol has only a few primary targets. In some systems these effects are facilitatory and in others inhibitory.

Among those that are inhibited are: NMDA,[6] dihydropyridine-sensitive L-type Ca2+ channels[8] and G-protein-activated inwardly rectifying K+ channels.[9]

The result of these direct effects are a wave of further indirect effects involving a variety of other neurotransmitter and neuropeptide systems, leading finally to the behavioural or symptomatic effects of alcohol intoxication.[4]

Definitive diagnosis relies on a blood test for alcohol, usually performed as part of a toxicology screen.

There are also various models of breathalyzer units that are available for consumer use. Because these may have varying reliability and may produce different results than the tests used for law-enforcement purposes, the results from such devices should be conservatively interpreted.

Many informal intoxication tests exist, which are generally unreliable and not recommended as deterrents to excessive intoxication or as indicators of the safety of activities such as motor vehicle driving, heavy equipment operation, machine tool use, etc.

For determining whether someone is intoxicated by alcohol by some means other than a blood-alcohol test, it is necessary to rule out out other conditions such as hypoglycemia, stroke, usage of other intoxicants, mental health issues, and so on. It is best if their behavior has been observed while the subject is sober to establish a baseline. Several well known criteria can be used to establish a probable diagnosis. For a physician in the acute treatment setting, acute alcohol intoxication can mimic other acute neurological disorders, or is frequently combined with other recreational drugs that complicate diagnosis and treatment.

Common causes for excessive alcohol consumption include depression, alcoholism, inexperience with controlling the amount of alcohol consumed, lack of self-control, and so on.

The signs and symptoms of alcohol poisoning include:

Emergency treatment for acute alcohol intoxication strives to stabilize the patient and maintain a patent airway and respiration, while waiting for the alcohol to metabolize:[13] Also:

Additional medication may be indicated for treatment of nausea, tremor, and anxiety.

A normal liver detoxifies the blood of alcohol over a period of time that depends on the initial level and the patient's overall physical condition. An abnormal liver will take longer but still succeed, provided the alcohol does not cause liver failure.[14]

People who have been drinking heavily for several days or weeks may have withdrawal symptoms after the acute intoxication has subsided.[15]

A person who consumes a dangerous amount of alcohol persistently can develop memory blackouts and idiosyncratic intoxication or pathological drunkenness symptoms.[16]

Long-term persistent consumption of excessive amounts of alcohol can cause liver damage and have other deleterious health effects.

Laws on drunkenness vary between countries. In the United States, for example, it is a criminal offense for a person to be drunk while driving a motorized vehicle (driving under the influence), operating an aircraft, or (in some states) assembling or operating an amusement park ride.[17] This is also the case in the United Kingdom and many other countries. In some countries it is also an offense to serve alcohol to an already intoxicated person and often alcohol can only be sold by staff qualified to serve responsibly through alcohol server training.

The blood alcohol content (BAC) for legal operation of a vehicle is typically measured as a percent of unit volume of blood. This ranges from a low of 0.00% in Romania and the United Arab Emirates, to 0.05% in Australia, South Africa and Germany, to 0.08% in the United Kingdom, the United States, and New Zealand.[18]

Additionally, the U.S. Federal Aviation Administration prohibits crewmembers from performing their duties with a BAC greater than 0.04%, within 8 hours of consuming an alcoholic beverage or while under the influence of alcohol.[19][20]

In the UK, US, and Australia, people can be arrested for public intoxication, being "drunk and disorderly" or being "drunk and incapable".[21] There are also often legal penalties for the sale of alcoholic beverages to intoxicated persons.[22]

Some Protestant Christian denominations prohibit the drinking of alcohol[27] based upon Biblical passages which condemn drunkenness (for instance, Proverbs 23:21,[28] Isaiah 28:1,[29] Habakkuk 2:15.[30]), but others allow moderate use of alcohol.[31] In some Christian groups, wine is part of the rite of communion (see Christianity and alcohol). However, in The Church of Jesus Christ of Latter-day Saints, alcohol consumption is forbidden,[32] to the point where teetotalism has become a distinguishing feature of its members.

In Vaishnavism, specifically Gaudiya Vaishnavism, one of the four regulative principles forbids the taking of intoxicants, including alcohol.