Cocaine dependence (or addiction) is a psychological desire to regularly use cocaine. It can result in cardiovascular and brain damage such as constricting blood vessels in the brain, causing strokes and constricting arteries in the heart, causing heart attacks [1]specifically in the central nervous system.

The use of cocaine can cause mood swings, paranoia, insomnia, psychosis, high blood pressure, tachycardia, panic attacks, cognitive impairments and drastic changes in the personality that can lead to aggressive, compulsive, criminal and/or erratic behaviors.

Historically, the addiction was known as cocainism.[2]

According to a study of 1081 US residents aged over 11 years who had used cocaine for the first time within 24 months prior to assessment, the risk of becoming cocaine-dependent within 2 years of first use (recent-onset) is 5-6%; after 10 years, it increases to 15-16%. These are the aggregate rates for all types of use considered, i.e., smoking, snorting, injecting. Among recent-onset users, the relative rates are higher for smoking (3.4 times) and much higher for injecting. They also vary, based on other characteristics, such as sex: among recent-onset users, women are 3.3 times more likely to become addicted, compared with men; age: among recent-onset users, those who started using at ages 12 or 13 were 4 times as likely to become addicted, compared with those who started between ages 18 and 20.[3]

However, a study of non-deviant[nb 1] users in Amsterdam found "relative absence of destructive and compulsive use patterns over a ten year period" and concluded that cocaine users can and do exercise control. "Our respondents applied two basic types of controls to themselves: 1) restricting use to certain situations and to emotional states in which cocaine's effects would be most positive, and 2) limiting mode of ingestion to snorting of modest amounts of cocaine, staying below 2.5 grams a week for some, and below 0.5 grams a week for most. Nevertheless, those whose use level exceeded 2.5 grams a week all returned to lower levels."[4]

The immediate craving of the addict for more soon after use is due to the short-lived high that usually subsides within an hour, leading to prolonged, multi-dose binge use. When administration stops after binge use, it is followed by a "crash" (also known as a "come down"), the onset of severely dysphoric mood with escalating exhaustion until sleep is achieved, which is sometimes accomplished by taking sleeping medications, or sedatives, a popular one being Seroquel[citation needed], or by combination use of alcohol and cannabis. Resumption of use may occur upon awakening or may not occur for several days, but the intense euphoria of such use can, as it has in many users, produce intense craving and develop rather quickly into addiction.

Many habitual abusers develop a transient manic-like condition similar to amphetamine psychosis and schizophrenia, whose symptoms include aggression, severe paranoia, and tactile hallucinations (including the feeling of insects under the skin, or "coke bugs, also known as formication.") during binges.[5]

Cocaine has positive reinforcement effects, which refers to the effect that certain stimuli have on behavior. Good feelings become associated with the drug, causing a frequent user to take the drug as a response to bad news or mild depression. This activation strengthens the response that was just made. If the drug was taken by a fast acting route such as injection or inhalation, the response will be the act of taking more cocaine, so the response will be reinforced. Powder cocaine, being a club drug, is mostly consumed in the evening and night hours. Because cocaine is a stimulant, a user will often drink large amounts of alcohol during and after usage or smoke cannabis to dull "crash" or "come down" effects and hasten slumber. Benzodiazepines (e.g., temazepam, alprazolam, clonazepam) are also used for this purpose. Other drugs such as heroin and various pharmaceuticals are often used to amplify reinforcement or to minimize such negative effects, further increasing addiction potential and harmfulness. 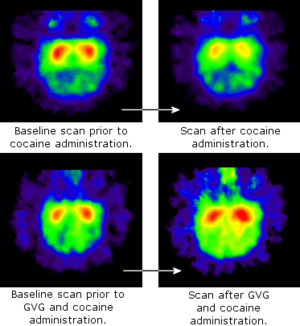 There is a correlation between a variant of the CAMK4 gene and cocaine addiction; a German study found that addicts were 25% more likely to have a variant of the gene than people who did not use cocaine.[10][11]

However, chronic cocaine addiction is not solely due to cocaine reward. Chronic repeated use is needed to produce cocaine-induced changes in brain reward centers and consequent chronic dysphoria. Dysphoria magnifies craving for cocaine because cocaine reward rapidly, albeit transiently, improves mood. This contributes to continued use and a self-perpetuating, worsening condition, since those addicted usually cannot appreciate that long-term effects are opposite those occurring immediately after use.

A study published in May, 2008, in the journal Molecular Psychiatry, detailed the effect of long-term cocaine intake on the amount and activity of thousands of proteins in monkeys. The researchers used “proteomic” technology, which enables the simultaneous analysis of thousands of proteins, to compare the “proteome” (all proteins expressed at a given time) between a group of monkeys that self-administered cocaine and a group that did not receive the drug. The study provides a comprehensive assessment of biochemical changes occurring in the cocaine-addicted brain. The profound changes in structure, metabolism and signaling of neurons may explain why relapse occurs and why it is difficult to reverse these changes after the drug use is discontinued.[12]

On February 14, 2011 two Swiss psychologists, Dr. Geneva Francois Crespo and Dr. Sylvie Petit Jean, published two years of trials and research which demonstrates that gambling along with psychotherapy is the best method to break the cocaine addiction cycle. According to Dr. Crespo - "After cocaine is used, it activates the reward center inside the brain. The brain released euphoric hormones and neurotransmitters such as dopamine, oxytocin and adrenaline which act as a mood enhancer. The same occurs with gambling: the brain perceives a reward from winning or the potential of a reward. The reward causes intense moments of happiness, which compensate for the desire to use cocaine". Further research is being conducted on long term relapse rates.[13][14]

After taking cocaine on a regular basis, the user will almost inevitably become addicted. When the drug is discontinued immediately, the user will experience what has come to be known as a "crash" along with a number of other cocaine withdrawal symptoms, including paranoia, depression, exhaustion, anxiety, itching, mood swings, irritability, fatigue, insomnia, an intense craving for more cocaine, and in some cases nausea and vomiting. Some cocaine users also report having similar symptoms to schizophrenia patients and feel that their mind is lost. Some users also report feeling a crawling sensation on the skin known as "coke bugs". These symptoms can last for weeks or, in some cases, months. Even after most withdrawal symptoms dissipate most users feel the need to continue using the drug; this feeling can last for years. About 30-40% of cocaine addicts will turn to other substances such as medication and alcohol after giving up cocaine. There are various medications on the market to ease cocaine withdrawal symptoms.[15]

Cognitive Behavioral Therapy (CBT) combined with Motivational Therapy (MT) have proven to be effective to treat drug and alcohol addictions. Cocaine vaccines are on trial that will stop desirable effects from the drug.[16] The National Institutes of Health of US, particularly National Institute on Drug Abuse (NIDA) is researching modafinil, a narcolepsy drug and mild stimulant, as a potential cocaine treatment. Twelve-step programs such as Cocaine Anonymous (modeled on Alcoholics Anonymous) are claimed by participants to be helpful in achieving long-term abstinence; however, the 12 step based programs have no statistically-measurable effect and does not release any quantifiable measure of its success rates. Cocaine addiction continues to be the most difficult to manage behind heroin, and according to some scientists, addiction to cocaine may be almost impossible to stop. Citation Needed

Medications that have been investigated include Acetylcysteine,[17][18][19] Baclofen,[20][21] Bupropion,[22] Vanoxerine,[23] and Vigabatrin.[20] Dr. Kim Janda has been working for years on a vaccination that would cure cocaine addiction.[24]