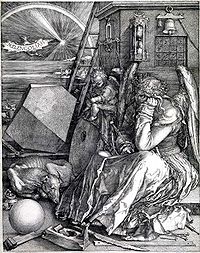 Depression is a state of low mood and aversion to activity that can affect a person's thoughts, behaviour, feelings and physical well-being.[1] Depressed people may feel sad, anxious, empty, hopeless, helpless, worthless, guilty, irritable, or restless. They may lose interest in activities that once were pleasurable, experience loss of appetite or overeating, or problems concentrating, remembering details or making decisions; and may contemplate or attempt suicide. Insomnia, excessive sleeping, fatigue, loss of energy, or aches, pains or digestive problems that are resistant to treatment may be present.[2]

A number of psychiatric syndromes feature depressed mood as a main symptom. The mood disorders are a group of disorders considered to be primary disturbances of mood. These include major depressive disorder (MDD), commonly called major depression or clinical depression, where a person has at least two weeks of depressed mood or a loss of interest or pleasure in nearly all activities; and dysthymia, a state of chronic depressed mood, the symptoms of which do not meet the severity of a major depressive episode. Another mood disorder, bipolar disorder, features one or more episodes of abnormally elevated energy levels, cognition and mood, but may also involve one or more depressive episodes.

Outside the mood disorders, borderline personality disorder commonly features depressed mood, and adjustment disorder with depressed mood is a mood disturbance appearing as a psychological response to an identifiable event or stressor, in which the resulting emotional or behavioral symptoms are significant but do not meet the criteria for a major depressive episode.[3]

Depressed mood can be the result of a number of infectious diseases and physiological problems. For example, mononucleosis, which can be caused by two different viral infections (Epstein-Barr and cytomegalo virus), often results in symptoms that mimic a depressive psychiatric disorder; and depression is often one of the early symptoms of hypothyroidism (reduced activity of the thyroid gland). Disturbed circadian rhythm may contribute to depression. For a discussion of non-psychiatric conditions that can cause depressed mood, see Depression (differential diagnoses).

A 2010 US Centers for Disease Control and Prevention analysis of Behavioral Risk Factor Surveillance System survey data from 2006 and 2008 found nine percent of 235,067 adults surveyed in 45 states, District of Columbia, Puerto Rico, and US Virgin Islands met the criteria for current depression (defined as meeting criteria for either major depression or "other depression" during the 2 weeks preceding the survey); 3.4% met the criteria for major depression. By state, age-standardized estimates for current depression ranged from 4.8% in North Dakota to 14.8% in Mississippi.[4]

A full patient medical history, physical assessment, and thorough evaluation of symptoms helps determine the cause of the depression. Standardized questionnaires can be helpful such as the Hamilton Rating Scale for Depression,[5] and the Beck Depression Inventory.[6]

A doctor generally performs a medical examination and selected investigations to rule out other causes of symptoms. These include blood tests measuring TSH and thyroxine to exclude hypothyroidism; basic electrolytes and serum calcium to rule out a metabolic disturbance; and a full blood count including ESR to rule out a systemic infection or chronic disease.[7] Adverse affective reactions to medications or alcohol misuse are often ruled out, as well. Testosterone levels may be evaluated to diagnose hypogonadism, a cause of depression in men.[8] Subjective cognitive complaints appear in older depressed people, but they can also be indicative of the onset of a dementing disorder, such as Alzheimer's disease.[9][10] Cognitive testing and brain imaging can help distinguish depression from dementia.[11] A CT scan can exclude brain pathology in those with psychotic, rapid-onset or otherwise unusual symptoms.[12] Investigations are not generally repeated for a subsequent episode unless there is a medical indication.

Many forms of treatment are available for depression associated with a mental disorder. Treatments may include cognitive-behavioral therapy, music therapy, art therapy, group therapy, psychotherapy, animal-assisted therapy (also known as pet therapy), physical exercise, medicines such as antidepressants, and keeping a gratitude journal.