The Book of Proverbs (in Hebrew: מִשְלֵי Mish'ley), commonly referred to simply as Proverbs, is a book of the Hebrew Bible. The original Hebrew title of the book of Proverbs is "Míshlê Shlomoh" ("Proverbs of Solomon"). When translated into Greek and Latin, the title took on different forms. In the Greek Septuagint (LXX) the title became "paroimai paroimiae" ("Proverbs"). In the Latin Vulgate the title was "proverbia", from which the English title of Proverbs is derived.

The authorship of Proverbs has long been a matter of dispute. Solomon’s name appears in Proverbs 1:1, "The proverbs of Solomon the son of David, King of Israel." There are also references within Proverbs to Agur (30:1) and Lemuel (31:1) as authors distinct from Solomon. These names are missing in the Greek translation of the Septuagint. Medieval scholars used in the Vulgate the Hebrew rendering of these two verses, and in their eyes the words "Agur" and "Lemuel" were but symbolic names of Solomon.[1] Solomon is often mentioned as someone who has extensive wisdom in the Bible as well as in extra-biblical literature. In 1 Kings 4:32, 3000 proverbs and over 1000 songs are said to have come from Solomon and it is also said that people came from all over the ancient world to hear the wisdom of Solomon. Not only are the names "Agur" and "Lemuel" linked to other sections of the book, there are elements of disunity within the book that suggest more than one author. Some of the authorship is attributed to "Men of Hezekiah" (25:1), though it is stated that they simply transcribed the proverbs rather than writing them of their own accord.

In terms of the text itself there are at least eight specific instances where authorship is mentioned:

Studies of word usage have indicated that the highest percentage of commonalities are between the three Solomon sections. The next most common are the Wise Men sections, showing that they could have influenced Solomon’s writing, and the least commonalities were with the Agur, Lemuel, and the unknown author. A majority of critical scholars, including James L. Crenshaw, Roland E. Murphy and L. G. Perdue, hold to the belief that much of Proverbs was brought together from a time well after Solomon. However, many Conservative Evangelicals continue to attribute most of the book to Solomon, including J. I. Packer, John Piper, John F. MacArthur, and Albert Mohler. 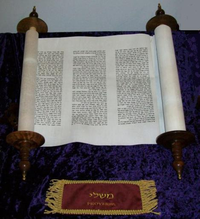 Scroll of the Book of Proverbs

There has been a consensus among scholars that there is a crossover of some Egyptian and Assyrian nature in the proverbs from The Instructions of Amenemopet [3] and Ahiqar.[4]

Throughout Proverbs, wisdom (or the wise person) is compared and contrasted with foolishness (or the fool). 'Fool' in Proverbs indicates one who is lacking in morality and uninterested in correction, not one who is merely silly or playful. Wisdom is held up as something worth effort to attain and the reader is told that it starts with the person of YHWH: "The fear of YHWH is the beginning of wisdom." [5]

In addition, throughout Proverbs, wisdoms are mostly come from father to son or mother to son structure.[6] This wisdom literature is concerned with the realities of human experience, from the mundane to the sublime, and with the relationship between that experience and the divine. Not only that, we can also find many wisdoms of woman over and over, especially we find reference to Wisdom as a female figure who speaks to the young man and invites him into her house. When we talk about this Woman Wisdom, it speaks frequently in the first person [7] and identifies herself not just as the divine companion, but also as the source of order in society and success in life.[8] Over and over in the book of Proverbs, it addressed a warning to the young man to avoid sexual relationships with a foreign or strange woman.[9] In here women as "foreign or "strange" (that is, a stranger, a non-Israelite) reflects the frequent biblical insistence on marriage within the community.

It is difficult to pin down the provenance of Proverbs. Several suggestions have been made.

In the society of ancient Israel, the family played an important role in the upbringing and education of children. Some internal evidence hints to the use of Proverbs in a family setting; the phrase "my son" appears some 20 times throughout the book. The role of the mother is also listed some 10 times.

The name of Solomon stands in the title of the book, thus suggesting a royal setting. Throughout the Old Testament, wisdom is connected with the court.

It is possible practical and reflective wisdom was transmitted in a house of learning or instruction.[10]

There is evidence in the book of Proverbs that can show the type of setting described above. According to Coogan in his Introduction to the Old testament, the authors were most likely writing to a patriarchal society with some evidence of a monarchy. "While generally conventional in its values, the book of Proverbs testifies to some of the ideals of the ancient Israelite law and of the teachings of the prophets of social justice."[11]

Here are some biblical examples of setting:

There are found in Proverbs, and other wisdom literature, references to Wisdom as a personification. These have long been taken by Christian exegetes as references to Christ, who is called the wisdom of God by Paul the Apostle (1 Cor 1:24). The first time Wisdom is personified is at Prov 1.20. In all these passages Wisdom is spoken of as a woman because the Hebrew (chokhmah) and Greek word (sophia) for “wisdom” is itself feminine.[13]

The King James Bible reads, in reference to wisdom in Prov. 8:22, that "The LORD possessed me in the beginning of his way, before his works of old." The Revised Standard Version reads “The LORD created me at the beginning of his work, the first of his acts of old.”[14] Proverbs 8 has long been taken by Christians to refer to Christ, so whether or not the Hebrew קנה(qanah) should be taken as "created" or as "possessed" was used in the debate over the eternity of Christ. Both these meanings are used in the Old Testament but many contemporary scholars render it as "created".[15] Proponents of "possessed" such as Kidner argue that it is absurd to think that God would need to create Wisdom, implying there was a time when he lacked Wisdom. Also, “Prov 8 starts from the indisputable commonplace that God existed before the start of time and ascribes the same precedence to wisdom.”[16] The remainder of Prov 8 they argue, shows Wisdom taking a role in creation, and contrasts Wisdom with created things. However, understanding קנה as possessed leaves open the possibility that Wisdom should be understood here as a personification of an attribute of God rather an entity in its own right.[17] The Hebrew אמון('amown) in Prov. 8:30 is still a subject of debate among Bible scholars. 'Amown has been undestood as either: "artisan or master craftsman" which suggests that Wisdom is an active participant in creation, or as "nursling" which excludes any notion of Wisdom's active participation in creation.[18][19][20]

It has been noted by some Christian exegetes that Col 1:15-16 is dependent on this chapter of Proverbs.[21] The parallels in the roles of Christ and Wisdom, they argue lend credence to understanding qanah as possessed rather than created. They argue that "Wisdom was, before the Lord made even a particle of matter (verse 26) or gave order to creation (verse 29); Wisdom participated in the creation story. This strongly parallels the role of Christ in Colossians, where he is the “first-born of all creation” and in him were all things created. To add to the identification of Wisdom with Christ, we find that Wisdom was identified with the Greek concept of logos, which was in turn identified with Christ."[22]

Prov 8:22 was a crucial verse in the Arian controversies of the fourth century. This verse was used both to support and refute the Arians' claims. Assuming first that Christ could be equated with the "Wisdom of God"(1 Cor. 1:24), the Arians argued that the son, like Wisdom was created, and to be a creature, whether the first or the most prominent of creatures, is to be subordinate to the creator. Those who formulated the Nicean declaration that the Son was "begotten, not made" were inclined to translate קנה in Prov. 8:22 as "begot me" in order to argue that God and Christ were cosubstantial.[17]

Online translations of Book of Proverbs: