The Book of Isaiah (Hebrew: ספר ישעיה‎) is the first of the Latter Prophets in the Hebrew Bible, preceding the books of Ezekiel, Jeremiah and the Book of the Twelve. (The order is somewhat different in the Christian Old Testament).

The book has 66 chapters: the first 39 chapters prophesy doom for a sinful Judah and for all the nations of the world that oppose God, while the last 27 prophesy the restoration of the nation of Israel and a new creation in God's glorious future kingdom;[1] this section includes the Songs of the Suffering Servant, four separate passages referring to the nation of Israel, interpreted by Christians as prefiguring the coming of Jesus Christ.

The oldest surviving manuscripts of Isaiah are two scriolls found among the Dead Sea Scrolls: dating from about a century before the time of Jesus, they are substantially identical with the Masoretic version which forms the basis of most modern English-language versions of the book.[5]:pp.22-23 (Isaiah was the most popular prophet among the Dead Sea collection: 21 copies of the scroll were found in Qumran.) 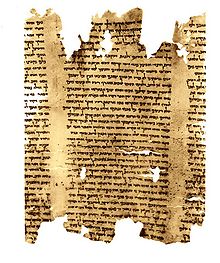 A fragment of the Book of Isaiah found among the Dead Sea Scrolls.

Jewish and Christian tradition held that the entire book is by the 8th century BCE prophet Isaiah, but scholars have concluded since the late 19th century that it cannot be by a single author.[6]:p.1 The observations which have led to this are as follows:[7]

This implied sequence of pre-exilic, exilic and post-exilic material is somewhat misleading, as significant editing has clearly taken place in all three parts.[13]:p.183 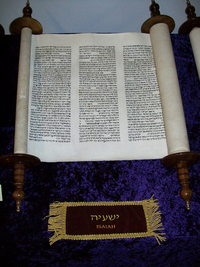 Scroll of Book of Isaiah

Isaiah's first significant acts as a prophet occurred when Judah, under king Ahaz, faced invasion from Israel and Aram Damascus (Syria) after refusing to join them in a revolt against Assyria, the dominant imperial power of the age. Ahaz, against Isaiah's advice to seek the protection of God, invited the Assyrians to protect him, turning Judah into an Assyrian vassal. Israel (the northern kingdom) was consequently destroyed by the Assyrians. On the death of Ahaz, c.715 BCE, his son Hezekiah followed a policy which Isaiah saw as dangerous, waging war on the Philistine cities and on Edom even though territory under direct Assyrian control (i.e., the former kingdom of Israel) now came to within a few miles of Jerusalem. Isaiah's warning that Judah would meet the same fate as Israel was ignored. Eventually Hezekiah revolted against Assyria, and as Isaiah had predicted the country was ravaged by Assyrian armies. Hezekiah then took Isaiah's advice and threw himself on the protection of God, and Jerusalem was saved.[13]:pp.100-107

Proto-Isaiah is divided between verse and prose passages: a currently popular theory is that the verse passages represent the prophecies of the original Isaiah, while the prose sections are "sermons" on his texts composed at the court of Josiah, at the end of the 7th century BCE.[5]:p.4 Chapters 7, 21, and 36-39 appear also in 2nd Kings: it is not known whether the author of Isaiah borrowed them from Kings, or vice-versa.[5]:p.3 Chapters 24-27, known as the "Isaiah Apocalypse",[16][17] are usually thought to be the work of an author who lived long after Isaiah.[5]:p.4

Chapters 1-5 and 28-29 prophesy judgment against Judah. Judah thinks itself safe because of its covenant relationship with God. However, God tells Judah (through Isaiah) that the covenant cannot protect them when they have broken it by the worship of other gods and by acts of injustice and cruelty, which oppose God's law. Chapter 6 describes Isaiah's call to be a prophet of God, and chapters 7-23 contain prophecies against Judah's enemies. Chapters 24-34, while too complex to characterize easily, are primarily concerned with prophecies of a "Messiah", a person anointed or given power by God, and of the Messiah's kingdom, where justice and righteousness will reign. Chapters 36-39 concern Hezekiah's triumph over the Assyrians and his faith in God. It ends with a visit to Hezekiah by envoys from a rebel prince of Babylon, and Isaiah's words prophesying the Babylonian exile.

Two crises occurred between Proto-Isaiah and Deutero-Isaiah. The first was the late 7th century Deuteronomistic reform of official Judean religion under king Josiah, who banned many elements of the old polytheistic cult from the Temple, and the sudden collapse of Assyria and the rise of Babylon to take its place; the second was exile of the royal court, the priests and other members of the ruling elite following the Babylonian destruction of Jerusalem c.586 BCE. Deutero-Isaiah delivered his prophesies to this group, which was actually quite small - the majority of the population stayed in Judah.

By the middle of the 6th century the king of Babylon was Nabonidus. He alienated the powerful priests of Marduk, the official god of Babylon, by taking up the worship of Sin, the god of Harran (a city in northern Mesopotamia), absenting himself for long periods from the city and neglecting crucial ceremonies. He also neglected the rise of powerful new enemies, first the Medes, then the Persians under Cyrus the Great. In 550 BCE Cyrus defeated the Medes, and had allied himself with the priests of Marduk, and the fall of Babylon to the Persians became a real possibility. These events date Deutero-Isaiah's earlier prophecies. Chapters 49-55 probably come from a slightly later period, after Babylon had fallen to Cyrus and the return to Jerusalem became a real possibility.[18]:p.524

Deutero-Isaiah prophesies the deliverance of Israel from the hands of the Babylonians and their restoration in the land promised to them by God. It affirms that the Jews are indeed the chosen people of God and Yahweh is both their national god and the God of the universe (46:9). Cyrus is named as the messiah who will overthrow Babylon and allow the return of Israel (chapter 45:1). The remaining chapters are a vision of the future glory of Zion. A "suffering servant" is referred to (esp. ch. 53) - probably a metaphor for Israel, Christians have traditionally interpreted it as a prophecy of Jesus as the Christ (i.e., Messiah).[19]

Chapters 40-55 fall into two parts, with 40-48 dealing with the rise of Cyrus, while 49-55 are focused on Zion as the wife whom God has renounced and then taken back. The Cyrus chapters are similar in style and theme to the Cyrus cylinder, and it is possible that Deutero-Isaiah was influenced by the propaganda of Cyrus and his supporters, who claimed that the god Marduk had chosen Cyrus to liberate Babylon.[18]:p.524 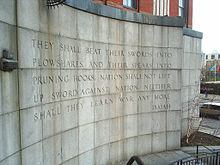 Isaiah 2:4 is taken as an unofficial mission statement by the United Nations. (Isaiah Wall in Ralph Bunche Park, a New York City park near UN headquarters)

The Servant of Yahweh

Second Isaiah contains four passages of “songs of the servant of Yahweh.”

1) 1st / Isa 42:1-4 The servant is the chosen one, given the Spirit to establish justice through the world

2) 2nd / Isa 49:1-6 The servant speaks to the entire world and identifies himself as one called by God before birth

3) 3rd / Isa 50:4-11 The servant declares his confidence in divine help even in the face of physical persecution

4) 4th / Isa 52:13-53:12 The suffering of the servant; how despite his innocence the servant was oppressed “like a lamb that is led to the slaughter,” but his suffering is surrogate like a scapegoat.

The "servant of Yahweh" can be interpreted as any of three plausible characters: the first is an individual chosen by God, like Moses, Hezekiah, Josiah, Cyrus, etc., who is identified as a messianic figure of the future. The second is Israel itself as a personified nation, as shown in Isaiah 49:3 and the third is the remnant of the First Isaiah, the restored Israel from the exile (Isa 46:3).[20]

Isaiah 44:6 contains the first clear statement of monotheism in the Hebrew scriptures: "I am the first and I am the last; besides me there is no god". In Isaiah 44:09-20 this is developed into a satire on the making and worship of idols, mocking the foolishness of the carpenter who worships the idol that he himself has carved. While Yahweh had shown his superiority to other gods before, in Second Isaiah he becomes the sole God of the world. This model of monotheism became the defining characteristic of post-Exilic Judaism, and became the basis for Christianity and Islam.[21]

A central theme in Second Isaiah is that of a new Exodus - the return of the exiled people Israel from Babylon to Jerusalem. The author imagines a ritualistic return to Zion (Judah) led by Yahweh. The importance of this theme is indicated by its placement at the beginning and end of Second Isaiah (40:3-5, 55:12-13). This new Exodus is repeatedly linked with Israel's Exodus from Egypt to Canaan under divine guidance, but with new elements. These links include the following:

Cyrus the Great, the Persian king, conquered Babylon in 539 BCE. One of his first acts was to allow those peoples exiled by the Babylonians (the Jews, among other captive peoples) to return to their respective homes. The Jews, or at least some of them, returned to Jerusalem, and by 515 BCE had rebuilt the Temple. The return, however, was not without problems of its own: the returnees found themselves in conflict with those Jews who had remained in the country and who now owned the land, and there was further conflicts over the form of government that should be set up. This was the background to Trito-Isaiah, who was probably not a single author but a group under the influence of Deutero-Isaiah and his followers.

Trito-Isaiah is not a unity: the majority of scholars regard it as an anthology of about twelve passages, differing in date and/or purpose,[23]:p.394 and it may include material from the First Temple period.[13]:p.183 The contents are correspondingly varied: a confession of sin and a plea to God not to maintain his anger forever (ch.63:7-64:11); a poem on the theme that God has no need of a temple because Heaven is his throne and Earth his footstool (Isaiah 66:1-2); verses setting out conditions for admission to the community; complaints of sin, incompetence and paganism; and distinctions between the "righteous" and the "sinners", foreshadowing the categories used in much later Judaism and early Christianity.[23]:pp.394-5

Isaiah is the most quoted of all the books of the Hebrew Bible outside of the Torah.[24] Of notable importance is Isaiah 7:14, where the prophet is assuring king Ahaz that God will save Judah from the invading armies of Israel and Syria; the sign that will prove this is the forthcoming birth of a child called Emmanuel, "God With Us". While it is suggested by the grammar of the Hebrew that the "young woman" is already pregnant and hence not a virgin,[25] the Greek-speaking 1st century CE author of Matthew 1:23 interpreted it as a prophecy that the messiah would be born of a virgin.

Another important passage was Isaiah 40:3-5, which imagines the exiled Israel proceeding home to Jerusalem on a newly-constructed road, led by the victorious Yahweh who has conquered the gods of Babylon. The vision was taken up by all four Gospels and applied to John the Baptist and Jesus, leading God's people out of exile.[26]

The Bible-based name Jehovah's Witnesses identifies these Christians as a 'people for God's name.' The name Jehovah's witnesses, based on Isaiah 43:10–12, was adopted in 1931. At Isaiah 43:10, as per New World Translation reads: "'You are my witnesses,' is the utterance of Jehovah, 'even my servant whom I have chosen.'"