Josiah
For other people of the same name, see Josiah (given name).

Josiah or Yoshiyahu or Joshua(

/dʒoʊˈsaɪ.ə/ or /dʒəˈzaɪ.ə/;[1][2] Hebrew: יֹאשִׁיָּהוּ, Modern Yoshiyyáhu Tiberian Yôšiyyāhû, literally meaning "healed by Yahweh" or "supported of Yahweh"; Greek: Ιωσιας; Latin: Josias; c. 649–609 BC) was a king of Judah (641–609 BC) who instituted major reforms. Josiah is credited by most historians with having established or compiled important Jewish scriptures during the Deuteronomic reform that occurred during his rule.

He is also one of the kings mentioned in the genealogy of Jesus in the Gospel of Matthew.

Josiah was the son of King Amon and Jedidah, the daughter of Adaiah of Bozkath. His grandfather Manasseh was one of the kings blamed for turning away from the worship of Yahweh. Manasseh adapted the Temple for idolatrous worship. Josiah's great-grandfather was King Hezekiah who was a noted reformer.

Closer view of the inner court and House of the Temple of Solomon (house of the Lord) as depicted in a 3-D computer model. 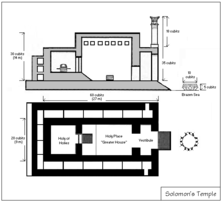 A sketch of the Temple of Solomon (house of the Lord) based on descriptions in the Tanakh.

View of the Temple of Solomon (house of the Lord) with ceiling removed as depicted in a 3-D computer model.

In the eighteenth year of his rule, Josiah ordered the High Priest Hilkiah to use the tax money which had been collected over the years to renovate the temple. It was during this time that Hilkiah discovered the Book of the Law. While Hilkiah was clearing the treasure room of the Temple [10] he found a scroll described as "the book of the Law" [11] or as "the book of the law of Yahweh by the hand of Moses".[10] The phrase "the book of the Torah" (ספר התורה) in 2 Kings 22:8 is identical to the phrase used in Joshua 1:8 and 8:34 to describe the sacred writings that Joshua had received from Moses. The book is not identified in the text as the Torah and many scholars believe this was either a copy of the Book of Deuteronomy or a text that became a part of Deuteronomy as we have it per De Wette's suggestion in 1805.

Hilkiah brought this scroll to Josiah's attention, and the king ordered it read to a crowd in Jerusalem. He is praised for this piety by the prophetess Huldah, who made the prophecy that all involved would die without having to see God's judgment on Judah for the sins they had committed in prior generations.[12][13]

Josiah encouraged the exclusive worship of Yahweh and outlawed all other forms of worship.2 Kings 23 According to the biblical account, Josiah destroyed the living quarters for male cult prostitutes which were in the Temple,[14] and also destroyed pagan objects related to the worship of Baal or Asherah, "and all the hosts of the heavens". Josiah had living pagan priests executed and even had the bones of the dead priests of Bethel exhumed from their graves and burned on their altars, which was viewed as an extreme act of desecration. Josiah also reinstituted the Passover celebrations, of which the Biblical account states had not been observed since before the days of the judges. (2 Kings 23:21-23)

According to 1 Kings 13:1-3 an unnamed "man of God" Iddo had prophesied to King Jeroboam of Israel, approximately three hundred years earlier, that "a son named Josiah will be born to the house of David" and that he would destroy the altar at Bethel. And the only exception to this destruction was for the grave of an unnamed prophet he found in Bethel (2 Kings 23:15-19), who had foretold that these religious sites Jeroboam erected would one day be destroyed (see 1 Kings 13). Josiah ordered the double grave of the "man of God" and of the Bethel prophet to be let alone as these prophecies had come true.

According to the later account in 2 Chronicles, Josiah even destroyed altars and images of pagan deities in cities of the tribes of Manasseh, Ephraim, "and Simeon, as far as Naphtali" (2 Chronicles 34:6-7), which were outside of his kingdom, Judah, and returned the Ark of the Covenant to the Temple.[15] (see List of Artifacts Significant to the Bible).

When Josiah became king of Judah in about 641/640 BC, the international situation was in flux. To the east, the Assyrian Empire was beginning to disintegrate, the Babylonian Empire had not yet risen to replace it, and Egypt to the west was still recovering from Assyrian rule. In this power vacuum, Jerusalem was able to govern itself for the time being without foreign intervention.

In the spring of 609 BC, Pharaoh Necho II personally led a sizable army up to the Euphrates River to aid the Assyrians.[1][2] Taking the coast route Via Maris into Syria at the head of a large army, consisting mainly of his mercenaries, and supported by his Mediterranean fleet along the shore, Necho passed the low tracts of Philistia and Sharon. However, the passage over the ridge of hills which shuts in on the south of the great Jezreel Valley was blocked by the Judean army led by Josiah, who may have considered that the Assyrians and Egyptians were weakened by the death of the pharaoh Psamtik I only a year earlier (610 BC), who had been appointed and confirmed by Assyrian kings Esarhaddon and Assurbanipal.[3] Josiah attempted to block the advance at Megiddo, where the fierce battle was fought and where Josiah was killed. (2 Kings 23:29, 2 Chronicles 35:20-24) Necho then joined forces with the Assyrian Ashur-uballit II and together they crossed the Euphrates and lay siege to Harran. The combined forces failed to capture the city, and Necho retreated back to northern Syria.

There are two accounts of Josiah's death in the Bible. The Books of Kings merely state that Necho II met Josiah at Megiddo and killed him. (2 Kings 23:29) The Book of 2 Chronicles 35:20-27 gives a lengthier account and states that Josiah was fatally wounded by Egyptian archers and was brought back to Jerusalem to die. His death was a result of "not listen[ing] to what Necho had said at God's command..." when Necho stated:

"What quarrel is there between you and me, O king of Judah? It is not you I am attacking at this time, but the house with which I am at war. God has told me to hurry; so stop opposing God, who is with me, or he will destroy you." (NIV)

Josiah did not heed this warning and by both accounts his death was caused by meeting Necho at Megiddo. All Judah and Jerusalem mourned for Josiah. According to 2 Chronicles 35:25, Jeremiah wrote a lament for Josiah's passing (Not in The Book of Lamentations).

After the setback in Harran, Necho left a sizable force behind, and returned to Egypt. On his return march, Necho found that Jehoahaz had been selected to succeed his father, Josiah. (2 Kings 23:31) Necho deposed Jehoahaz, who had been king for only three months, and replaced him with his older brother, Jehoiakim. Necho imposed on Judah a levy of a hundred talents of silver (about 3 3/4 tons or about 3.4 metric tons) and a talent of gold (about 75 pounds or about 34 kilograms). Necho then took Jehoahaz back to Egypt as his prisoner, (2 Chronicles 36:1-4) never to return.

Necho had left Egypt in 609 BC for two reasons: one was to relieve the Babylonian siege of Harran, and the other was to help the king of Assyria, who was defeated by the Babylonians at Carchemish. Josiah's actions suggest that he was aiding the Babylonians by engaging the Egyptian army.

Book of the Law

The Biblical text states that the priest Hilkiah found a "the Book of the Law" in the temple during the early stages of Josiah's temple renovation. For much of the 19th and 20th centuries it was agreed among scholars that this was an early version of the Book of Deuteronomy, but recent biblical scholarship sees it as largely legendary narrative about one of the earliest stages of creation of Deuteronomistic work.[16] According to the Bible Hilkiah gave the scroll to his secretary Shaphan who took it to king Josiah. Historical-critical biblical scholarship generally accepts that this scroll — an early predecessor of the Torah — was written by the priests driven by ideological interest to centralize power under Josiah in the Temple in Jerusalem, and that the core narrative from Joshua to 2 Kings up to Josiah's reign comprises a "Deuteronomistic History" (DtrH) written during Josiah's reign.[17] On the other hand, recent European theologians posit that most of the Torah and Deuteronomistic History was composed and its form finalized during Persian period, several centuries later.[18]

The chief sources of information for Josiah's reign are 2 Kings 22-23 and 2 Chronicles 34-35. Considerable archaeological evidence exists, including a number of "scroll-style" stamps which date to his reign.[citation needed]

The date of Josiah's death can fairly well be established. The Babylonian Chronicle dates the battle at Harran between the Assyrians and their Egyptian allies against the Babylonians from Tammuz (July–August) to Elul (August–September) 609 BC. On that basis, Josiah was killed in the month of Tammuz (July–August) 609 BC, when the Egyptians were on their way to Harran.[19]