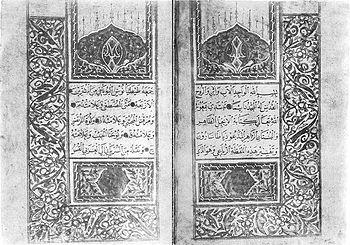 The Diatessaron (c 160 - 175) is the most prominent Gospel harmony created by Tatian, an early Christian apologist and ascetic.[1] The term "diatessaron" is from Middle English ("interval of a fourth") by way of Latin, diatessarōn ("made of four [ingredients]"), and ultimately Greek, διὰ τεσσάρων (dia tessarōn) ("out of four"; i.e., διά, dia, "at intervals of" and tessarōn [genitive of τέσσαρες, tessares], "four"). Tatian combined the four gospels — Matthew, Mark, Luke, and John — into a single narrative.

Tatian's harmony follows the gospels closely in terms of text but puts the text in a new, different sequence. The four gospels differ from one another; like other harmonies, the Diatessaron resolves contradictions. It also omits both the contradictory genealogies in Matthew and Luke. In order to fit all the canonical material in, Tatian created his own narrative sequence, which is different from both the synoptic sequence and John's sequence. Tatian omitted duplicated text, especially among the synoptics. The harmony does not include Jesus' encounter with the adulteress (John 7:53 - 8:11), a passage that some consider not to be original to John.[2] No significant text was added.[citation needed]

Only 56 verses in the canonical Gospels do not have a counterpart in the Diatessaron, mostly the genealogies and the Pericope Adulterae. The final work is about 72% the length of the four gospels put together (McFall, 1994).

In the early Church, the gospels at first circulated independently, with Matthew the most popular.[3] The Diatessaron is notable evidence for the authority already enjoyed by the four gospels by the mid-2nd century.[4] Twenty years after Tatian's harmony, Irenaeus expressly proclaimed the authoritative character of the four gospels. The Diatessaron became a standard text of the gospels in some Syriac-speaking churches down to the 5th century, when it gave way to the four separate Gospels,[4] in the Peshitta version.[5]

Tatian was an Assyrian who was a pupil of Justin Martyr in Rome, where, Justin says, the apomnemoneumata (recollections or memoirs) of the Apostles, the gospels, were read every Sunday. When Justin quotes the synoptic Gospels, he tends to do so in a harmonised form, and Helmut Koester and others conclude that Justin must have possessed a Greek harmony text of Matthew, Luke and Mark.

If so it is unclear how much Tatian may have borrowed from this previous author in determining his own narrative sequence of Gospel elements. It is equally unclear whether Tatian took the Syriac Gospel texts composited into his Diatessaron from a previous translation, or whether the translation was his own. Where the Diatessaron records Gospel quotations from the Jewish Scriptures, the text appears to agree with that found in the Syriac Peshitta Old Testament rather than that found in the Greek Septuagint - as used by the original Gospel authors. The majority consensus is that the Peshitta Old Testament preceded the Diatessaron, and represents an independent translation from the Hebrew Bible. Resolution of these scholarly questions remained very difficult so long as no complete version of the Diatessaron in Syriac or Greek had been recovered; while the medieval translations that had survived - in Arabic, and Latin - both relied on texts that had been heavily corrected to conform better with later canonic versions of the separate Gospel texts. And an ancient commentary in Armenian exists.[6]

There is scholarly uncertainty about what language Tatian used for its original composition, whether Syriac or Greek.[6] Modern scholarship tends to favour a Syriac origin; but even so, the exercise must have been repeated in Greek very shortly afterwards—probably by Tatian himself.

The Diatessaron was used as the standard Gospel text in the liturgy of at least some sections of the Syrian Church for possibly up to two centuries and was quoted or alluded to by Syrian writers. Ephrem the Syrian wrote a commentary on it, the Syriac original of which was rediscovered only in 1957, when a manuscript acquired by Sir Chester Beatty in 1957 (now Chester Beatty Syriac MS 709, Dublin) turned out to contain the text of Ephrem's commentary. The manuscript constituted approximately half of the leaves of a volume of Syriac writings that had been catalogued in 1952 in the library of the Coptic monastery of Deir es-Suriani in Wadi Natrun, Egypt. Subsequently, the Chester Beatty library was able to track down and buy a further 42 leaves, so that now approximately eighty per cent of the Syriac commentary is available (McCarthy 1994). Ephrem did not comment on all passages in the Diatessaron, and nor does he always quote commentated passages in full; but for those phrases that he does quote, the commentary provides for the first time a dependable witness to Tatian's original; and also confirms its content and their sequence. [1].

How the Gospel text that was a standard in Syriac Christianity for possibly as long as two centuries should have utterly disappeared requires explaining. Theodoret, bishop of Cyrrhus on the Euphrates in upper Syria in 423, suspecting Tatian having been a heretic, sought out and found more than two hundred copies of the Diatessaron, which he "collected and put away, and introduced instead of them the Gospels of the four evangelists". Thus the harmonisation was replaced in the 5th century by the canonical four gospels individually, in the Peshitta version, whose Syriac text nevertheless contains many Diatessaronic readings. Gradually, without extant copies to which to refer, the Diatessaron developed a reputation for having been heretical.

Vernacular harmonies derived from the Diatessaron

No Christian tradition, other than some Syriac ones, has ever adopted a harmonized Gospel text for use in its liturgy. However, in many traditions (given the inherent tendency of Christian liturgical texts to ossification), it was not unusual for subsequent Christian generations to seek to provide paraphrased Gospel versions in language closer to the vernacular of their own day. Frequently such versions have been constructed as Gospel harmonies, sometimes taking the Tatian's Diatessaron as an exemplar; other times proceeding independently. Hence from the Syriac Diatessaron text was derived an 11th Century Arabic harmony (the source for the published versions of the Diatessaron in English); and a 13th Century Persian harmony. The Arabic harmony preserves Tatian's sequence exactly, but uses a source text corrected in most places to that of the standard Syriac Peshitta Gospels; the Persian harmony differs greatly in sequence, but translates a Syriac text that is rather closer to that in Ephrem's commentary. The Diatessaron is thought to have been available to Muhammad, and may have led to the assumption in the Koran that the Christian Gospel is one text.[7]

An Old Latin version of Tatian's Syriac text appears to have circulated in the West from the late 2nd century; with a sequence adjusted to conform more closely to that of the canonical Gospel of Luke, and also including additional material (such as the pericope of the adulteress), possibly from the Gospel of the Hebrews. With the gradual adoption of the Vulgate as the liturgical Gospel text of the Latin Church, the Latin Diatessaron was increasingly modified to conform to Vulgate readings.[6] In 546 Victor of Capua discovered such a mixed manuscript; and, further corrected by Victor so as to provide a very pure Vulgate text within a modified Diatessaron sequence, this harmony, the Codex Fuldensis, survives in the monastic library at Fulda, where it served as the source text for vernacular harmonies in Old High German, Eastern Frankish and Old Saxon (the alliterative poem 'Heliand'). The older mixed Vulgate/Diatessaron text type also appears to have continued as a distinct tradition, as such texts appear to underlie surviving 13th-14th century Gospel harmonies in Middle Dutch, Middle High German, Middle French, Middle English, Tuscan and Venetian; although no example of this hypothetical Latin sub-text has ever been identified. This Latin Diatessaron textual tradition has also been suggested as underlying the enigmatic 16th century pro-Muslim Gospel of Barnabas (Joosten, 2002).

The name 'Diatessaron' is Greek for 'through four'; the Syriac name for this gospel harmony is 'ܐܘܢܓܠܝܘܢ ܕܡܚܠܛܐ' (Ewangeliyôn Damhalltê) meaning 'Gospel of the Mixed' while in the other hand we have 'ܐܘܢܓܠܝܘܢ ܕܡܦܪܫܐ' (Evangelion de Mepharreshe) meaning 'Gospel of the separated'. Indeed, the Syrian Church also rejected John's Book of Revelation and the Pastoral Epistles. They were included again only in the middle of the 6th century.[citation needed]

In the tradition of Gospel harmonies, there is another Diatessaron, reportedly written by one Ammonius the Alexandrian, to correct perceived deficiencies in Tatian's. (Note that this Ammonius may or may not be the Ammonius Saccas who taught Origen and Plotinus). None of this revised Diatessaron survives, except as it may have influenced the medieval Arabic and Latin texts that were formerly the only existing reflections of Tatian's work.[citation needed]

In addition, because the Old Testament quotations in the Diatessaron are separately translated from the Hebrew – and hence independent of the Septuagint – these quotations form an important early witness to the vocalisation of the Hebrew Bible.[citation needed]