Short-term effects of alcohol on the human body can take many forms. The drug alcohol, specifically ethanol, is a central nervous system depressant with a range of side effects. The amount and circumstances of consumption play a large part in determining the extent of intoxication; for example, consuming alcohol after a heavy meal causes alcohol to absorb more slowly.[1] Hydration also plays a role, especially in determining the extent of hangovers.[2] The concentration of alcohol in blood is usually measured in terms of the blood alcohol content. Cell membranes are highly permeable to alcohol, so once alcohol is in the bloodstream it can diffuse into nearly every biological tissue of the body. After excessive drinking, unconsciousness can occur and extreme levels of consumption can lead to alcohol poisoning and death (a concentration in the blood stream of 0.40% will kill half of those affected[3][4]). Death can also occur through asphyxiation by vomit. Alcohol is an addictive drug that can greatly exacerbate sleep problems. During abstinence, residual disruptions in sleep regularity and sleep patterns[clarification needed] are the greatest predictors of relapse.[5]

Moderate alcohol consumption 30–60 minutes before sleep, although decreasing sleep onset latency, disrupts sleep architecture.[6] Rebound effects occur once the alcohol has been largely metabolized, causing late night disruptions in sleep maintenance. Under conditions of moderate alcohol consumption where blood alcohol levels average 0.06–0.08 percent and decrease 0.01–0.02 percent per hour, an alcohol clearance rate of 4–5 hours would coincide with disruptions in sleep maintenance in the second half of an 8 hour sleep episode.[6] In terms of sleep architecture, moderate doses of alcohol facilitate "rebounds" in rapid eye movement (REM) and stage 1 sleep; following suppression in REM and stage 1 sleep in the first half of an 8 hour sleep episode, REM and stage 1 sleep increase well beyond baseline in the second half. Moderate doses of alcohol also very quickly increase slow wave sleep (SWS) in the first half of an 8 hour sleep episode.[6] Enhancements in REM sleep and SWS following moderate alcohol consumption are mediated by reductions in glutamatergic activity by adenosine in the central nervous system.[6] In addition, tolerance to changes in sleep maintenance and sleep architecture develops within 3 days of alcohol consumption before bedtime.[6]

Low doses of alcohol (one 360 ml (13 imp fl oz; 12 US fl oz) beer) increase total sleep time and reduce awakening during the night. The sleep-promoting benefits of alcohol dissipate at moderate and higher doses of alcohol.[7] Previous experience with alcohol also influences the extent to which alcohol positively or negatively affects sleep. Under free-choice conditions, in which subjects chose between drinking alcohol or water, inexperienced drinkers were sedated while experienced drinkers were stimulated following alcohol consumption.[8] In insomniacs, moderate doses of alcohol improve sleep maintenance.[9] 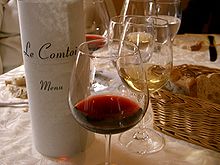 Different concentrations of alcohol in the human body have different effects on the subject.

The following lists the common effects of alcohol on the body, depending on the blood alcohol concentration (BAC). However, tolerance varies considerably between individuals, as does individual response to a given dosage; the effects of alcohol differ widely between people. Hence, BAC percentages are just estimates used for illustrative purposes.

Ethanol inhibits the ability of glutamate to open the cation channel associated with the N-methyl-D-aspartate (NMDA) subtype of glutamate receptors. Stimulated areas include the cortex, hippocampus and nucleus accumbens, which are responsible for thinking and pleasure seeking. Another one of alcohol's agreeable effects is body relaxation, possibly caused by neurons transmitting electrical signals in an alpha waves-pattern; such waves are observed (with the aid of EEGs) when the body is relaxed.[citation needed]

Short-term effects of alcohol include the risk of injuries, violence and fetal damage.[13] Alcohol has also been linked with lowered inhibitions, though it is unclear to what degree this is chemical versus psychological as studies with placebos can often duplicate the social effects of alcohol at low to moderate doses. Some studies have suggested that intoxicated people have much greater control over their behavior than is generally recognized, though they have a reduced ability to evaluate the consequences of their behavior.[14] Behavioral changes associated with drunkenness are, to some degree, contextual.[15][16] A scientific study[weasel words] found that people drinking in a social setting significantly and dramatically altered their behavior immediately after the first sip of alcohol,[citation needed] well before the chemical itself could have filtered through to the nervous system.

Areas of the brain responsible for planning and motor learning are dulled. A related effect, caused by even low levels of alcohol, is the tendency for people to become more animated in speech and movement. This is due to increased metabolism in areas of the brain associated with movement, such as the nigrostriatal pathway. This causes reward systems in the brain to become more active, which may induce certain individuals to behave in an uncharacteristically loud and cheerful manner.

Alcohol has been known to mitigate the production of antidiuretic hormone (ADH), which is a hormone that acts on the kidney, favoring water reabsorption in the kidneys during filtration. This occurs because alcohol confuses osmoreceptors in the hypothalamus, which relay osmotic pressure information to the posterior pituitary, the site of ADH release. Alcohol causes the osmoreceptors to signal that there is low osmotic pressure in the blood, which triggers an inhibition of ADH. Consequently, one's kidneys are no longer able to reabsorb as much water as they should be absorbing, leading to creation of excessive volumes of urine and subsequently overall dehydration.

Acute alcohol intoxication via excessive doses generally causes short- or long-term health effects. NMDA receptors start to become unresponsive, slowing areas of the brain for which they are responsible. Contributing to this effect is the activity which alcohol induces in the gamma-aminobutyric acid (GABA) system. The GABA system is known to inhibit activity in the brain. GABA could also be responsible for the memory impairment that many people experience. It has been asserted that GABA signals interfere with the registration and consolidation stages of memory formation. As the GABA system is found in the hippocampus (among other areas in the CNS) which is thought to play a large role in memory formation, this is thought to be possible.

Anterograde amnesia, colloquially referred to as "blacking out", is another symptom of heavy drinking. This is the loss of memory during and after an episode of drinking.

Another classic finding of alcohol intoxication is ataxia, in its appendicular, gait, and truncal forms. Appendicular ataxia results in jerky, uncoordinated movements of the limbs, as though each muscle were working independently from the others. Truncal ataxia results in postural instability; gait instability is manifested as a disorderly, wide-based gait with inconsistent foot positioning. Ataxia is responsible for the observation that drunk people are clumsy, sway back and forth, and often fall down. It is probably due to alcohol's effect on the cerebellum.

At low or moderate doses, alcohol primarily acts as a positive allosteric modulator of GABAA. Alcohol binds to several different subtypes of GABAA, but not to others. The main subtypes responsible for the subjective effects of alcohol are the α1β3γ2, α5β3γ2, α4β3δ and α6β3δ subtypes, although other subtypes such as α2β3γ2 and α3β3γ2 are also affected. Activation of these receptors causes most of the effects of alcohol such as relaxation and relief from anxiety, sedation, ataxia and increase in appetite and lowering of inhibitions which can cause a tendency towards violence in some people.[17][18][19][20][21][22][23]

Alcohol has a powerful effect on glutamate as well. Alcohol decreases glutamate's ability to bind with NMDA and acts as an antagonist of the NMDA receptor, which plays a critical role in LTP by allowing Ca2+ to enter the cell. These inhibitory effects are thought to be responsible for the "memory blanks" which can occur at levels as low as 0.03% blood level. Additionally, reduced glutamate release in the dorsal hippocampus has been linked to spatial memory loss. Chronic alcohol users experience an upregulation of NMDA receptors because the brain is attempting to reestablish homeostasis. When a chronic alcohol user stops drinking for more than 10 hours, apoptosis can occur due to excitotoxicity. The seizures experienced during alcohol abstinence are thought to be a result of this NMDA upregulation. Alteration of NMDA receptor numbers in chronic alcoholics is likely to be responsible for some of the symptoms seen in delirium tremens during severe alcohol withdrawal, such as delirium and hallucinations. Other targets such as sodium channels can also be affected by high doses of alcohol, and alteration in the numbers of these channels in chronic alcoholics is likely to be responsible for as well as other effects such as cardiac arrhythmia. Other targets that are affected by alcohol include cannabinoid, opioid and dopamine receptors, although it is unclear whether alcohol affects these directly or if they are affected by downstream consequences of the GABA/NMDA effects. People with a family history of alcoholism may exhibit genetic differences in the response of their NMDA glutamate receptors as well as the ratios of GABA-A subtypes in their brain.[24][25][26][27][28][29][30][31][32][33]

Animal models using mammals and invertebrates have been informative in studying the effects of ethanol on not only pharmacokinetics of alcohol, but also in pharmacodynamics, particularly in the nervous system. Ethanol-induced intoxication is not uncommon in the animal kingdom, as noted here:

"Many of us have noticed that bees or yellow jackets cannot fly well after having drunk the juice of overripe fruits or berries; bears have been seen to stagger and fall down after eating fermented honey; and birds often crash or fly haphazardly while intoxicated on ethanol that occurs naturally as free-floating microorganisms convert vegetable carbohydrates to alcohol."[34]

More recently, studies using animal models have begun to elucidate the effects of ethanol on the nervous system. Traditionally, many studies have been performed in mammals, such as mice, rats, and non-human primates. However, non-mammalian animal models have also been employed; in particular, Ulrike Heberlein group at UC San Francisco has used Drosophila melanogaster, the fruit fly, taking advantage of its facile genetics to dissect the neural circuits and molecular pathways, upon which ethanol acts. The series of studies carried in the Heberlein lab has identified insulin and its related signaling pathways as well as biogenic amines in the invertebrate nervous system as being important in alcohol tolerance.[35][36][37] The value of antabuse (disulfiram) as a treatment for alcoholism has been tested using another invertebrate animal model, the honey bees.[38] Importantly, some of the analogous biochemical pathways and neural systems have been known to be important in alcohol's effects on humans, while the possibility that others may also be important remains unknown. Research of alcohol's effects on the nervous system remains a hot topic of research, as scientists inch toward understanding the problem of alcohol addiction.

In addition to the studies carried out in invertebrates, researchers have also used vertebrate animal models to study various effects of ethanol on behaviors.