Driving under the influence

Driving under the influence (DUI) (driving while intoxicated (DWI), drunken driving, drunk driving, operating under the influence, drinking and driving, drink driving, impaired driving) is the act of driving a motor vehicle with blood levels of alcohol in excess of a legal limit. Similar regulations cover driving or operating certain types of machinery while affected by drinking alcohol or taking other drugs. This is a criminal offense in most countries. Details of the offense depend upon the jurisdiction, and may include merely being in physical control of a motor vehicle while being under the influence of alcohol or drugs.[1] Convictions do not necessarily involve actual driving of the vehicle.[2]

In most jurisdictions a measurement such as a blood alcohol content in excess of a defined level, such as 0.05% or 0.08% defines the offense, with no need to prove impairment or being under the influence of alcohol. In some jurisdictions, there is an aggravated category of the offense at e.g. 0.12%. In most countries, anyone who is convicted of injuring or killing someone while under the influence of alcohol or drugs can be heavily fined, as in France, in addition to being given a lengthy prison sentence.

Many states in the U.S. have adopted truth in sentencing laws that enforce strict guidelines on sentencing, different from past practice where prison time was reduced or suspended after sentencing had been issued. 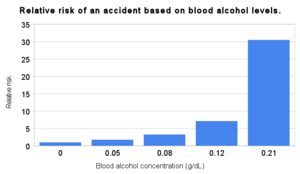 Relative risk of an accident based on blood alcohol levels.[6]

With the advent of a scientific test for blood alcohol content (BAC), enforcement regimes moved to pinning culpability for the offense to strict liability based on driving while having more than a prescribed amount of blood alcohol, although this does not preclude the simultaneous existence of the older subjective tests. BAC is most conveniently measured as a simple percent of alcohol in the blood by weight. It does not depend on any units of measurement. In Europe it is usually expressed as milligrams of alcohol per 100 milliliters of blood. However, 100 milliliters of blood weighs essentially the same as 100 milliliters of water, which weighs precisely 100 grams. Thus, for all practical purposes, this is the same as the simple dimensionless BAC measured as a percent. The per mille (promille) measurement, which is equal to ten times the percentage value, is used in Sweden and Finland.

The validity of the testing equipment/methods and mathematical relationships for the measurement of breath and blood alcohol have been criticized. Studies suggest that certain substances and factors, such as mouth alcohol or recent exposure to industrial compounds can lead to false-positive chemical results. Other studies have suggested that breathalyzers may be inherently biased against women.[7]

Driving while consuming alcohol may be illegal within a jurisdiction. In some it is illegal for an open container of an alcoholic beverage to be in the passenger compartment of a motor vehicle or in some specific area of that compartment. In some it may be illegal to be asleep in the driver's seat of a vehicle without any intention to drive.[8]

The German model serves to reduce the number of accidents by identifying unfit drivers and removing them from traffic until their fitness to drive has been established again. The Medical Psychological Assessment (MPA) works for a prognosis of the fitness for drive in future, has an interdisciplinary basic approach and offers the chance of individual rehabilitation to the offender.[9]

Historically, guilt was established by observed driving symptoms, such as weaving; administering field sobriety tests, such as a walking a straight line heel-to-toe or standing on one leg for 30 seconds; and the arresting officer's subjective opinion of impairment. The officer must correctly perform the Field Sobriety Tests (FSTs) that are approved by the National Highway Transportation Safety Administration (NHTSA). There are only three FSTs approved by NHTSA.[12] The US Department of Transportation explains the Field Sobriety Test as, "a battery of three tests administered and evaluated in a standardized manner to obtain validated indicators of impairment and establish probable cause for arrest."[13] Despite the considerable steps by the NHTSA to create standardized guidelines for the administration and scoring of field sobriety tests, some studies question the reliability of these tests, even when executed according to the guidelines.[14] Starting with the introduction in Norway in 1936 of the world’s first per se law which made it an offense to drive with more than a specified amount of alcohol in the body, objective chemical tests have gradually supplanted the earlier purely judgmental ones. Limits for chemical tests are specific for blood alcohol concentration or concentration of alcohol in breath.

The laws relating to drunk driving vary between countries and varying blood alcohol content is allowed before a conviction is made. Since at least 2004, it has been illegal in all US states and the District of Columbia to drive with a BAC that is 0.08% or higher. Canada adopted similar laws in the 1990s.