A fecal impaction is a solid, immobile bulk of human feces that can develop in the rectum as a result of chronic constipation. 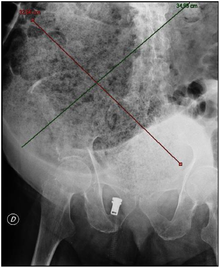 Plain abdominal X-ray showing a huge faecal impaction extending from the pelvis upwards to the left subphrenic space and from the left towards the right flank, measuring over 40 cm in length and 33 cm in width.

Symptoms include chronic constipation. There can be fecal incontinence and paradoxical or overflow diarrhea (encopresis) as liquid stool passes around the obstruction. Complications may include necrosis and ulcers of the rectal tissue. Abdominal pain and bloating could also be present depending on the severity of the condition. Loss of appetite can also occur.

The treatment of fecal impaction requires both the remedy of the impaction and treatment to prevent future recurrences. Decreased motility of the colon results in dry, hard stools that in the case of fecal impaction become compacted into a large, hard mass of stool that can not be expelled from the rectum. Various methods of treatment attempt to remove the impaction by softening the stool, lubricating the stool, or breaking it into pieces small enough for removal. Enemas and osmotic laxatives can be used to soften the stool by increasing the water content until it is soft enough to be expelled. Osmotic laxatives such as magnesium citrate require 4–8 hours for onset of action, and even then they may not be sufficient to expel the stool. Osmotic laxatives can cause cramping and even severe pain as the patient's attempts to evacuate the contents of the rectum are blocked by the fecal mass. Polyethylene glycol (PEG 3500) may be used to increase the water content of the stool without cramping; however since it may take 24 to 48 hours for it to take effect, it is not well suited to cases where the impaction needs to be removed immediately due to risk of complications or severe pain. Enemas (such as hyperosmotic saline) and suppositories (such as glycerine suppositories) work by increasing water content and stimulating peristalsis to aid in expulsion, and both work much more quickly than oral laxatives. Since enemas work in 2–15 minutes they do not allow sufficient time for a large fecal mass to soften, and even if the enema is successful at dislodging the impacted stool, it may remain too large to be expelled through the anal canal. Mineral oil enemas can assist by lubricating the stool for easier passage. In cases where enemas fail to remove the impaction polyethylene glycol can be used to attempt to soften the mass over 24–48 hours, or if immediate removal of the mass is needed manual disimpaction may be used. Manual disimpaction may be performed by lubricating the anus and using one digit with a scoop-like motion to break up the fecal mass. Most often manual disimpaction is performed without general anesthesia although sedation may be used. In more involved procedures general anesthesia may be used, although the use of general anesthesia increases the risk of damage to the anal sphincter. If all other treatments fail surgery may be necessary.

Individuals who have had one fecal impaction are at high risk of future impactions. Therefore, preventative treatment should be instituted in patients following the removal of the mass. Increasing dietary fiber, increasing fluid intake, daily exercise, and regular attempts to defecate every morning after eating should be promoted in all patients. Often underlying medical conditions cause fecal impactions, and these conditions should be treated to reduce the risk of future impactions. Many types of medications (most notably opioid pain medications, such as codeine) reduce motility of the colon, increasing the likelihood of fecal impactions. If possible, alternate medications should be prescribed that avoid the side effect of constipation. Given that all opioids can cause constipation, it is recommended that any patient placed on opioid pain medications should be given medications to prevent constipation before it occurs. Daily medications can also be used to promote normal motility of the colon and soften stools. Daily use of laxatives should be avoided by most individuals as it can cause the loss of normal colon motility. However for patients with chronic complications, daily medication under the direction of a physician may be needed. Polyethylene glycol 3350 can be taken daily to soften the stools without the significant risk of adverse effects that are common with other laxatives. In particular, stimulant laxatives should not be used frequently since they can cause dependence in which an individual loses normal colon function and is unable to defecate without taking a laxative. Frequent use of osmotic laxatives should be avoided as well as they can cause electrolyte imbalances.

There are many possible causes; for example, physical inactivity, not eating enough (particularly of fiber), and not drinking enough water. Medications such as narcotic pain relievers (codeine, oxycodone, hydrocodone, tramadol, etc) and certain sedatives that reduce intestinal movement may cause fecal matter to become too large, hard and/or dry to expel.

Manual removal of a fecal impaction is often required with obese patients in traction, after a barium enema, and in poorly hydrated older adults.