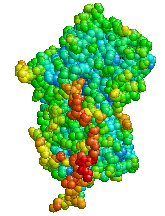 Symptoms of alpha-1 antitrypsin deficiency include shortness of breath, wheezing, , and . The patient's symptoms may resemble recurrent respiratory infections or that does not respond to treatment. Individuals with A1AD may develop during their thirties or forties even without a history of significant smoking, though smoking greatly increases the risk for emphysema. A1AD also causes impaired liver function in some patients and may lead to and (15%). It is the leading cause of in newborns.

"Please see for a discussion of the various s and s associated with A1AD."

(A1AT) is produced in the , and one of its functions is to protect the lungs from the neutrophil elastase enzyme, which can disrupt connective tissue. Normal blood levels of alpha-1 antitrypsin are 1.5-3.5 gm/l. In individuals with PiSS, PiMZ and PiSZ s, blood levels of A1AT are reduced to between 40 and 60 % of normal levels. This is sufficient to protect the lungs from the effects of in people who do not smoke. However, in individuals with the PiZZ phenotype, A1AT levels are less than 15 % of normal, and patients are likely to develop at a young age; 50 % of these patients will develop liver cirrhosis, because the A1AT is not secreted properly and instead accumulates in the liver. A in such cases will reveal PAS-positive, -negative granules.

smoke is especially harmful to individuals with A1AD. In addition to increasing the inflammatory reaction in the s, smoke directly inactivates by oxidizing essential residues to forms, decreasing the activity by a factor of 2000.

In the United States, Canada, and several European countries, lung-affected A1AD patients may receive intravenous infusions of alpha-1 antitrypsin, derived from donated human plasma. This augmentation therapy is thought to arrest the course of the disease and halt any further damage to the lungs. Long-term studies of the effectiveness of A1AT replacement therapy are not available. It is currently recommended that patients begin augmentation therapy only after the onset of emphysema symptoms.

Augmentation therapy is not appropriate for liver-affected patients; treatment of A1AD-related liver damage focuses on alleviating the symptoms of the disease. In severe cases, liver transplantation may be necessary.

As α1-antitrypsin is an acute phase reactant, its transcription is markedly increased during elsewhere in response to increased -1 and 6 and TNFα production. Any treatment that blunts this response, specifically (acetaminophen), can delay the accumulation of A1AT polymers in the liver and (hence) . A1AD patients are therefore encouraged to use paracetamol when slightly to moderately ill, even if they would otherwise not have used s.

Treatments currently being studied include recombinant and inhaled forms of A1AT. Other experimental therapies are aimed at the prevention of formation in the .

People of northern European, Iberian and n ancestry are at the highest risk for A1AD. Four percent carry the PiZ ; between 1 in 625 and 1 in 2000 are homozygous.

The link with liver disease was made six years later, when Sharp "et al" described A1AD in the context of liver disease.